The CWL Pro League Qualifiers (PLQ) saw the most dominant teams in Call of Duty secure their spot in the regular season, but players who didn’t make the cut voiced their frustration over the format of the event, to which one analyst had a lot to say about.

The PLQ saw tumultuous results across the board as notable teams such as FaZe Clan, Lightning Pandas, Mindfreak, and more failed to make their mark and lock their place in the Pro League.

During a broadcast of the CWL talk show Trading Shots, former pro player and now analyst Jonathan ‘Pacman’ Tucker destroyed players who lashed out at the PLQ format that prevented them from participating in the Pro League.

Teams had four days of Round Robin pool play to decide their own fate, before a double elimination bracket consisting of the teams that placed third through fifth in their pool battled it out for the remaining spots. Yet, players were still frustrated that the qualifiers were too limited in scope. 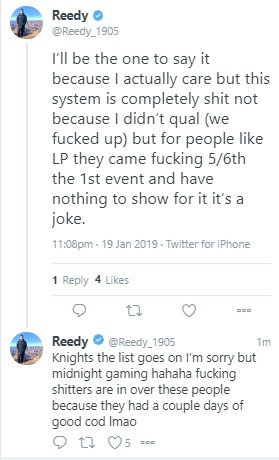 The Imperial’s Reedy shared his thoughts on the PLQ format in a since deleted tweet.

The panelist shared some of his history with pro competitions but put the spotlight back on the players who shared their displeasure with the league.

“I want to address players complaining about the PLQ format. I hated it. There’s been times in the past, I qualified, was dropped from my team and never had a chance to get back,” Pacman said. “(Show host) Merk played one match to get into the league, lost that match, couldn’t get into the league. You guys had a whole week, four days to qualify, you didn’t do it. And then the first thing you do is to go back and blame the format? That shows a giant lack of self-awareness. It’s kind of pathetic actually.”

Pacman leaves no room for interpretation with ripping words toward those that feel the competition had a skewed format that saw up and coming teams nab a qualifying spot.

The qualifying teams will play in the CWL Pro League starting February 4, while the second stand-alone tournament, that will feature Pro League qualified teams, CWL Fort Worth kicks off March 15.