Jordan ‘ProoF’ Cannon has announced his intention to return to competition for the Black Ops 4 season.

A legend of the game, ProoF hasn’t been as present at the highest level of Call of Duty in recent years, competing at only three events in total over the past two seasons.

While away from the stage ProoF focused primarily on building his brand as a content creator, joining OpTic Gaming in that capacity for some time, and also appeared as a guest analyst for some major tournaments. For the upcoming season, however, ProoF will return to competition. 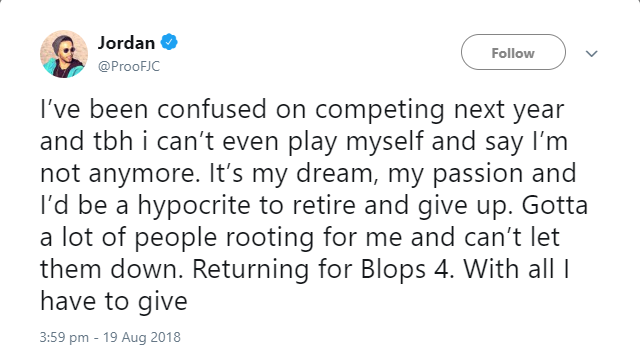 This won’t be the first time that ProoF has attempted to return to professional play after an absence. He originally stepped away from competing at the start of the Infinite Warfare season, but returned at the start of WWII. After two unsuccessful open events, ProoF once again took a break from the game.

ProoF would not be the first veteran to successfully make a come-back after a period of absence, however. Most notably, James ‘Replays’ Crowder returned from coaching FaZe Clan to competing for them in a season highlighted by a victory in the CWL Pro League Stage 1 and a third-place CWL Championship placement, while Doug ‘Censor’ Martin also reached the CWL Pro League in his return this season.

Black Ops 4 releases on October 12, with the first event of the new season, CWL Las Vegas, taking place December 7-9. With the WWII season concluded, teams are already starting to consider their options for the upcoming year, with both compLexity and 100Thieves already expressing interest in starting roster negotiations.