The latest Black Ops 4 patch is finally bringing the Shamrock & Awe seasonal event to PC and Xbox One players while introducing a new Gauntlet and Blackout mode to the rest of the community.

The new update will usher in the latest playlists for Multiplayer that will bring loads of new ways to mix up the Call of Duty formula as well as bring notable fixes to the popular shooter.

Most of the new content in the update is going to impact PC and Xbox players, but Playstation 4 players will be getting a couple of new additions in the form Stockpile and Domination being added to the Featured Playlists.

All platforms will be getting a fix to the Cha-Ching and Secret Santa weapons to make their melee ranges more similar to the Combat Knife. As well as rectifying a few bugs that have been cropping up in Blackout’s Shamrock & Awe Easter Egg.

Now that the seasonal event is live for PC and Xbox One, players can claim the St. Patrick’s Day Gesture and Calling Card for free in the Black Market. 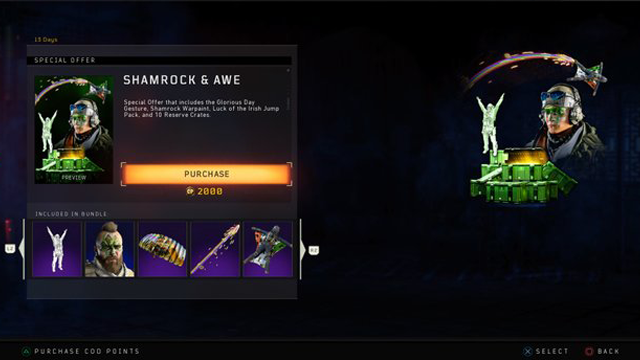 The latest update is bringing tons of seasonal content in and out of games.

Additionally, Multiplayer has received the St. Patrick’s Stockpile mode that gives the traditional game a festive twist. The event is also affecting Zombies and Blackout by adding green-eyed undead along with an Easter Egg in the Classic Chaos maps, while bringing a fresh take to the battle royale map for the changing season.

Though the fun and games is going to get a lot more intense now that Hardcore Blackout has made its way to PC and Xbox that takes away a ton of HUD help and brings a fresh new take of notifying where the zone will end up.

Zombies players will be squaring off in Blood of the Dead for the new Hellcatraz Gauntlet which will have varying challenges for 30 grueling rounds.

Additionally, Treyarch confirmed that the next Zombies story, entitled ‘Ancient Evil,’ will arrive on March 26 with the next major Black Ops 4 update.

For the whole breakdown of the March 19 update, read the full patch notes, courtesy of Treyarch, below:

The chilling next chapter of the Black Ops 4 Zombies saga unfolds next week on PS4 with “Ancient Evil”, the final Chaos story experience of the current Zombies season. We’ve got much more to share over the next week, with the world premiere of the gameplay trailer just around the corner.

And just in case you missed this morning’s teaser… Delphi awaits.

Shamrock & Awe continues on PS4 and arrives today on Xbox One and PC, bringing free seasonal content to Multiplayer, Blackout, and Zombies!

These limited-time updates include St. Patrick’s Stockpile in Multiplayer, Hardcore Mode along with the Homunculus Leprechauns and his Pot-o-Gold in Blackout, green-eyed zombies that come with their own new seasonal Easter Egg in Zombies, and free personalization items for logging in during the event.

Enjoy these seasonal in-game goodies during the month of March as we prepare for our next major game update on March 26, including all-new experiences in Multiplayer, Blackout, and Zombies.

We’ve also made some updates across all modes today on PC as a result of player feedback:

Read on below for today’s updates: