2x World Champion Bryan “Apathy” Zhelyazkov has his own theory on who the infamous CoD Burner is, and thinks they could be much more fiendish that first thought.

If unaware, the CoD Burner account is a Reddit user who earlier in the 2018 season began leaking numerous roster moves and behind the scenes info about CoD esports pro players, teams and the CWL at large.

What gave the CoD Burner credence, was that their initial ‘leaks’ were almost all accurate, and players themselves have confirmed that the individual certainly knows more than the average fan – perhaps even a player themselves.

But, after a lot of digging, no concrete evidence has come up as to the CoD Burner’s identity, and there are few leads to follow.

Therefore, Apathy has come to the conclusion that it may not in fact be an individual with any insider knowledge through a position in the industry or with an organization – but could instead just be a hacker.

With lots of conversations had in private via Twitter DM’s between professional players and organizations, Apathy suggests that perhaps someone has gained access to these, and is using it to spread information. 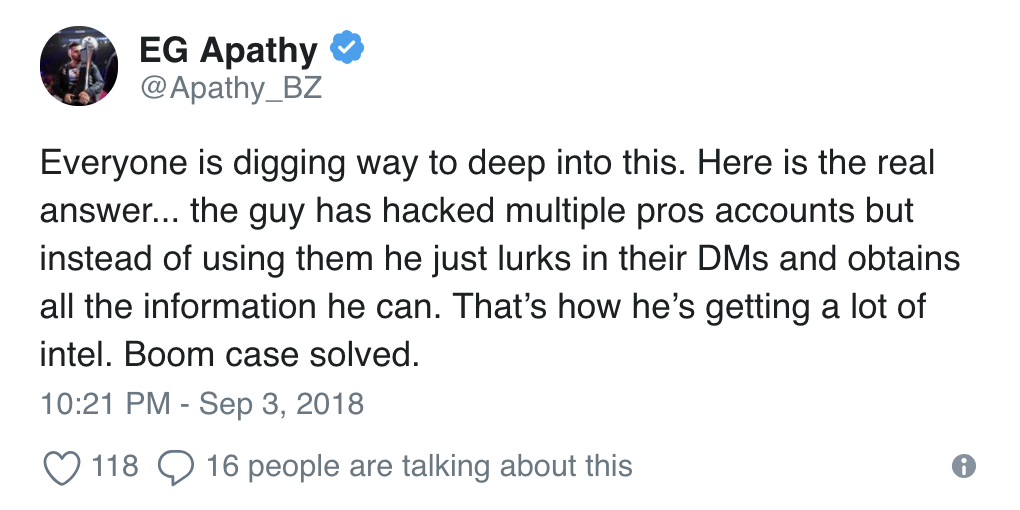 Apathy’s suggestion may be slightly tongue-in-cheek, as it’s unlikely that all of the information being shared, or ‘leaked’, by the CoD Burner would be available in Twitter DM’s.

For now, the focus is still firmly on either a professional player or a close friend or associate. However, Apathy could be right in saying that this information is not simply falling into their lap.

The CoD Burner would likely have to actively seek out some of the information they are spreading – although hacking Twitter accounts could be a step too far.