ACHES Offers to Help Buy Amateur Players out of Contracts

Evil Geniuses captain Patrick “ACHES” Price has made a peculiar offer to amateur esports players who are stuck in contracts, pledging to invest in them for the long run.

ACHES, now a two time Call of Duty World Champion thanks to his win in August with Evil Geniuses, is offering to buy players out of their contracts, provided he is reimbursed three years down the line – with interest added of course.

It is unclear if he is referring specifically to players in Call of Duty, or in any esport title. The Fortnite scene particularly is enjoying a boom in young talent, some of which is being snapped up by organizations locking them into contracts.

A young Fortnite team recently accused their organization of failing to pay the agreed salary, but also not allowing them to leave by enforcing the rules stipulated in the contract.

In Call of Duty, similar issues have cropped up over the years, with players signing contracts which are perhaps ill-advised. In fact, it has occurred in one way or another in almost every major esport.

ACHES seems to be serious about his offer, stating he will cover the contract buyout and allow the player to play for whatever team offers them a spot. 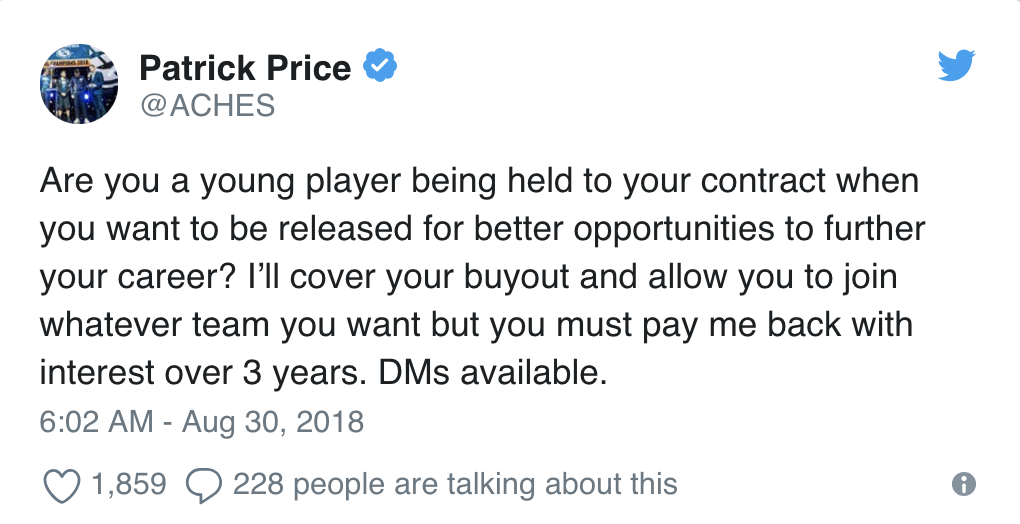 As for the interest he mentions, which would accrue over the three year period, he says the exact percentage would depend on the amount of the buyout.

It would be an investment for both ACHES and the player themselves, who would essentially be investing in their own future.

Occasionally however, and depending on specific contracts, teams are not obliged to accept buyout propositions, even if the full amount is formally offered.

This was reportedly the case with CS:GO players s1mple and flamie, whom SK Gaming apparently attempted to buyout, but Natus Vincere refused their offer.