The Striker 45 SMG is one of two new weapons in Call of Duty: Modern Warfare Season 2, and we’ve put together our five best loadouts and attachment combinations that suit various playstyles.

The February 11 launch of Season 2 introduced a lot of new content in Modern Warfare, including several new maps, modes, another Battle Pass, and two new weapons – the Striker 45 and Grau 5.56.

The Striker is described in-game as “a hard-hitting SMG chambered in .45 Auto that will shred at longer distances when compared to other weapons in its class.” It features a “moderate” rate of fire that “keeps the gun in control while fully automatic.”

The Striker 45 SMG was introduced in Modern Warfare as part of the Season 2 Battle Pass.

In order to unlock it, you must reach Tier 31 of the Season 2 Battle Pass. But don’t worry, the weapon is part of the free portion of the Pass, meaning you won’t have to pay a dime to obtain it unless you don’t feel like grinding the game to level up.

Eagle-eyed CoD fans will notice this SMG strongly resembles the iconic UMP45 from Modern Warfare 2 (they even feature the same number), which we had included in our list of 5 classic CoD weapons that could be brought back in Season 2.

Much like the UMP45, this 2020 variant packs a powerful punch at all kinds of ranges, which is why we’ve put together some classes that cater to different playstyles: run-and-gun, slow and longer-range, balanced, stealthy, and Overkill. If you like to play aggressively and get in the faces of the enemy team, then this Striker 45 build is for you. All of the attachments work together to maximize mobility while not compromising control, and the 45 Round Mags should keep you from having to reload between every gunfight.

Double Time, Combat Knife, and Dead Silence all have speed-increasing properties, and the Tune Up perk ensures that you get your Field Upgrade as many times as possible during every match.

You’ll definitely want Stim for this class, since you’ll constantly be in and out of engagements and might not have enough time in between to heal normally. 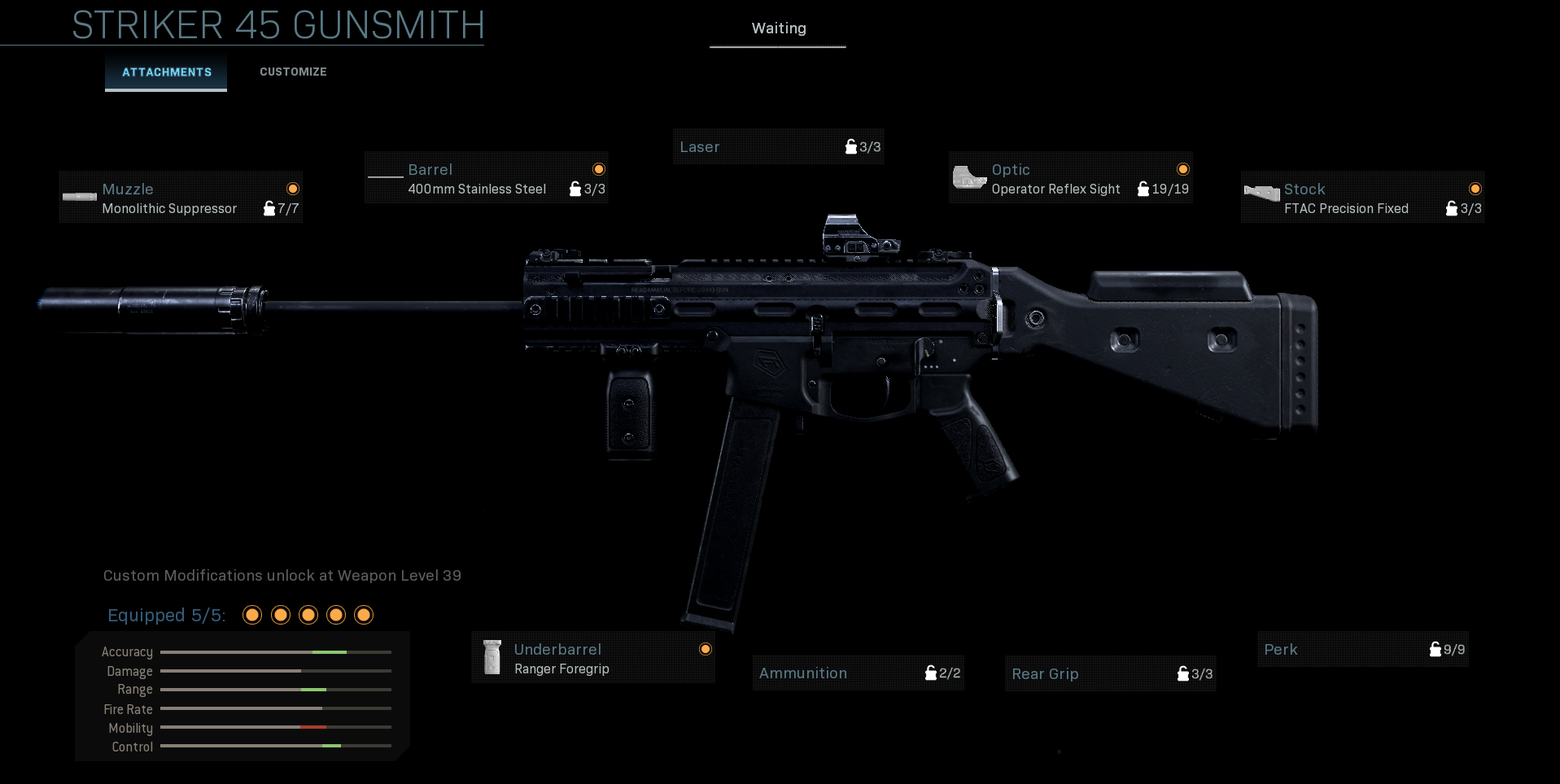 As its in-game description suggests, the Striker 45’s stats and functionality actually make it one of the better SMGs when it comes to longer-range play, and when fitted with the right attachments, it can almost be turned into an assault rifle.

In this class, the attachments all help strongly boost accuracy, range, and control, the three stats needed for that kind of playstyle. Mobility is severely decreased, but if your plan is to play slower and engage and longer distances, that won’t be too much of an issue.

High Alert ensures that if any enemies try to sneak up on you from blind spots, you’ll know immediately, and you can also cover your own back with the pair of Claymores that the Shrapnel perk provides.

Munitions Box is a good Field Upgrade for this class because you can run out of ammo quick trying to shoot opponents at long range. 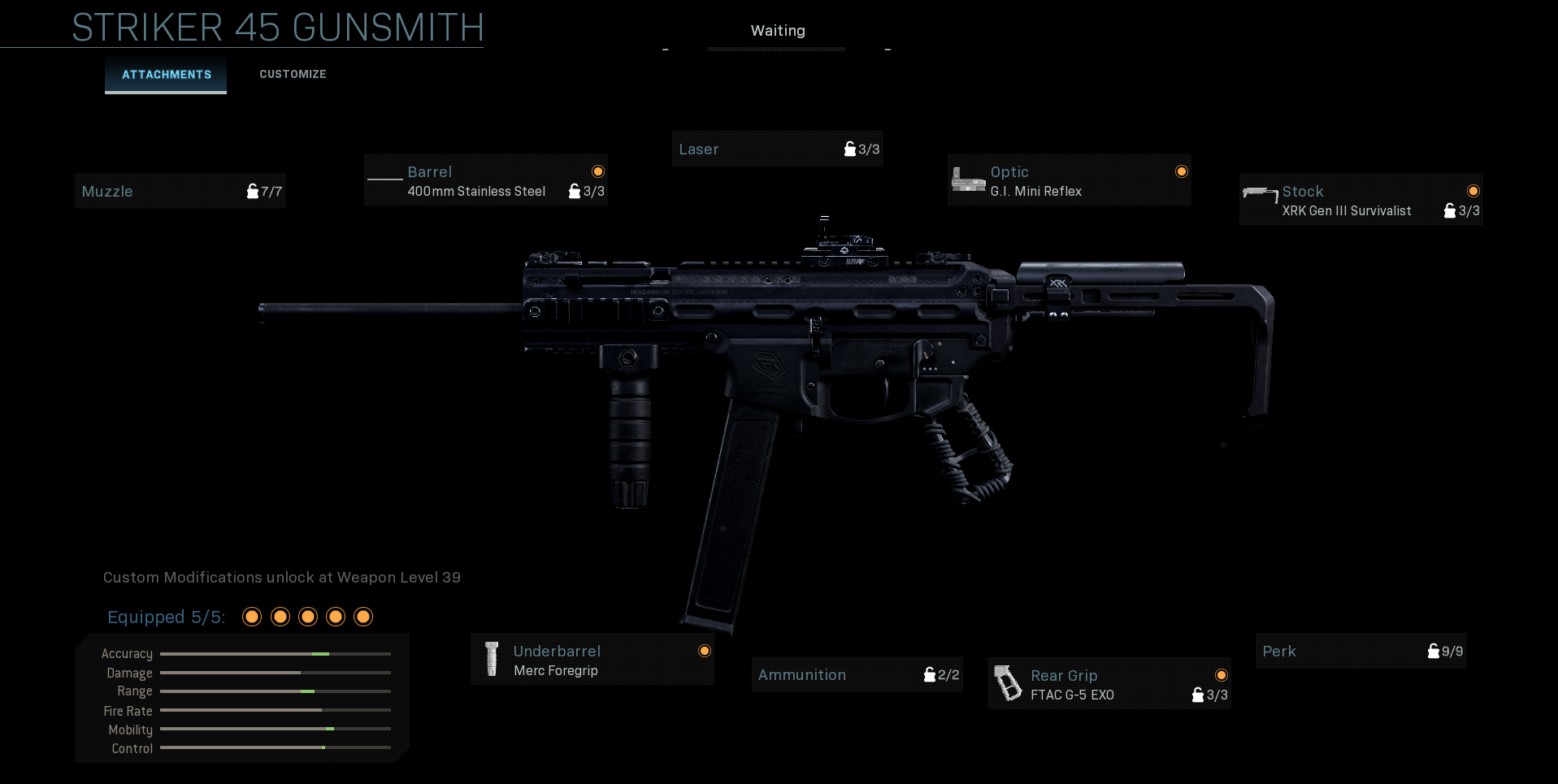 This class serves several purposes. One, it features a Striker 45 build where all of its stats are balanced and near each other. This attachment combination can be used in pretty much any loadout that you want.

As for the rest of the class, it’s been tailored for objective-game modes, starting with the JOKR Launcher secondary, which you can use to take down enemy streaks. That, of course, will earn you points, as will capturing and defending objectives, all going towards helping you earn streaks thanks to the Pointman perk.

Semtex and Smoke Grenade both are great for objective-based modes, and Trophy System makes you impervious to any explosives that the enemy team may try and chuck at you. 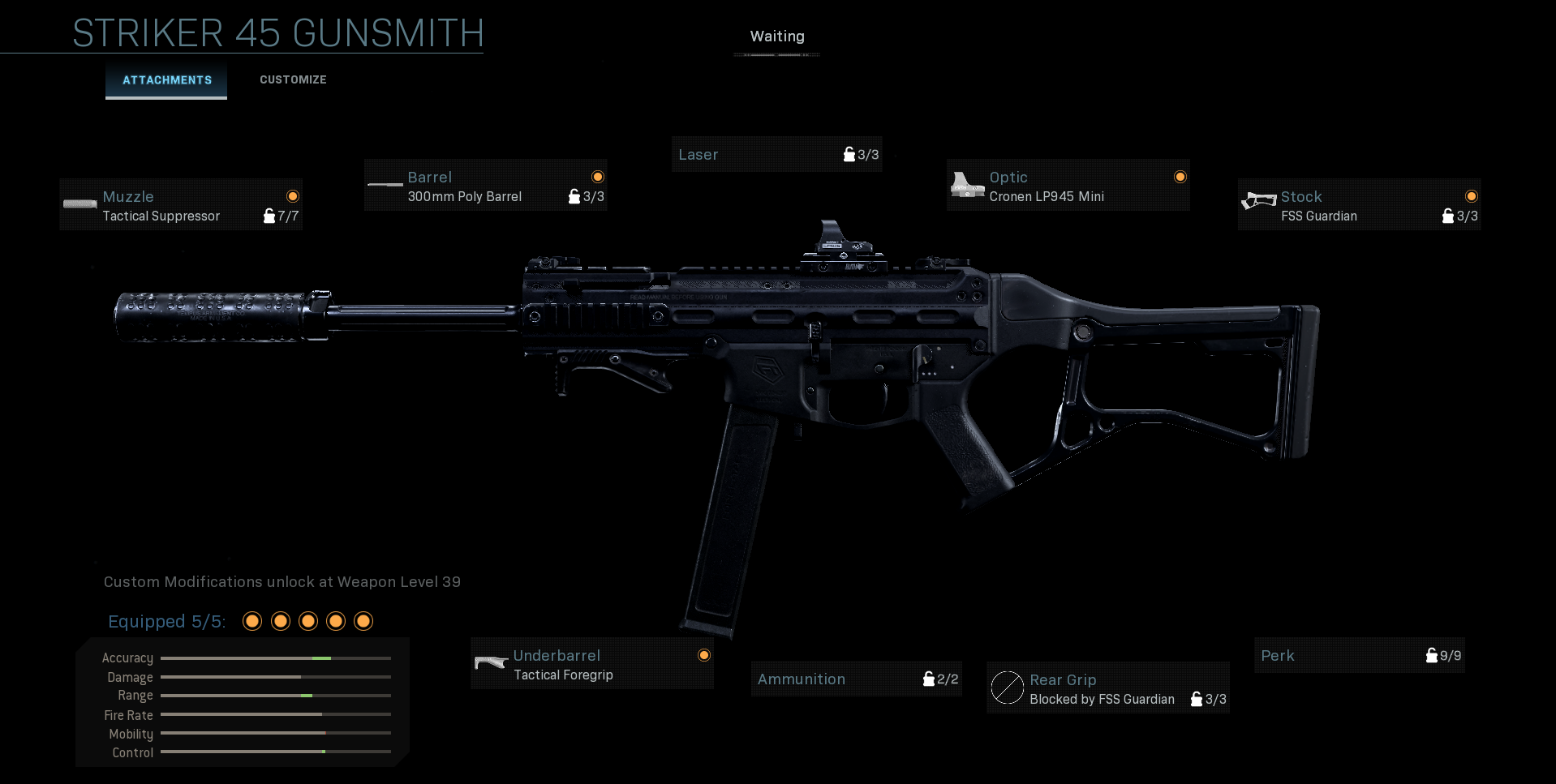 Back in Modern Warfare 2, when the UMP45 was at its most popular, a lot of players liked to use the powerful SMG in a very specific way. This class works to recreate that in the series’ 2019 game, producing a suppressed Striker 45 that can be viable it pretty much all ranges.

The Tactical Suppressor keeps you nicely hidden without affecting mobility, while the rest of the attachments work together nicely to make the weapon accurate enough to be used at medium and even long ranges while agile enough to be used in closer quarters.

Cold-Blooded and Ghost are both excellent for stealthy type classes like this one, and Tune Up ensures you keep getting Dead Silence as many times as possible during each match. You can also go with Spotter, if you want to avoid any and all enemy traps.

Overkill is one of the strongest perks in Modern Warfare, more so than in previous Call of Duty titles, because this game doesn’t have a pick-10 class system. This means that you can essentially run two primary weapons in your loadout that both are fully-equipped with the maximum five attachments.

That then begs the question – which guns are best to pair up with the Striker 45 in an Overkill setup? Well, it all depends on which build of the SMG you’re going with. If you use the run-and-gun version, then it’s better to pair it with a sniper rifle, marksman rifle, or a longe-range build of an assault rifle.

On the flip side, if you want to use the longer-range version of the Striker 45, then your best bet is to combine it with a shotgun or a very agile SMG that has a high fire rate, like the P90 or MP7. In either case, make sure to have Amped as your third perk, because that considerably speeds up how fast you swap between the guns.

There you have it – the best classes and attachment combos to use for the new Striker 45 SMG. Now, load back into the game, try out these loadouts, and let us know what you think!

Also, make sure to check out all of the other weapon guides we’ve done for Modern Warfare, such as the best classes for M4, AK-47, RAM-7, MP5, MP7, P90, and Holger-26 and bonus tutorials like how to build 15 “secret” weapons in Gunsmith.