What does a Hop-Up do in Apex Legends? Complete weapons guide - Dexerto
Apex Legends

What does a Hop-Up do in Apex Legends? Complete weapons guide

Apex Legends’ armory is incredibly diverse with each weapon bringing its own advantages to a firefight, but those guns can be way more effective with the use of a simple Hop-Up attachment.

Even though players dropping into King’s Canyon experiment with any gun they find during the mad scramble at the start of a match, they might not know how exactly the elusive weapon attachments will enhance their loadouts.

While there’s been tons of weapons guide that give players a sense of the damage charts after the Season 2 update, some stats can wildly improve by clipping the different Hop-Ups available in the game.

Players can get much more deadly with the right combinations in their loadouts.

In a Reddit post, user ‘iGameYT’ put out a gigantic list of comprehensive stats that break down how every weapon performs, then added a line with their corresponding attachment whether it’s the Turbocharger, Selectfire, Disruptor, Hammerpoint or Skullpiercer.

Along with the stats, the user uploaded a video that, for example, demonstrates how the Turbocharger beefs up the Havoc and Devotion respectively, as they can both get amplified using that Hop-Up.

“What the Turbocharger does for these two guns is either directly diminish or reduce the spin up times for each of these guns,” iGame said. “The Havoc has a half-second delay before it fires its first bullet, same for the Devotion LMG that takes a while to wind up for its full rate-of-fire.”

Even though the heavy rifles have a huge draw to them, the Turbocharger makes them vastly superior than their non-Hop-Up counterparts as the attachment “directly impacts their rate-of-fire of each weapon, thus improving its overall damage output.” 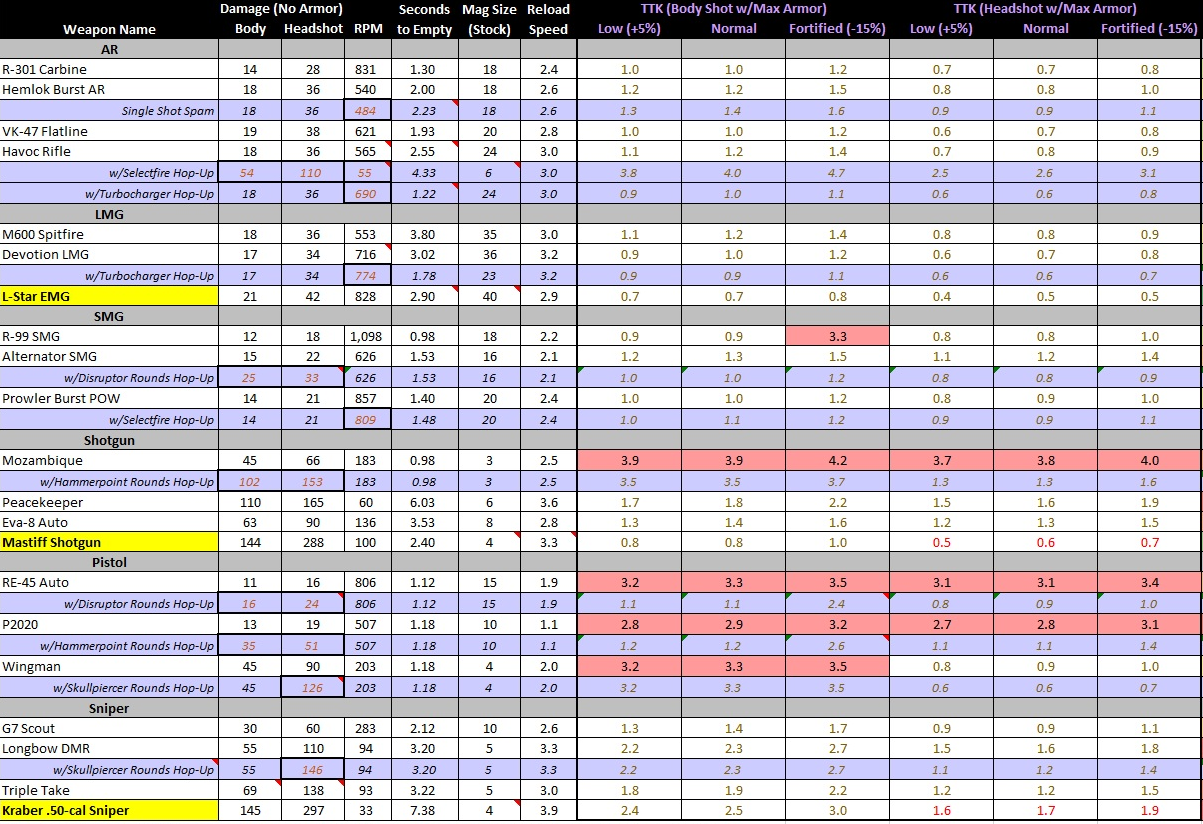 Only a fraction of the complete guide of the effects and stats for weapons in Apex Legends.
https://i.redd.it/g8iu80q1v1f31.jpg

While casual players can get overwhelmed with all the stats and numbers flying around, a few key numbers to look at in iGameYT’s chart are the TTK (time to kill) and obviously the damage ticks.

With those stats alone, players can equip themselves with the knowledge for the best weapons to throw a Hop-Up attachment when planning out their loadout for the mid-to-late game in a given Apex Legends match.

The explainer is a valuable source for players looking to find the best combination of loot, which could definitely be the decider to winning out in a game of Apex Legends.