Apex Legends remains one of the most popular games in the world but the game is slowly seeing its popularity on Fortnite.

Over 50 million players have tried their hand at becoming an Apex Champion since Respawn Entertainment released their free-to-play battle royale on February 4.

Popularity with players does translate into huge viewing figures on Twitch, as fans try to replicate what they’ve watched in their own games. However, the game’s popularity on the livestreaming platform has already begun to take a hit – falling behind its immediate rivals.

Apex Legends players are beginning to turn out of the game on Twitch.

According to numbers corroborated by The Esports Observer, the free-to-play battle royale has seen a drastic drop off in viewership since it’s release week. Viewers watched 31.7M hours watched in the game’s first week, but that number dropped below 10M hours in the week of March 18.

The game blew away the majority of titles during the early going, having seven million more viewers than Fortnite at one point. However, in recent weeks, the game has slowly slipped behind Epic Games’ mega-popular title – with Fortnite almost doubling the number of concurrent viewers regularly since the end of February.

Despite the decline, the concurrent viewing numbers for Apex have remained somewhat consistent at around 130 thousand viewers – with those number seeing a bump to around 150 thousand since the launch of Apex Legends Season one on March 19.  Fortnite, however, regularly hits over 200 thousand. 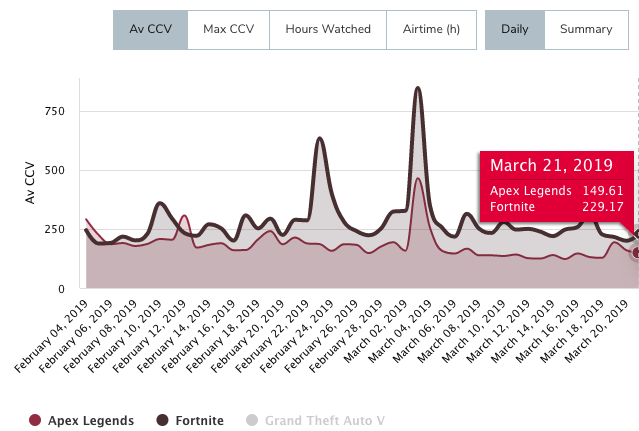 The number of concurrent viewers has remained mainly consistent for Apex.
[ad name=”article3″]

While Respawn’s title remains popular with players, the decline in numbers does have to do with some of Twitch’s names moving away from the game after a steady diet of playing Apex since it’s release.

CS:GO and chatting to his viewers on his streams.

Twitch megastar Fortnite after stating he was moving away from Apex Legends for the time being to focus on the Fortnite World Cup event.