The Ping system in Apex Legends is one of the most fundamentally important aspects of the game, and some players have come up with ways on how it can be further improved.

How does the Ping system work in Apex Legends?

The release of Apex Legends introduced mechanics into the world of battle royale that had never been seen before in the genre, one of which was the Ping system.

The system allows players to mark, or “ping,” weapons, items, directions, locations, enemies, and pretty much anything else on the map, allowing teammates to coordinate a lot better among themselves.

This system is especially useful for players who have queued with less than a full squad to communicate with others they may have been randomly matched with.

The Ping Wheel is a key part of the feature that gives players a variety of different pinging options.
[ad name=”article2″]

Ideas for improvements to the Ping system

Over the past few days, Apex Legends players have posted some ideas and concepts for how the Ping system could be further expanded and improved.

There have been two very popular proposals on Reddit, the first of which suggests that options be added to the Ping wheel that would instruct teammates to hold their fire or retreat.

This would allow teammates who are unable to communicate via voice chat to advise each other to avoid shooting at enemies and giving the team’s position, or perhaps even retreating from a gunfight so that they can heal up and regroup.

Dear Respawn, Can we have a “Hold your fire” ping? from r/apexlegends

The next popular concept was the addition of feature that would allow players to Ping the status of their Legend’s Ultimate Ability for teammates to see.

Many of the Ultimate Abilities compliment each other well, and teammates often rely on each others’ Ult’s to help out the entire team. This way, players would be able to share the progress of how much their Ult has charged, or even to let teammates know that the ability is fully charged up and ready to go. 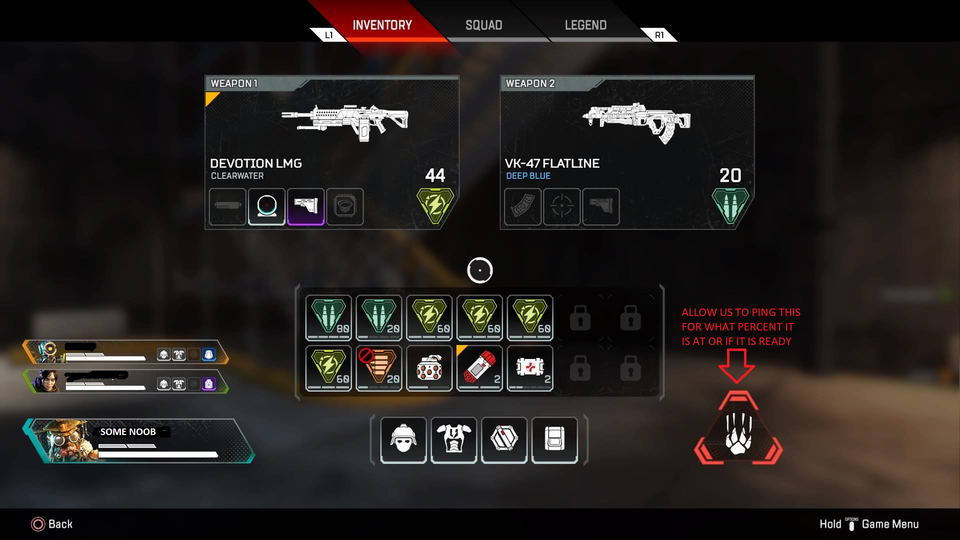 This concept would allow players to share how much is left for their Ultimate Ability to charge, or if it’s ready to go.

Considering the fact that both of these ideas got a good amount of upvotes on Reddit, it would probably be safe to assume that not many players would mind if they were added to the game as new features.

However, the big question is whether Respawn Entertainment is willing to make changes to their Ping system, although considering that the game is still so young, there’s definitely a possibility.