Apex Legends dev Daniel Klein has confirmed that Respawn are working on a feature that will allow players to see how much damage an Evo Shield needs to level up when looting it from an enemy.

As Apex Legends Season 6 got underway, Respawn made a pretty major change in regards to shields. When you drop into a game, you start without a shield but only require 50 damage to level up to a common shield.

Players can still loot different shields from loot bins and the usual floor loot shields, but it can be quite annoying when you take down an enemy and look to steal their better-leveled shield, as there is no indication how close to the next level it is.

It’s a difficult decision, do you stick with your own shield and carry on, or switch over and try your luck with the enemies shield – risking a reset on the progress on our own shield in case you want to switch back.

Evo Shields are now the norm in Apex Legends games.

Well, after one fan put forward the idea of having an indicator on the looting menu of how far along an enemy shield is, Apex Legends developer Daniel Klein chimed in with the news that most players are hoping for.

“Yup! We’re working on something like this,” the dev commented, though he wasn’t able to offer any additional details past that. “No timeline, but hoping to ship it soon.” 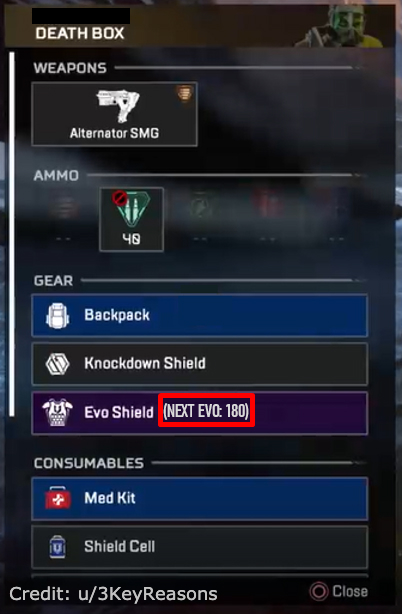 With the Aftermarket Collection Event scheduled to get underway on September 15/16, according to rumors, it could be rolled out then, but, as Klein says, there is no timeline just yet.

Another thing that could be included in the Aftermatch Collection Event patch is a fix for knockdown shields after they’ve been rendered “useless” in Season 6.

The devs noted that a fix for the problem “in progress” via their public Trello Board, so by the time Aftermatch rolls out, Apex Legends could be spick and span with a few, must-needed changes.