Apex Legends continues to be haunted by a severe glitch that is affecting players who get knocked down by enemies during combat.

While the launch of the highly anticipated Season 2 of Apex Legends introduced a lot of new content and major changes to the popular battle royale, it did not do a great job at fixing some of the game’s biggest issues.

There continue to exist glitches, bugs, and exploits, some of which have the potential of really affecting gameplay in a negative way.

One such glitch is allowing players who get knocked down by enemies to continue to fire their weapon, which is obviously not what’s supposed to happen when a player gets shot down.

The video below, posted by Reddit user ‘Slive111,’ shows this glitch in full effect, as the player is able to fire his weapon and inflict damage on an enemy despite bleeding out on the floor.

What’s really astonishing about this glitch, aside from that fact that it’s clearly game-breaking, is that it’s actually been around for nearly as long as the game has.

The issue was first discovered by players mid-February, shortly after the game’s release, followed several weeks later by popular Twitch streamer Timthetatman coming across the glitch himself, and losing his mind in the process.

What’s more, the developers at Respawn Entertainment haven’t ever really discussed this issue, so its cause remains unclear.

One Reddit user, however, commented on the post above that that cause has to do with “the timing of an animation lining up perfectly with you getting downed,” although that still doesn’t explain why it hasn’t been fixed yet. 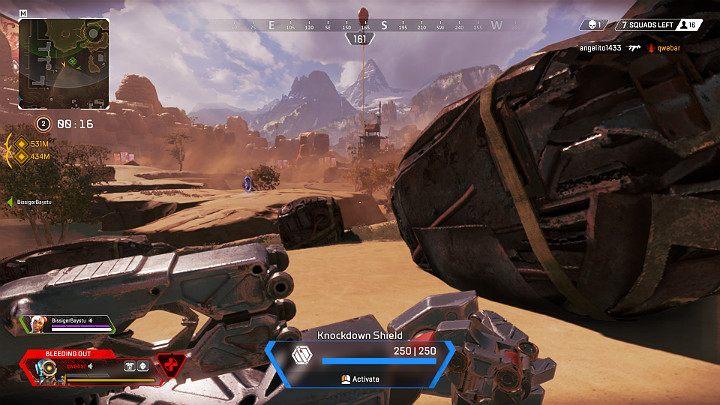 Players who get knocked in Apex Legends are only ever supposed to be able to use Knockdown Shields, and nothing else.

After months of hype, the second season of Apex Legends finally launched on July 2, adding the brand new Legend Wattson, introducing several major changes to the Kings Canyon map, implementing buffs and nerfs to a variety of weapons, and more.

Season 2 is now available for free on the PlayStation 4, Xbox One, and PC.