For a time, Apex Legends looked like it’d be the next hot commodity on Twitch, but it has since dropped significantly down the totem pole. Does it really matter though?

A lot to do with Apex Legends’ quick start came from big-name Twitch streamers playing the game on launch day. The title received no promotion from EA or Respawn themselves prior to release, and instead was first experienced by a group of streamers and content creators just days before its release.

It was able to take advantage of a time when Fortnite Battle Royale’s popularity was waning and Apex represented something new and refreshing for players to experience.

When Apex Legends came out it was buoyed by a number of big streamers playing the game like shroud, Dr Disrespect, Ninja and many others but they have largely moved on to other games which has led to the decline of Apex’s Twitch dominance.

While Apex Legends was able to bring dizzy to prominence, it hasn’t really done it with other streamers. Fortnite caused Ninja and Myth, just two of many examples, to explode in popularity, something Apex was unable to do.

In data gathered by The Esports Observer, we see Fortnite’s average concurrent viewers are consistently above Apex – give or take a couple of days where Apex held a Twitch Rivals tournament or sponsored players to play. 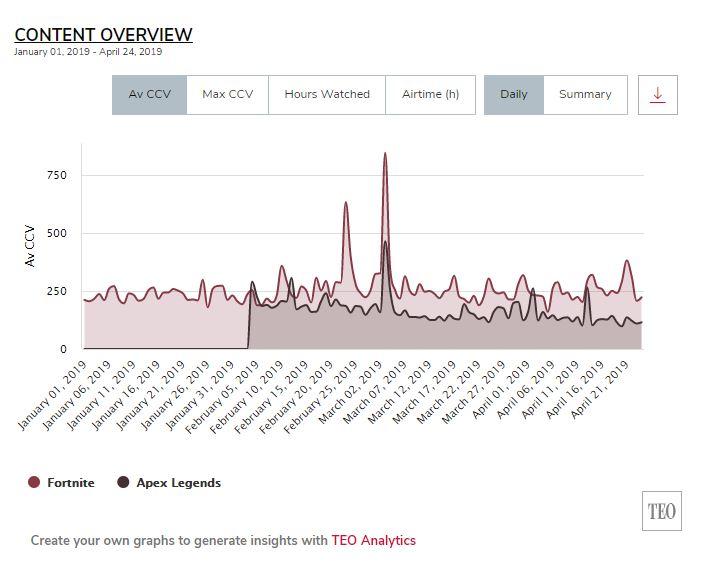 What does this mean for Apex Legends?

While Apex Legends is waning on Twitch that doesn’t mean the game’s player base is hurting by any means.

With 50 million unique players in its first month, the numbers aren’t bad at all when it comes to the player base, so the Twitch viewership doesn’t tell the whole story. Respawn mentioned the game’s player base is still growing rapidly as recently as April 25 with a blog post about the future of the game – although didn’t give a specific figure.

For all those out there writing the eulogy for Apex Legends because of the declining Twitch popularity, you might want to hold off for now.