Apex Legends players have been noticing that the game’s Supply Bins aren’t offering useful loot for them to equip, leading to some frustrating moments throughout a match.

The chaotic nature of Apex Legends’ early game has players scrambling from building to building to scavenge any loot piles or Supply Bins they come across. But many games are quickly ended when opening a Supply Bin to find a row of level 1 Body Shields, and nothing else.

While the very nature of battle royales work to sift out players at every turn, it’s hard to be competitive in the game when the RNG leaves you weapon-less for the better portions of the early game.

A few examples from the Apex Legends subreddit community show that there is room for major improvements as it pertains to the loot that could be dropped in Supply Bins.

“Season 3 loot isn’t that bad, you’re just not good at the game,” user ‘callgage’ joked as they featured a Supply Bin lined with Common Body Armor.

“Season 3 loot isn’t that bad, you’re just not good at the game.” | Season 3 loot: from r/apexlegends

While armor is necessary to keep players alive, if not for a moment, battle royales typically require something to fight back with in order to make it into the late-game.

Though at least there was enough of the body shields to supply a full Apex Legends squad, unlike ‘zuzu_1290’s Supply Bin haul which only had enough shields fit for a solo player.

Op supply bin to be honest from r/apexlegends

Even though players should train themselves to loot up quick – which entails quickly scanning a Supply Bin’s contents and bolting at the moment they realize there’s nothing useful in there – it’s not like there isn’t anything that can be done.

A method to the Supply Bin’s madness

In the past, players have figured out Lifeline’s Care Package in terms of what kind of loot is likely to spawn on the different panels. Perhaps a similar approach could be taken with Supply Bins.

For example, the leftmost spawns of a Bin could hold weapons/ammo/attachments, while the center carries attachments/ammo/grenades, and the rightmost mixes in armors like helmets and body shields. 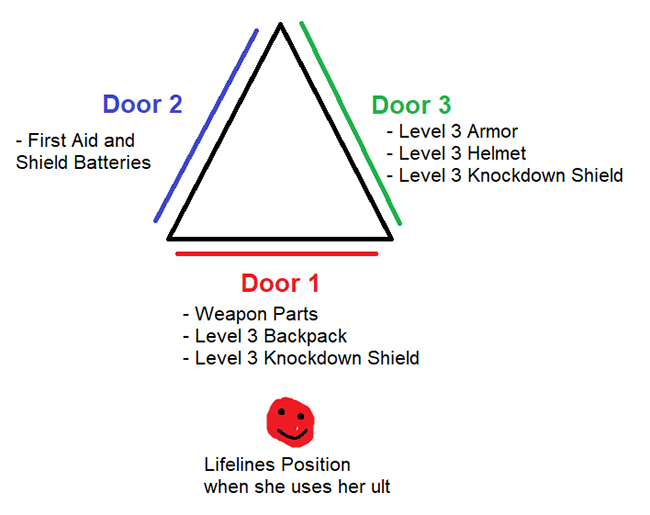 Lifeline’s Ult has a method to its madness, maybe a similar approach could be adopted by regular Supply Bins.

RNG would still have a major impact on the contents inside of the Supply Bins, but there could be a layer of security for players by knowing at least what/where the type of loot could spawn.

The purpose of a battle royale’s loot is to be randomized as it has been since Apex Legends’ release, but a bit of order in their chaos could provide a more rewarding start in the early part of the game.