Playerunknown’s Battlegrounds is getting highly anticipated features in its brand new Update 30, including new Radio Messages, additions to the game’s arsenal, exploding gas tanks and so much more.

The Xbox #8 and PS4 #5 updates for the game gave players a whole new reason to grind games by finally introducing weapon masteries to PUBG but this time its PC community are getting tons of exciting features to explore.

The PUBG Corporation released a huge set of patch notes on July 1 outlining everything coming to their battle royale in the near future. While players have troves of new additions to sift through, a favorite among them will undoubtedly be gas tanks’ new use.

The main highlight of the July 1 update is the improved gas can that turns it into a strategic weapon, allowing players the option to shoot the cans to do damage to anyone who happens to be standing next to  them.

Be careful, though, as cans will do damage to you and your teammates, too, meaning you should execute your explosive plans by standing as far away as possible.

Along with the improved gas cans, they are now individually displayed in the inventory, making it easier to deal with when you’re trying to use one in the heat of battle.

Other new toys to play with

The gas can wasn’t the only new addition, however, as the Deagle was added along with the BRDM-2 tank.

The Deagle will head straight to the top of the pistol list as the strongest damaging pistol in the game, dealing 62 damage per shot.

Meanwhile, the BRDM-2 tank replaces the armored UAZ and can be called down to the map as a special Care Package using the Flare Gun. While you can’t shoot while on board, it will hold a full squad of four players and can operate on land and in the water.

Get a “ledge” up on the competition

Following in the steps of other battle royale titles, PUBG has now added the ability to grab onto ledges around the map, giving a new layer of mobility to the game.

Players can now grab a hold of “roofs, fences, and obstacles up to 2.5 meters high, and jump from building to building or container to container.”

The devs were sure to let players know that there would be further updates to the feature down the line and are looking for feedback in the coming weeks.

There’s plenty more in store for this massive update, so make sure to get the full break down in the patch notes below.

Patch update #30 is here and it is chock-a-block full of new features, vehicles, and a much demanded addition to our handgun selection.

We heard your calls for more items to use your BP on, so in addition to making even more BP purchasable items in the future, we are creating more opportunities for you to earn the in-game currency with Survival Supply missions until the next Survivor Pass.

As for what’s landing in this update, awaiting players on the Battlegrounds are the .45 caliber hand cannon that is the Deagle, amphibious assault vehicle the BRDM-2 and an explosive new way to use an old favorite with explodable Gas Cans!

Gameplay is getting a big new feature with the addition of ledge grab, giving players the ability to navigate the Battlegrounds in a whole new way and forcing them to think strategically in entirely new dimensions, namely vertical.

Coordinating with global teammates is also getting a big step forward with the introduction of radio messages, short burst text communications for better identifying items, clarifying objectives and cooperating with teammates.

You’ll be able to find more details in the patch notes below on updates to Weapon Mastery, including XP bonus events, default pro-settings for custom matches, brightness options for each map and a whole lot more.

“Players feeling froggy for a fight will now have the chance to call down an armor plated amphibious assault BRDM-2 by using the Flare Gun!” 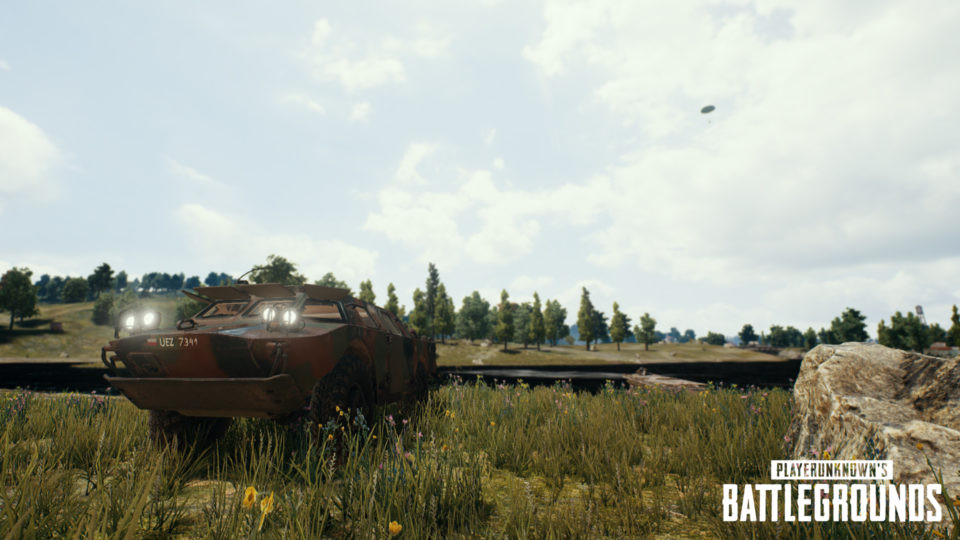 “Bang Bang Pow? That’s the sound of two shots from a Deagle breaking a level 3 helmet.” 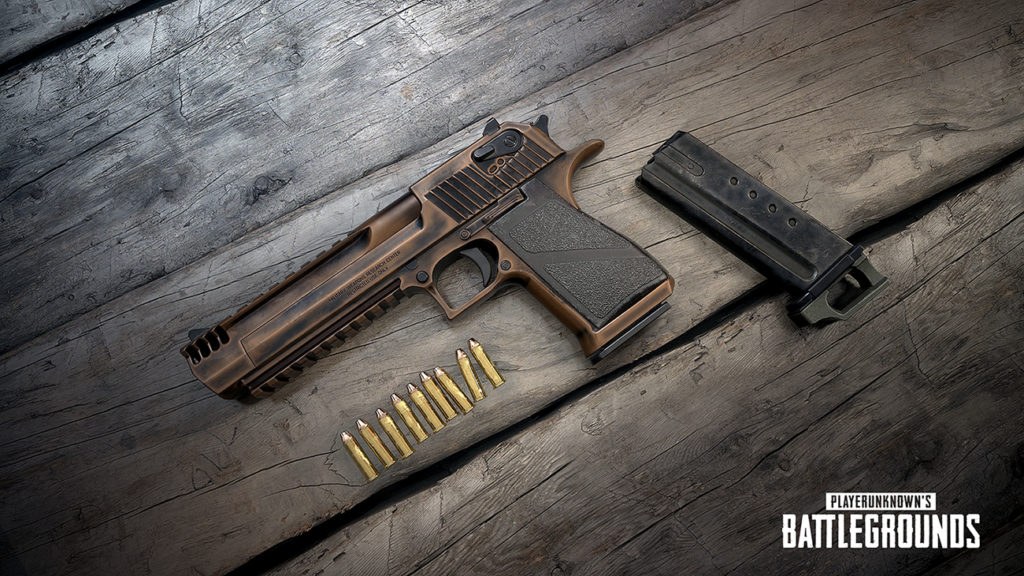 “Find new ways to fight, jump, grab, get up, and go with our new Ledge Grab feature!” 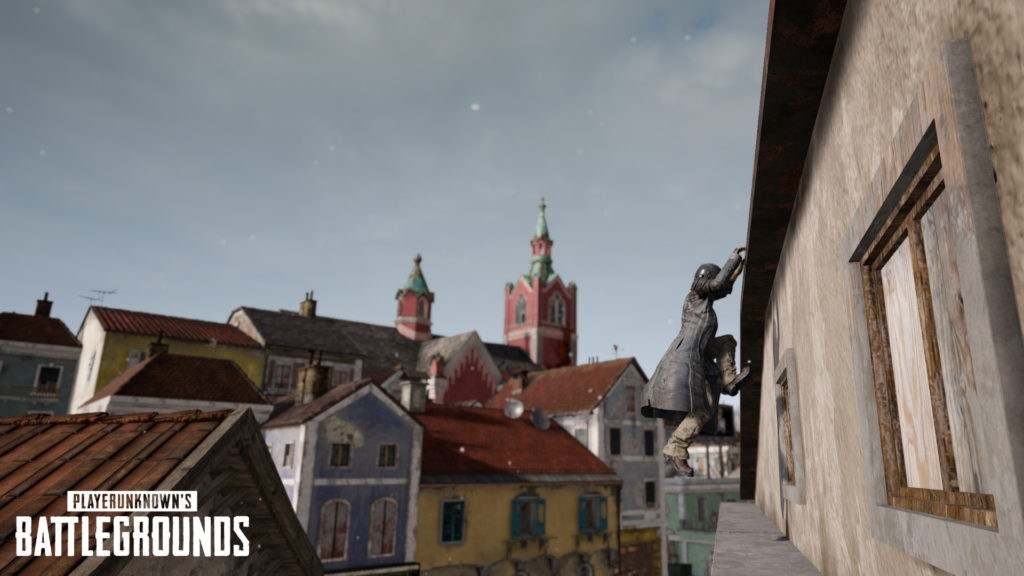 A message from the Dev. team on ledge grab

This is the first iteration of ledge grab, you cannot yet hang on the railings or slide down railings. However, ledge grab will be updated twice in total including this update, the dev team will keep working to enable those features just mentioned from the other update in the future.

We anticipate a similar adoption period for ledge grab as we had with the initial introduction of vaulting. We will work to isolate any improvements or modifications that need to be made during the early stages of the feature’s launch.

Please try out the new ledge grab and kindly give us your feedback so that we can further improve and polish the feature, which is the utmost priority to the Dev. team.

We will continue to make our best efforts to quickly ensure the feature is as stable and useful as possible. We very much appreciate your interest and feedback.

“We like the cans. The cans that go boom!” 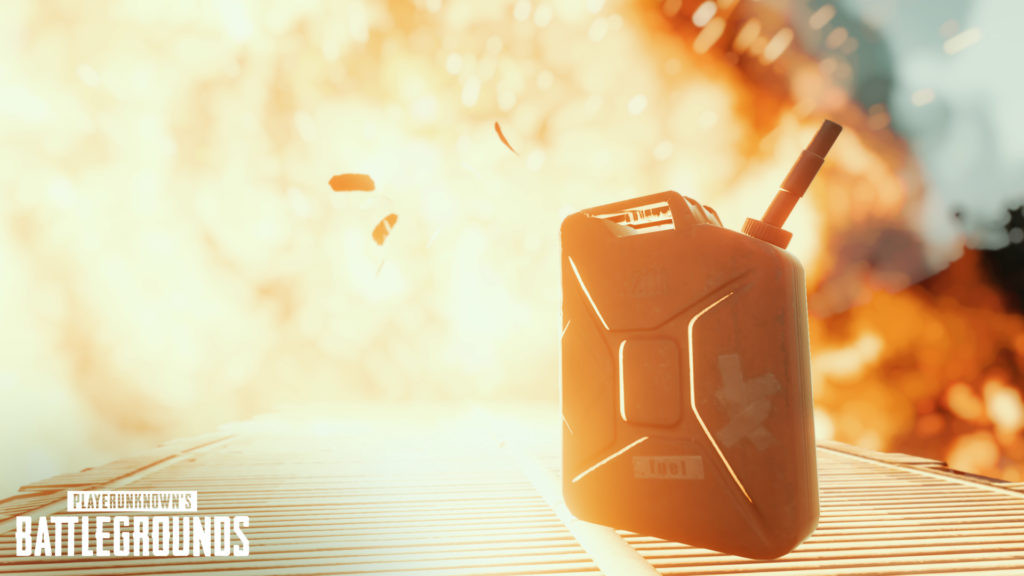 “You can’t talk over a chicken dinner if you don’t communicate in a match. Radio Messages will keep you coordinated with every teammate, no matter the region or mic situation. “ 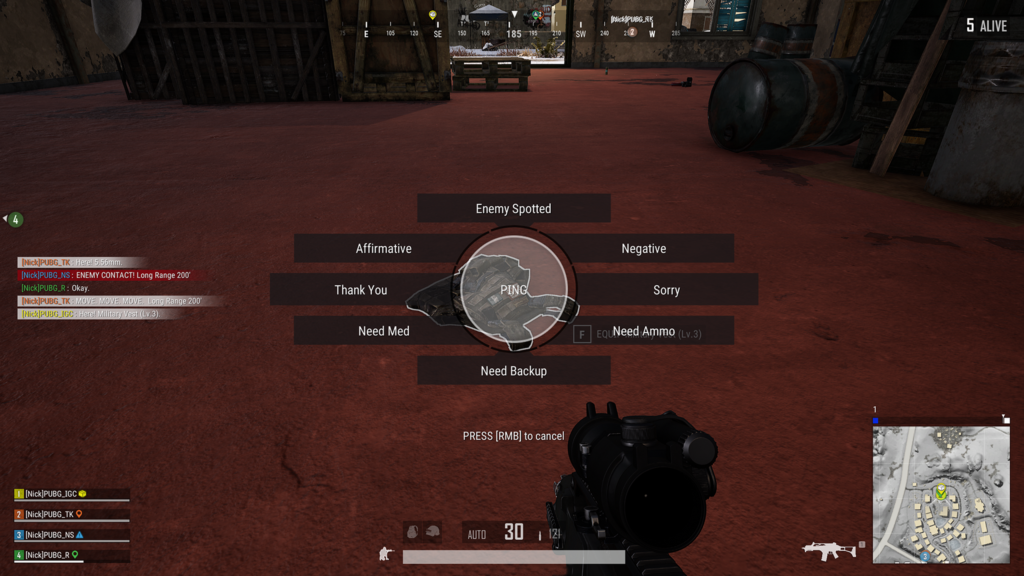 Playing with players from different regions in random Duo or Squad matches or players with no access to voice chat have made it difficult to establish team-based strategy through close communication between team members. To help solve this problem, we are introducing text-based Radio Messages that will help you communicate with your team more quickly and easily for successful strategic gameplay. 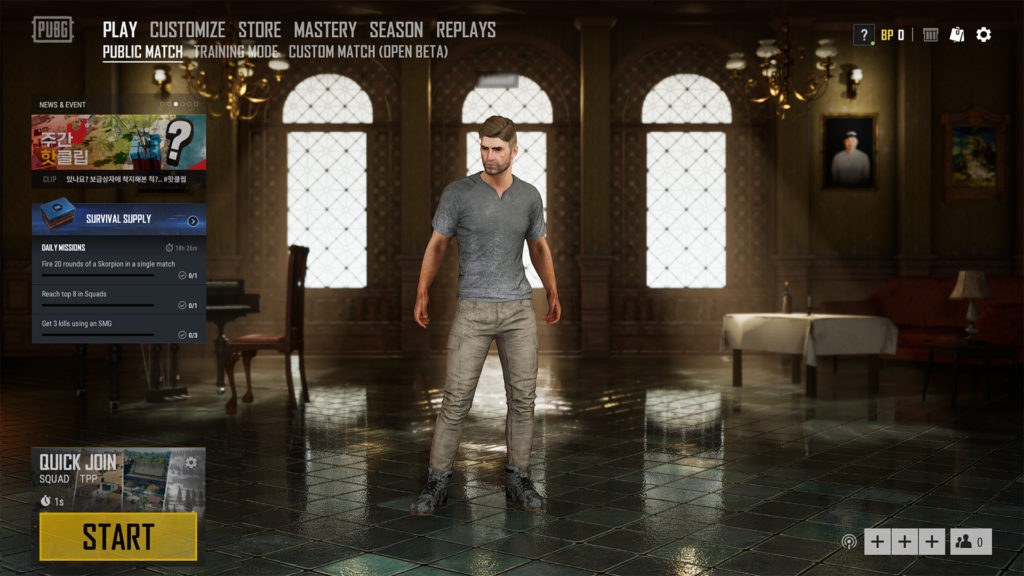 We’ve got new BP items for both looking good and keeping you statistically in the know on specific weapons, so to help you earn even more BP to pick them up we have added a limited time “Survival Supply System” before the next Survivor Pass. The system will provide daily and weekly missions to accomplish and provide BP as a reward. Don’t forget to scope out the new items you can buy with the BP you earned in the store!

The Survival Supply System will run from after June 26th, 2019 up until live server maintenance on July 24th, 2019. 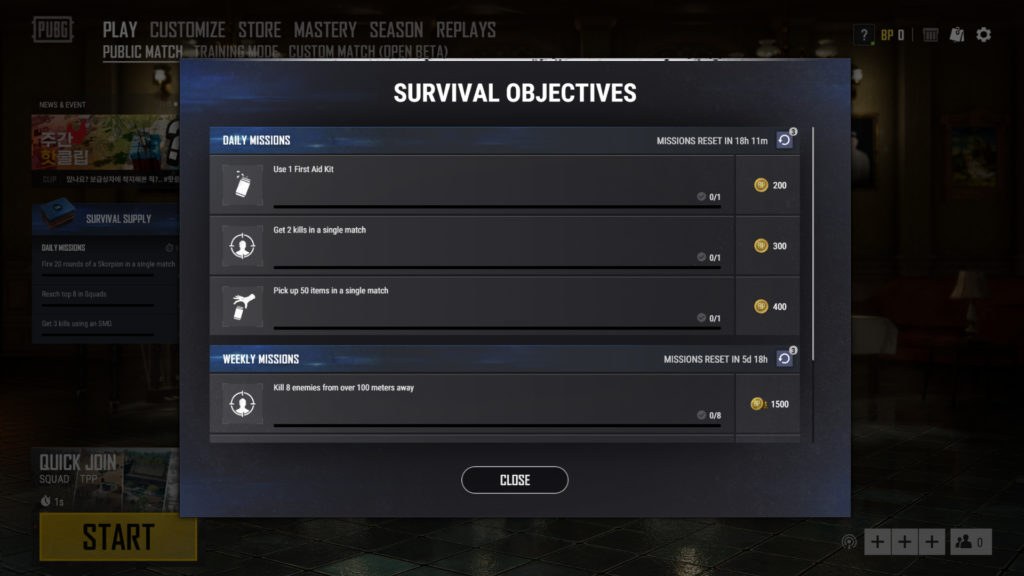 Introducing new skins you can find once this patch hits the live server! This includes new skins which can you purchase directly with BP. Play PUBG, earn BP, get skins! 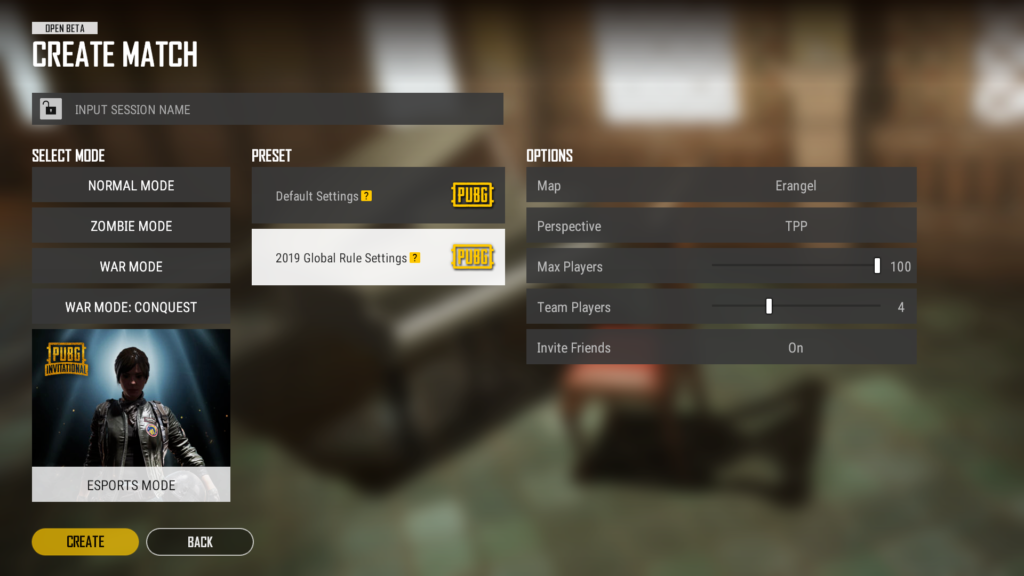 Special billboards and graffiti have been added in celebration of the upcoming GLL Grand Slam and MET Asia Series, part of the PUBG Global Esports “PUBG Classic” series!