Among the many Pokemon Sword and Shield details that were shared at Nintendo’s June 5 presentation was the reveal of seven new Pokemon.

Until June 5 we only know of three Pokemon that would feature in the 2019 Pokemon game: Grookey, Scorbunny and Sobble. These of course are the starter Pokemon of Sword and Shield.

Grookey is a chimp-like Pokemon who uses a stick as a weapon, Scorbunny, a rabbit who leaves a burn trail wherever it moves and Sobble, an unassuming and shy water lizard. These have been known about ever since Pokemon Sword and Shield was initially announced.

Wooloo has might quite an impression on the Pokemon community…

The sheep Pokemon’s fluffy fur is treasured by weavers in a town within the Galar region. They use the fur to craft popular speciality goods.

Wooloo craves stability, suggesting it is probably passive by nature. The Pokemon Company describe Wooloo as disliking conflict and when they need to escape enemies they will simply roll away.

Sobble have previously been the darling of Pokemon Sword and Shield but fans have quickly replaced that soft-spot Pokemon with Wooloo.

Gossifleur moves with the wind…

Gossifleur can travel long distances by getting blown along by the wind. It doesn’t look too dissimilar from Jotho’s Bellossom.

Gossifleur’s evolution was revealed also – Eldegoss. Upon evolving its head turns into a huge ball of cotton which is used to protect itself in battle. The seeds attached to it are nutritious for both people and other Pokemon.

Eldegoss is currently the only evolved form to be revealed of the Gen 8 Pokemon.

You don’t want to get a bite from Drednaw…

The bite Pokemon is a dual water and rock type. Its teeth are sharp enough to bite through rock and iron – don’t worry though, Pokemon do live when encountering it in battle!

Much like Charizard from season 1 of the anime, Drednaw is particularly had to tame. It takes a highly skilled Pokemon trainer to command respect from it – many trainers release it back into the wild as a result.

The raven like Corviknight is said to make Pokemon that challenge it run away simply because of its glare and cry.

Despite being somewhat evil looking, it actually helps people of the Galar region by transporting them between cities. During your journey in Pokemon Sword and Shield, Corviknight can fly you back to cities which you have previously visited. 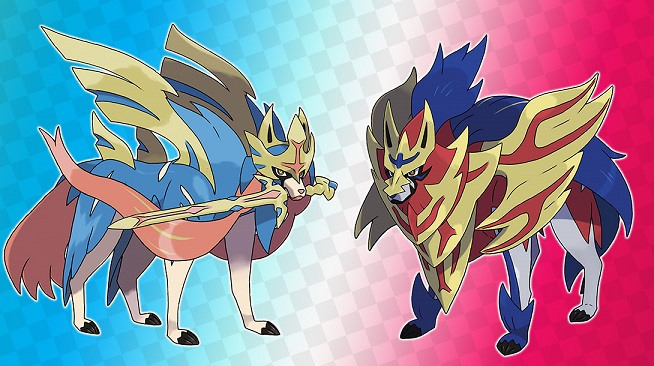 Zacian and Zamazenta are legendary within the Galar region…

The wolf like legends are remain unknown even to those who live in the Galar region. Zacian holds a sword in its mouth while Zamazenta’s body is comprised of a shield.

Both their movements are said to be so elegant that they can captivate and overwhelm any opponent. It also appears that Zacian will be more attack-based and Zamazenta strength will be its defense.