Patrick Mahomes and Aaron Donald made up the final batch of Madden 19 NFL Honors cards dropped into Madden Ultimate Team on February 8, and it certainly appears to be well worth the wait.

Unfortunately, Aaron Donald doesn’t quite live up to the same standards as his aforementioned NFL honor colleague. That’s in large part thanks to his position designation, which essentially forces the back-to-back Defensive Player of the Year into an uncomfortable position. 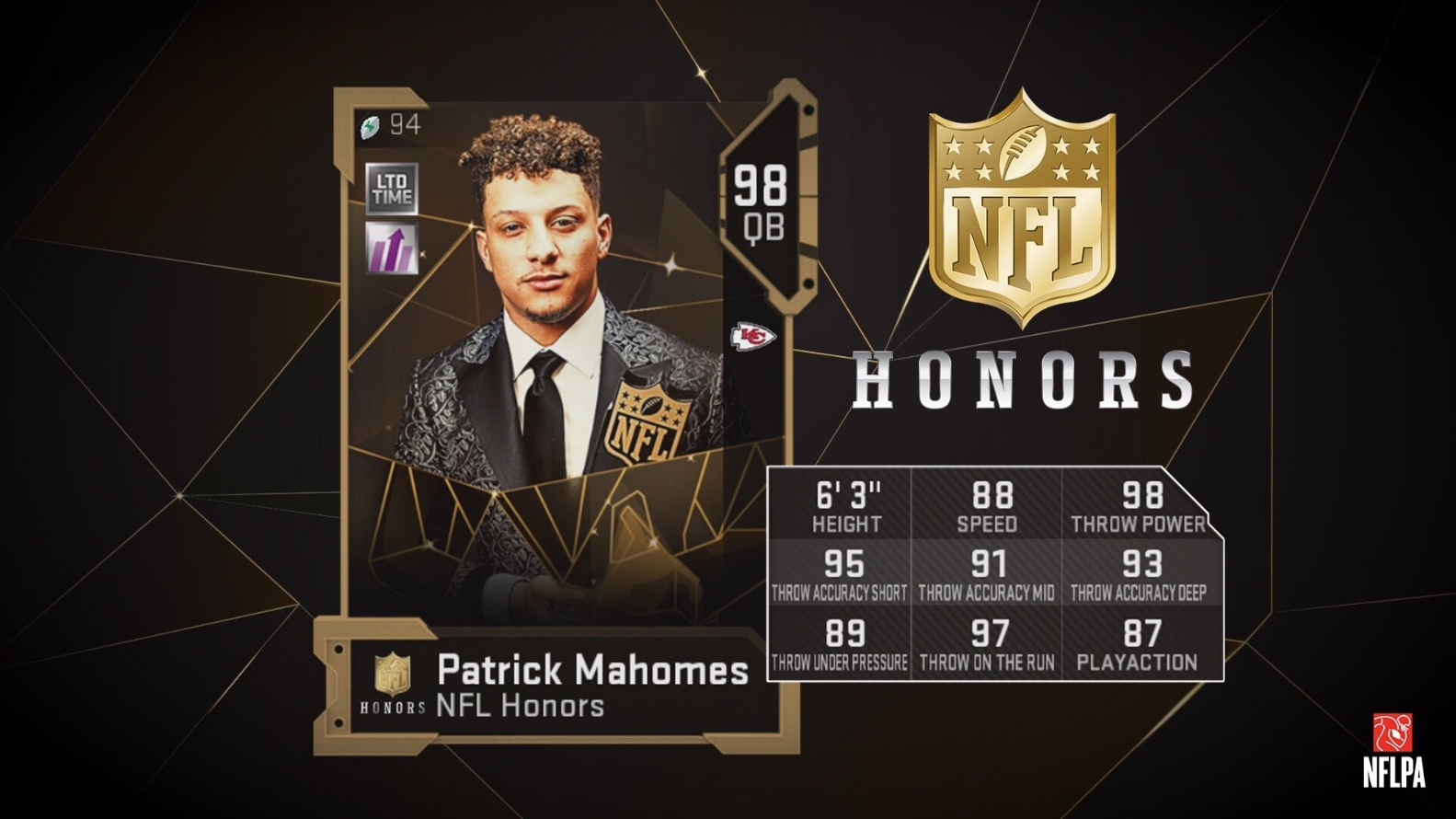 Patrick Mahomes might have changed the Madden Ultimate landscape for quite some time.

With a base 98 Throw Power, Mahomes shouldn’t be automatically slotted with “Go Deep”, which had been the customary chemistry option for quarterbacks all year thanks to the +3 THP boost. That could open the door for potential chemistry options such as “West Coast” or “Play Fake” to become more prevalent, essentially changing the way an entire MUT offense might be built.

And with 88 Speed, Mahomes becomes the second fastest 92 or higher overall quarterback, slotting in behind the aforementioned Vick while possessing significantly better throwing stats across the board.

Of all the limited time cards released this season, Mahomes actually feels “limited”, simply because he alters the entire dynamics of a users lineup. That’s absolutely a good thing, and hopefully something EA will notice for Madden 20.

The only downside is that Mahomes will unquestionably be the most expensive card for the foreseeable future, with early selling points listing the Chiefs’ MVP at upwards of two million coins. He’s likely well worth the price, and his Power-Up option could certainly make Mahomes “slightly” more affordable, but if you plan on picking up the second-year quarterback, you have to understand the cost of entry. 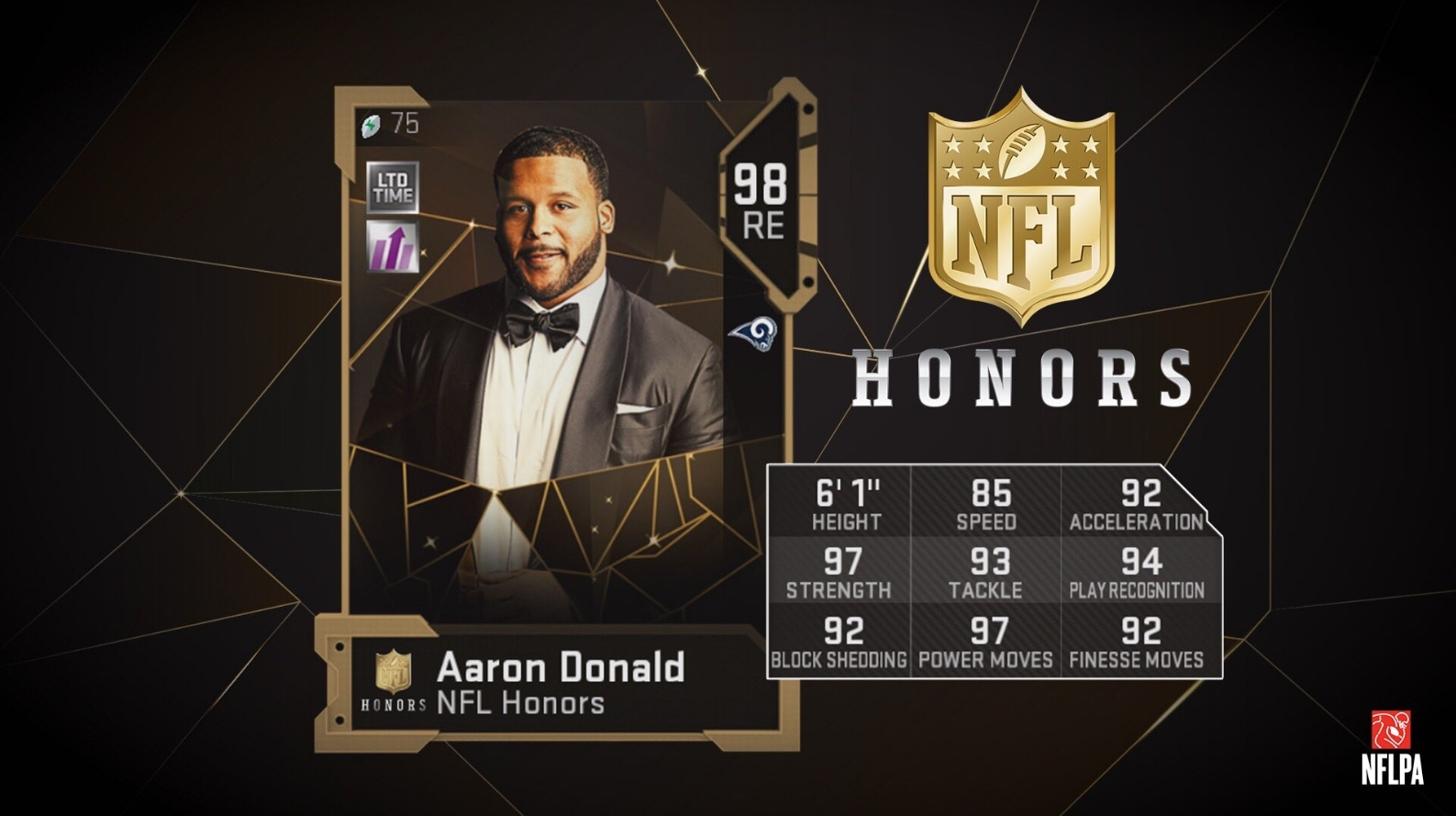 Aaron Donald is a bit of letdown compared to Mahomes.

Despite being an absolute terror in the NFL as an interior pass rushing presence, the decision to list Donald as a right end to begin the year essentially hamstrings him as a faster, 3-4 option for MUT users.

Effectively a defensive tackle in the Rams’ scheme, Madden’s inability to devalue speed, particularly with egregious quarterback rollouts becoming increasingly all the rage, has hampered Donald to the point where someone considering acquiring the star lineman must reconcile with his relative similar effectiveness compared to say, 97 overall Team of the Year Myles Garrett (86 Speed), or even 94 overall Ghosts of Christmas Future Bradley Chubb (84 Speed).

Those last two players, combined, are half than the current cost of Donald, and both could be chemmed up to the point where their strengths are only marginally worse than the Rams’ star player.

And unlike Mahomes, who likely would change the entire dichotomy of a given MUT offense, Donald could still be slapped with the usual defensive chemistry options and no one would bat an eye.

In addition to the new NFL Honors cards, Madden Ultimate Team players can enjoy double XP over the upcoming weekend.

There’s, unfortunately, no good way to fix this problem. If Donald was listed as a defensive tackle, he’d be significantly overvalued given the lack of impact the position currently has on MUT.

At least in his current position, Donald can be interchanged along the defensive line, similar to his real life option, without too much of an attributes penalty, and should be among one of the more well-rounded cards to be released for some time. But the price once again becomes the issue.

The RE might as well be the “whales” ultimate lineup flex, but for the vast majority of MUT users, it’s an incomparable ghost among a sea of cost-efficient options.