The next Madden 19 Ultimate Team MVPs have finally been revealed

The second wave of Madden 19 Ultimate Team MVPs is upon us, revealing 10 more teams who didn’t make the playoffs, and their respective 97 overall players for PS4, Xbox One or PC users.

Defensive players ruled the roost, with six of the 10 new cards slotting on that side of the ball. Of those, a whopping five 97 overall offensive or defensive lineman will join Madden Ultimate Team on March 15, but that doesn’t mean players will be without some star-studded cards.

Along with that, the first update to NFL Free Agency cards also took place Friday, providing updated team chemistries to handfuls of players who signed within the first days of the real-life NFL Free Agency. 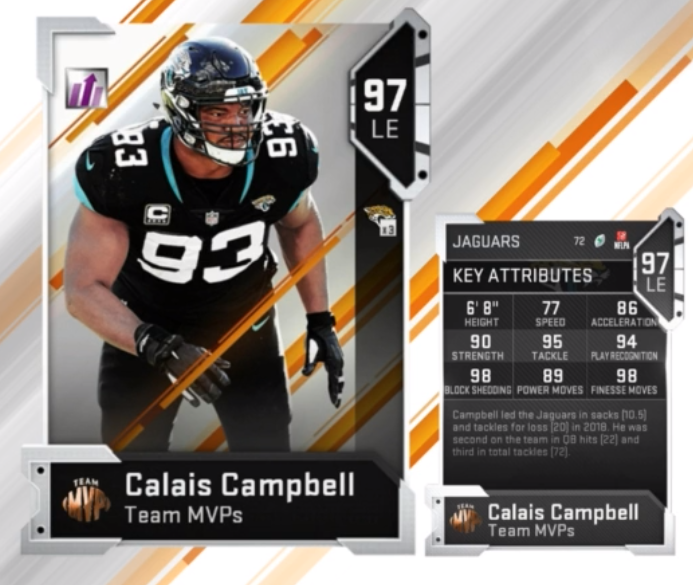 Campbell’s height makes him one of the more unique items in Madden Ultimate Team.

In fact, in the case of Jaguars Defensive Team MVP Calais Campbell, the 6-foot-8 defensive end might be one of the most well-rounded cards to date.

The height in particular is a positive for Campbell, particularly with the move towards quarterback red chemistry “Gunslinger” producing more potential for short throws at the line of scrimmage. 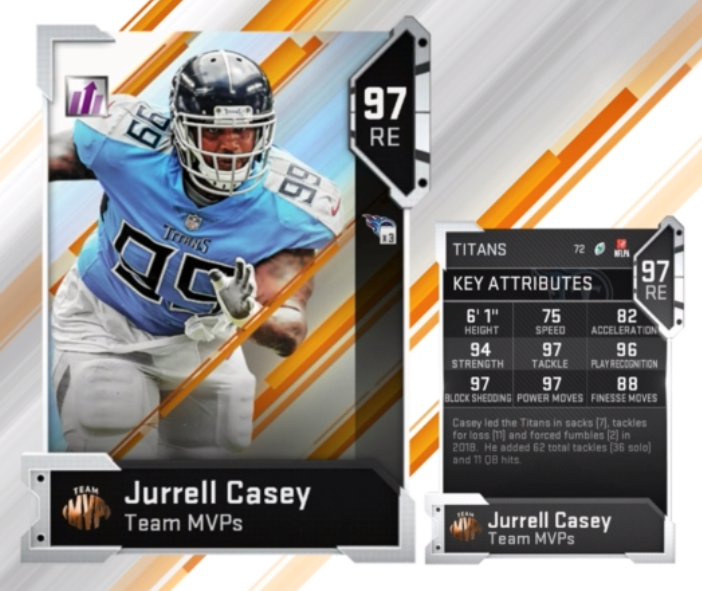 Casey joins a swath of defensive ends to receive upgrades in Madden 19.

Joining Campbell and Casey is Leonard Williams, and the trio of defensive ends immediately jumps to the top in pass rushing categories, with 95+ stats across the board including Blockshed, Power Moves and Finesse Moves. 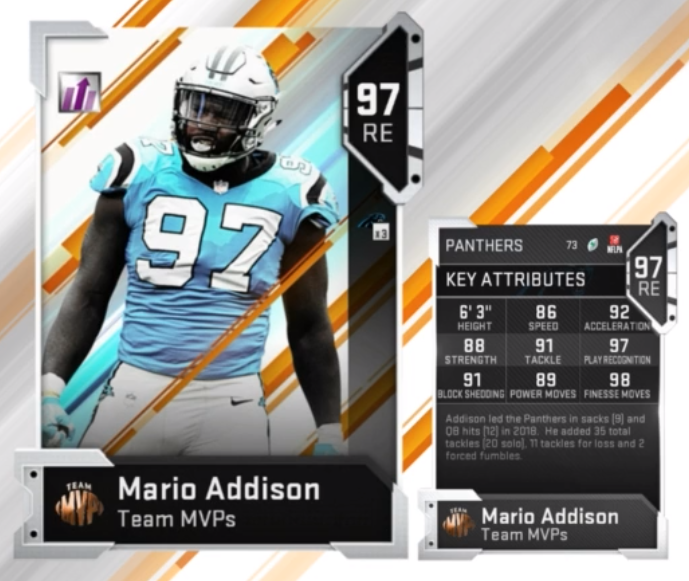 Addison is the fastest of the four defensive ends to be added, but isn’t as well-rounded.

Mario Addison was the fastest of the defensive ends to drop Friday, sporting 86 Speed, but compared to some of the above contemporaries, Addison is slightly lacking in the well-rounded pass-rushing statistics.

That should be easily fixed in a given theme team, however, making all four of the defensive ends legitimately end game items regardless of whether they sit on a theme team or not. 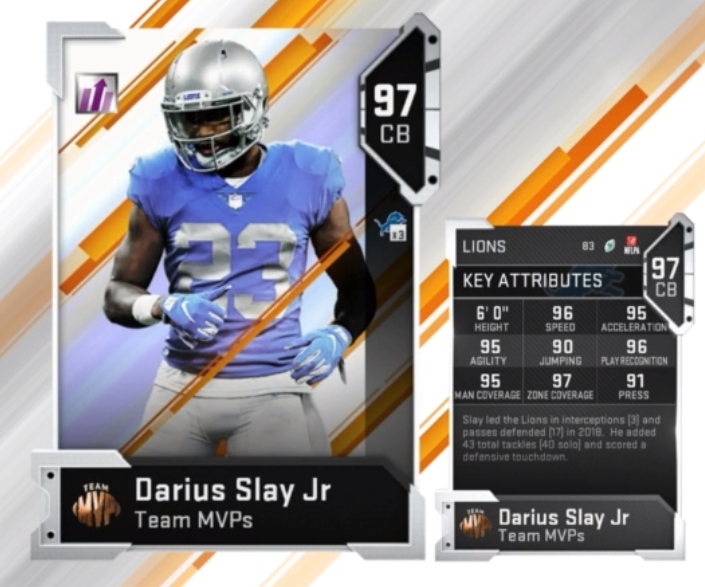 Slay will be one of the most sought after items from the latest round of MVP players.

While the secondary didn’t see much of an upgrade this go around, the lone CB to drop Friday is certainly one of the best available at the moment.

96 Speed Darius Slay should be enough to entice players who previously invested in his 93 overall Harvest version, but that speed coupled with 95 Man Coverage, 97 Zone Coverage and his height (6-foot-0) will make him incredibly enviable for those who hadn’t yet. 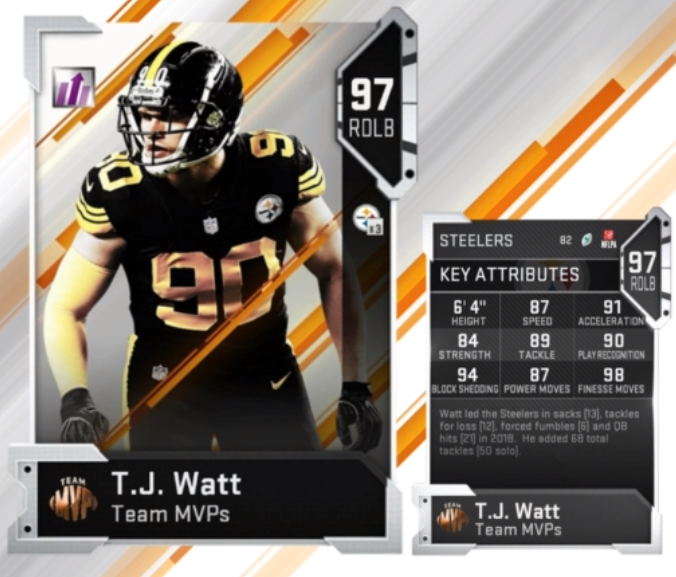 Watt headlines a list of players who badly needed upgrades in Madden 19.

The same could be said for 97 overall Steelers Defensive Team MVP TJ Watt, who badly needed an upgrade from his 90 overall Team of the Week card which released in early October.

The majority of these Team MVP updates were obviously needed, but Watt’s was particularly glaring since the outside linebacker nearly doubled his sack total from his rookie campaign (13 sacks in 2018-19 season).

87 Speed isn’t great, but Watt has the necessary amount of pass rushing skills (98 Finesse Moves in particular) to be a threat off the edge in 3-4 defenses. The same could be said for the majority of the defensive lineman, so while the items look good stat wise, at least half likely would only work for a specific lineup. 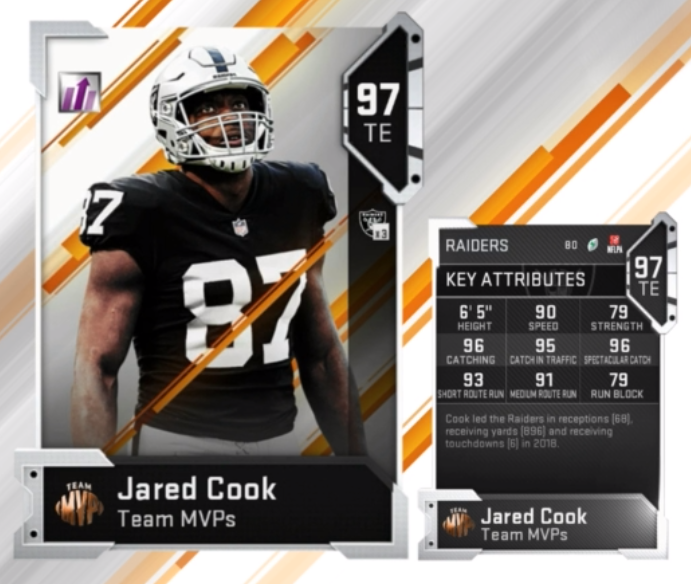 Cook will be a huge weapon for multiple theme teams once he receives his Power-Up.

Jared Cook leads a group of unimpressive offensive items, but it’s worth pointing out the Raiders Offensive MVP could very well leave in the offseason via Free Agency.

The ensuing Power-Up created as part of the MVP program will likely make Cook even more valuable, as Rams, Titans, Packers and Raiders theme teams already stand to benefit by acquiring the 90 stock Speed, 6-foot-5 TE. 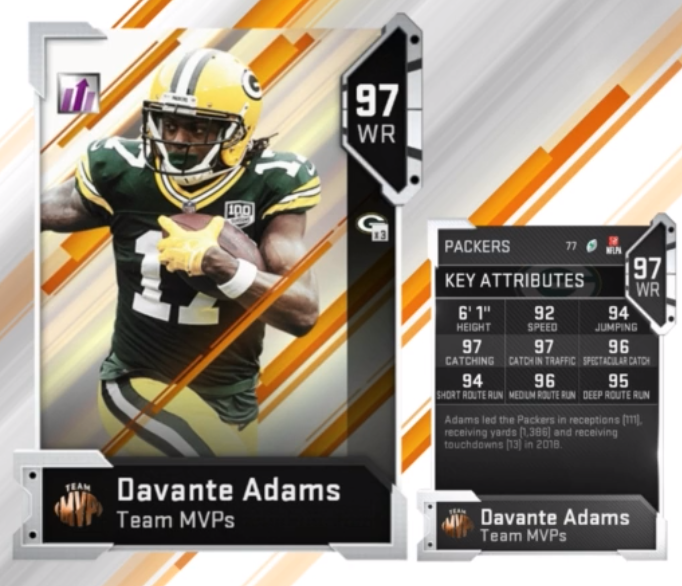 Speaking of the Packers, arguably the most overlooked WR without an upgrade finally saw a well-deserved 97 overall, but that’s about the only good news for this card.

Given Davante Adams was within one catch (111) and 133 yards (1,386) of setting franchise marks for the Packers, while also leading the team in touchdown receptions for the second consecutive season, you’d think the big-bodied receiver would do better than 92 Speed, which was essentially only three speed higher than the 96 overall Larry Fitzgerald card released in December.

Of the 17 WRs in Madden Ultimate Team rated 97 or higher overall currently, Adams ranks just ahead of Mike Evans (91) and is tied with the likes of Keyshawn Johnson and Keenan Allen in the pivotal stat, making the Packers receiver essentially a dud unless outfitted in the proper theme team. 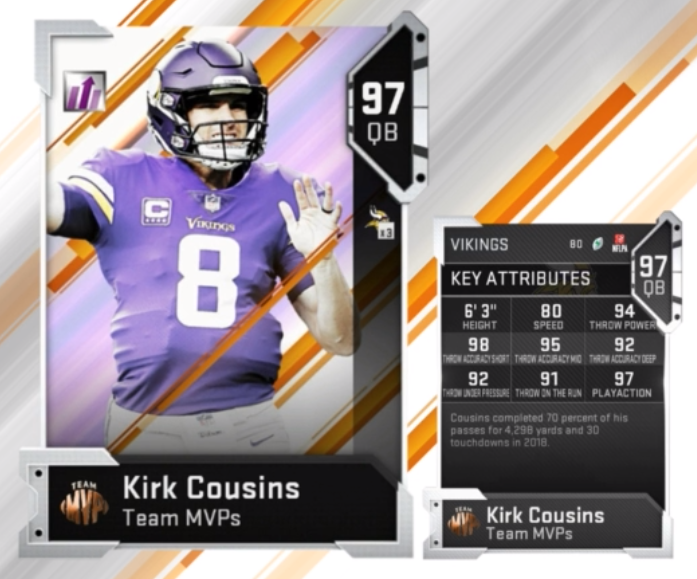 Vikings fans likely “won’t like that” after looking at Cousins MVP item.

Vikings fans will likely treat their 97 overall Team Offensive MVP with similar disdain, as Kirk Cousins wound up earning the honor despite a lackluster end to the 2018-19 season which culminated in a missed playoff berth.

Other than Throw Accuracy Short (-5), Throw Accuracy Middle (-1) and Throw Accuracy Deep (-1), Cousins fails to stack up to 98 overall Ultimate Legend Donovan McNabb in literally every other way, so it’s fair to suggest that Vikings theme teams will likely ignore their newest edition, particularly after the dismal recent events. 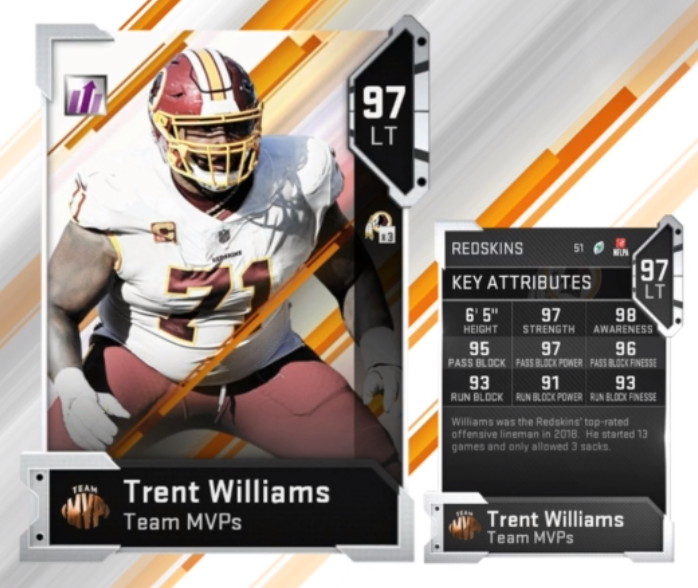 There’s not much to say about the final Team MVP, as any offensive lineman is essentially end-game level with only a few months before the start of Madden 20. Trent Williams certainly deserved the 97 overall item given his historical prowess at the position, and the stats seem to reflect that.

Other than Team MVPs, a plethora of Free Agent cards received their Team Chemistry options as part of the previously introduced promo. Along with that, players previously listed with Power-Ups also saw their new teams added with the update, providing more options for new users.