Friday’s edition to the month-long Zero Chill program saw six Legends repackages as part of Ghosts of Maddens Past, while EA also released arguably one of the best bundles to date to round out a hefty drop.

All six of the Legends clock in at 96 overall, the highest to date in Madden Ultimate Team, and represent the best options at their respective positions.

And to make things more intriguing, EA dropped arguably one of the best bundles to date, complete with a rotating set of “featured” options similar to the uber-popular “Blitz” program released following Thanksgiving. 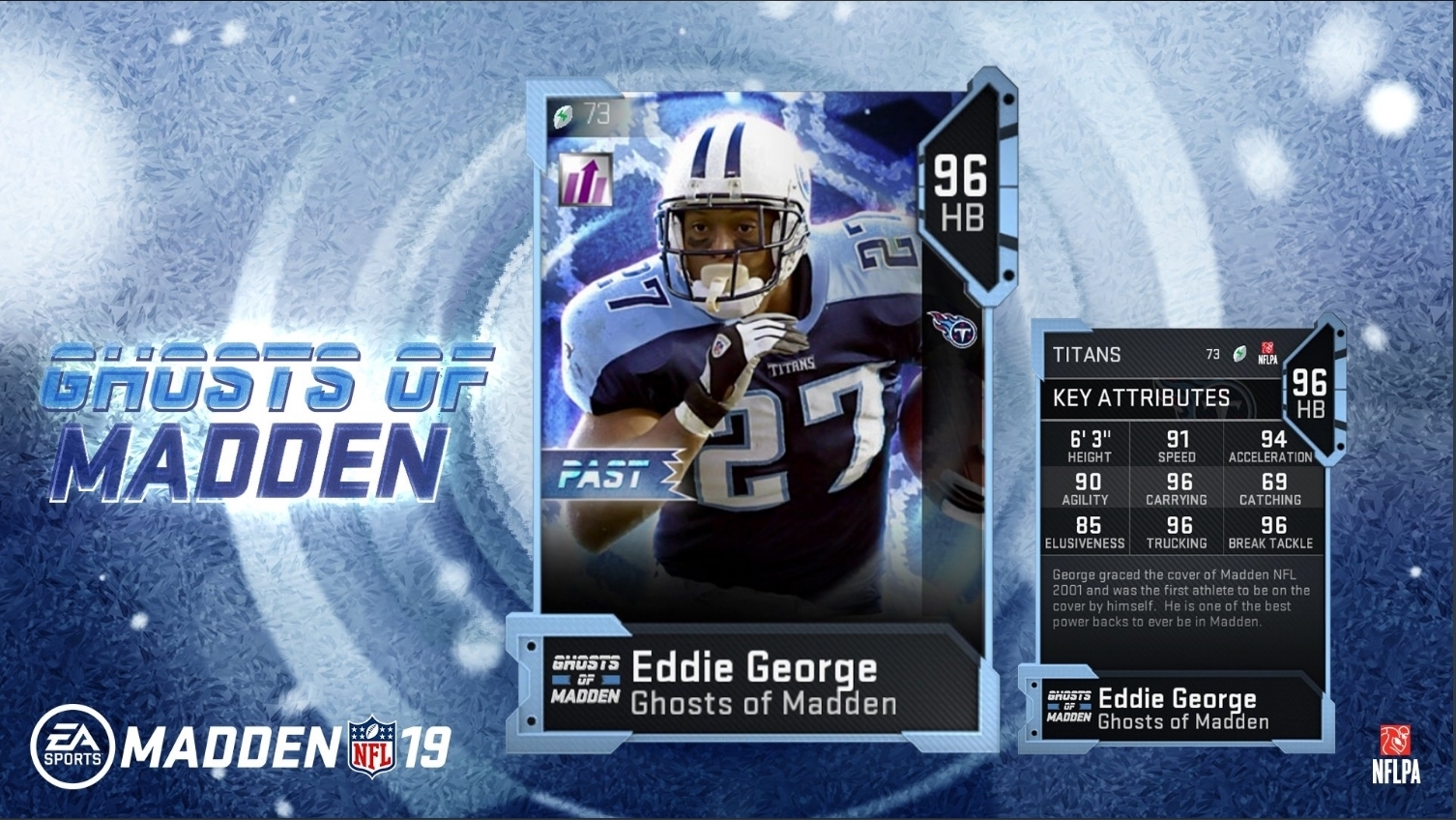 Running back Eddie George kicks off the batch of previously released Legends, as teased by EA on Thursday.

The 2001 Madden coverboy easily becomes one of the best power backs in the game, thanks to 91 speed and 96 trucking, and can get boosted to 94 speed through Tier 10 of the Titans chemistry boost.

While he shares the same position (and team) as another notable trucking RB, 94 overall Team of the Week Boss Derrick Henry, George boasts better stats across the board, including plus seven in the break tackle attribute. 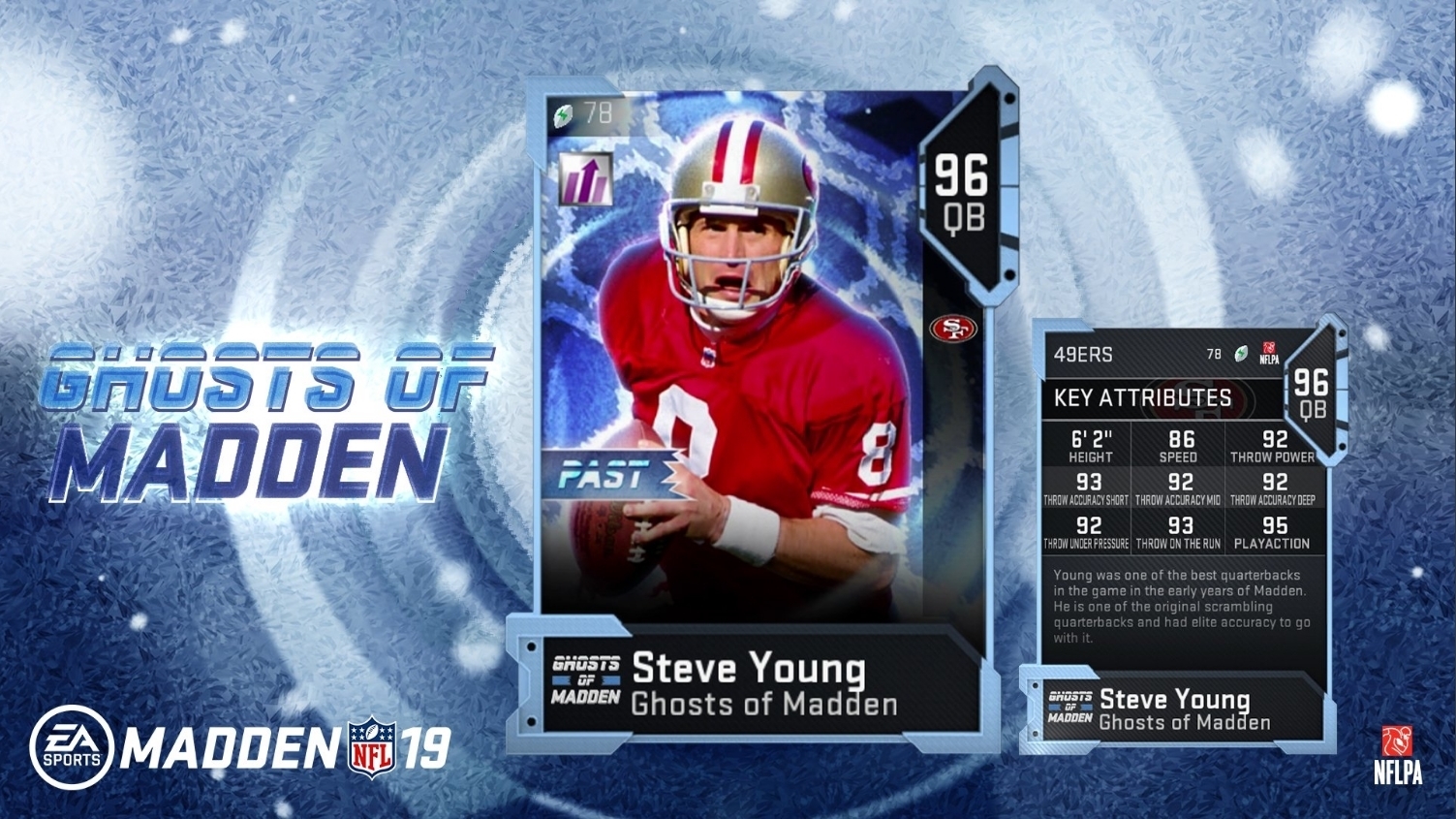 Joining George as part of the Ghosts of Madden program is quarterback Steve Young, whose 90 overall version was the top of the QB meta during the first two months of Madden Ultimate Team.

Young trades slightly slower speed (86) for better throwing stats across the board over 95 overall Gauntlet Donovan McNabb, which briefly reigned supreme atop the MUT QB hierarchy.

The decision not to include an upgrade for 91 overall Legends Michael Vick in this batch of cards will likely anger some, but Young trails only McNabb, Vick, 85 overall Blitz Lamar Jackson and two Out of Position QBs – Walter Payton and Odell Beckham – in terms of speed and still has some of the best passing stats to date. In other words, he’s very good. 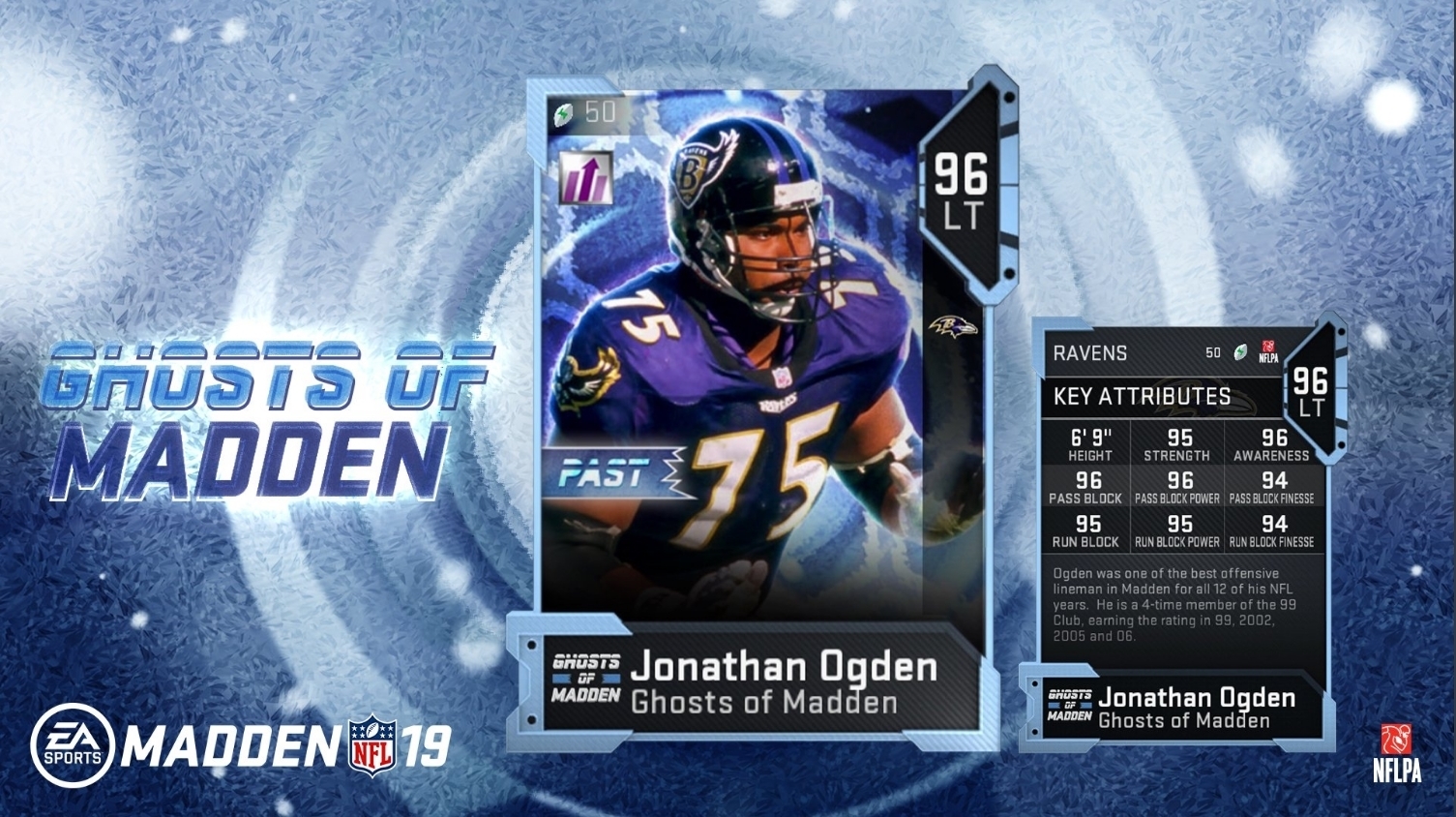 It’s not a sexy position, but 96 overall left tackle Jonathan Ogden is unquestionably the best card to come from this program.

The term “end game” gets tossed around far too often given Madden Ultimate Team will continue adding cards until August, but Ogden could easily act as a starting LT until the start of Madden 20.

57 speed for LT isn’t great, but with 94 statistics in literally every relevant blocking category, you’d be quibbling if you had issues with this card at this point in the year. 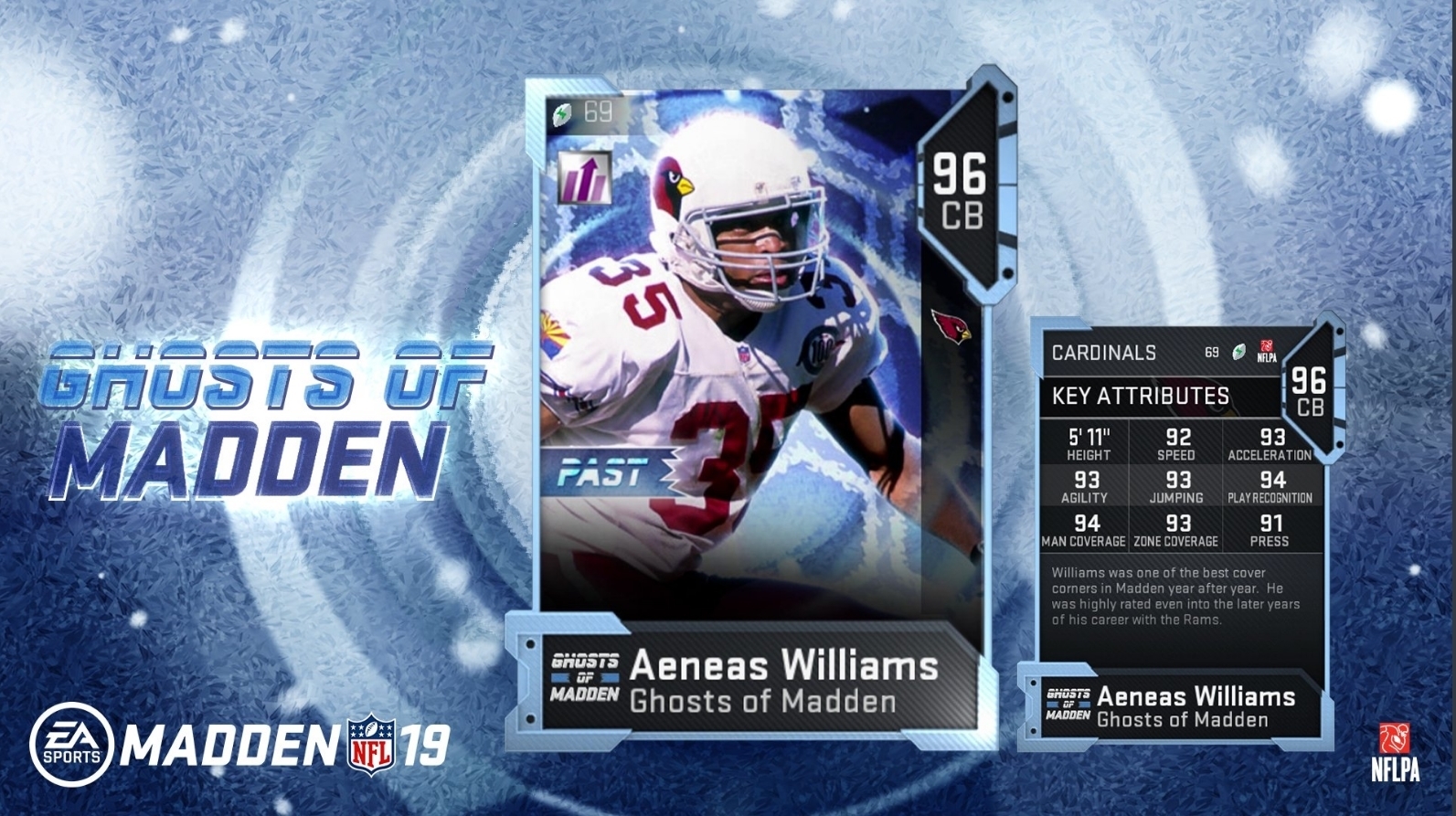 Cornerback Aeneas Williams was arguably the item most in need of an upgrade of the players released, as even his 91 overall card released back in late August had less than ideal statistics for his position.

Thanks to Williams’ Power-Up option, that 91 version is currently selling for nearly double the price he was going for Thursday, emphasizing how notable the improvements were for his 96 version.

While no stat really “jumps” out, Aeneas has enough speed at this point to compete with other relevant cards at his position, and is well-rounded to the point where he’s expected to be viable for some time. 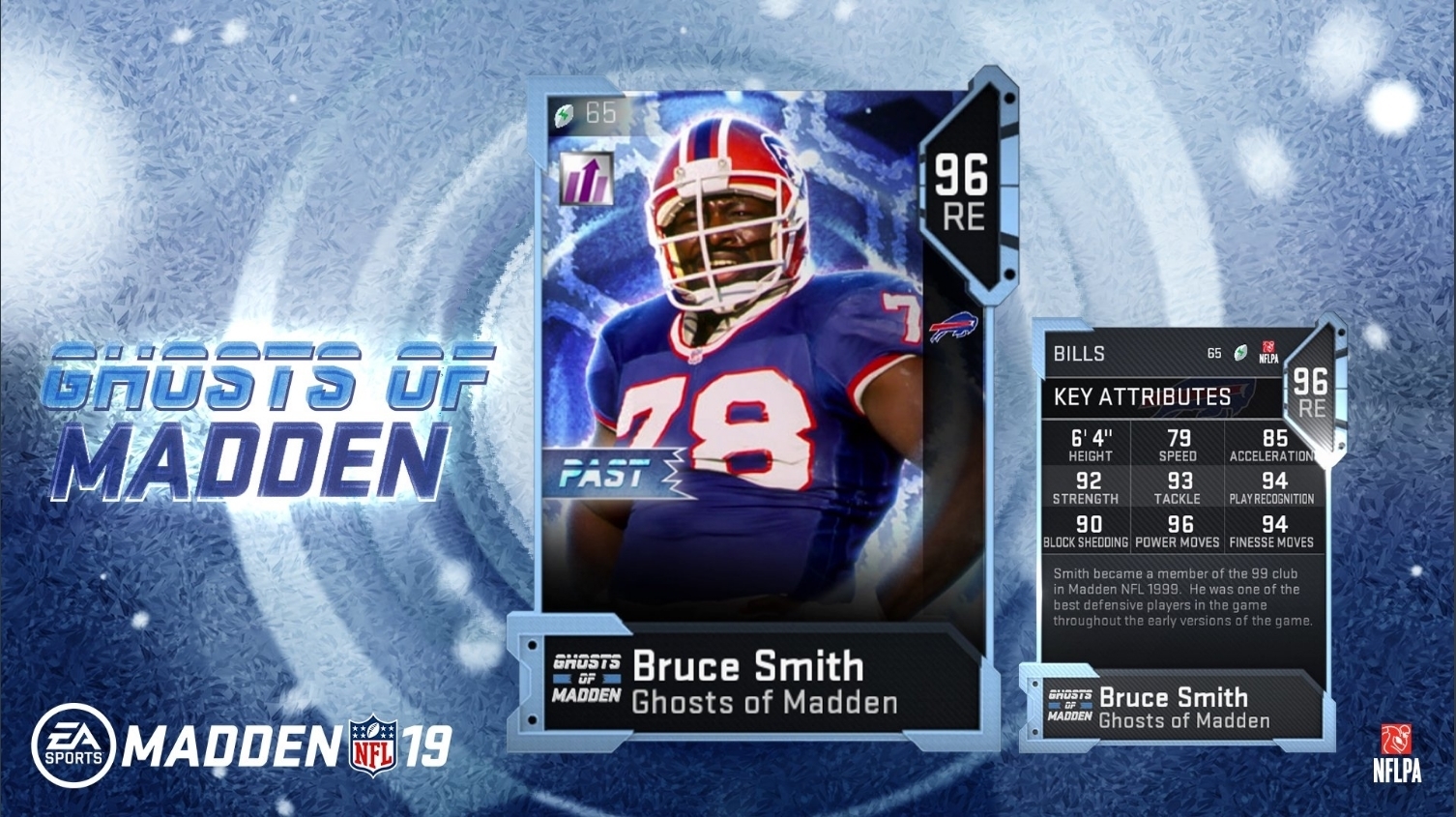 96 overall RE Bruce Smith and 96 overall LOLB DeMarcus Ware both seemed due to improve upon their 90 overall and 91 overall base Legends cards, respectively.

Smith can pretty easily hit 99 power move and 98 finesse move with a few upgrades, but even if you were to opt not to boost the Bills legend, the 96 version should be more than competent as an edge roster.

Ware doesn’t beat the myriad of user options available, but he’s not supposed, and likely only falls behind 95 overall Harvest Lawrence Taylor in terms of linebackers capable of blitzing AND utilizing in coverage if need be. 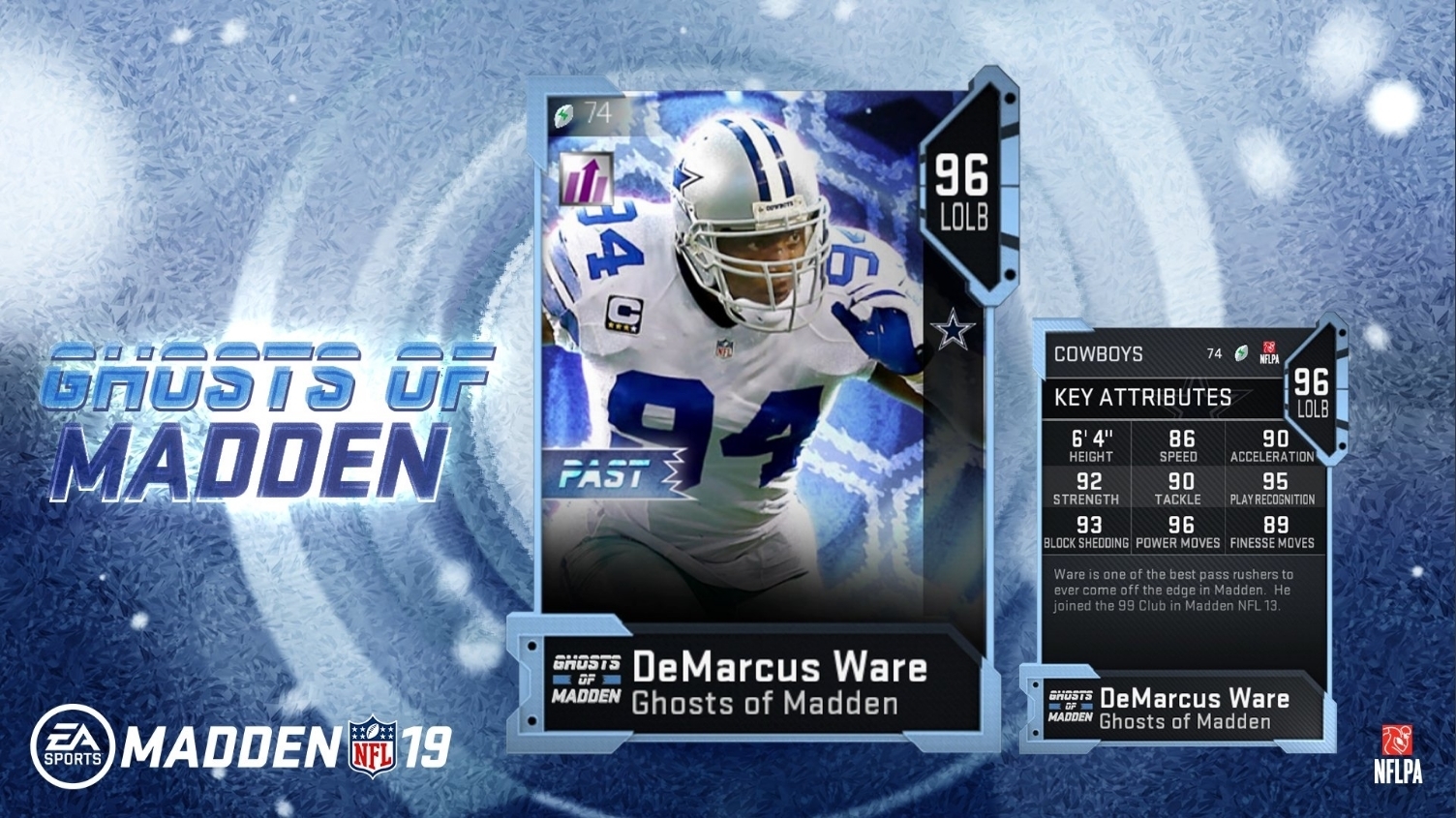 The fact that all of these cards are well below 600,000 coins is thanks to the $100 bundle currently available in stores for an unspecified time.

With such a large coin total guaranteed as the topper, this bundle is one of the better ones to become available this season, and the looming promise of “Holiday Blitz” packs that could yield even more value caps off what has otherwise been a disappointing week for Zero Chill.