Rejoice, Madden 19 fans! The “fall forward” glitch, which appeared following an early March Title Update and has threatened the very fabric of head-to-head contests, was fixed on March 14 in the latest title update.

While many Madden 19 players have been growing restless and worried about the infamous glitch that had been plaguing the game for weeks, EA finally came to the rescue with the March 14 update.

That was one of just a bevy of announcements made throughout the course of the daily EA stream, providing PS4, Xbox One and PC users with two new limited-time items as well as information regarding two separate ongoing promos.

The fall-forward glitch, which incorrectly caused offensive players to fall forwards anywhere from 2-4 yards as part of a broken animation, appears to have been corrected for the most part.

While specific instances seem to remain, the vast majority of plays have stayed true to the real-life psychics of football, which would likely completely change the previously “run-heavy” meta that has developed over the past couple of weeks.

It’s an interesting juxtaposition to the MVP promo, which received widespread criticism following Thursday’s stream thanks to EA’s inability to provide proper information to its player base regarding the 22 teams still without their second 97 overall respective offensive/defensive MVP.

While the whimsical start to the above clip isn’t a direct representation of what has occurred since the March 8 reveal of the second round of MVP players, literally no tangible information about the presumed upcoming 22 cards prompted a fiery thread on the Madden Ultimate Team reddit page, which forced EA Madden community manager, Kraelo, to finally respond, albeit without providing much “actual” information.

Make no mistake, this type of problem is not to be blamed on the Madden Daily Drops representatives, but rather the “running up the flagpole” mentality that seems to occur on a daily basis at EA.

Most of the issues seem to boil down to a lack of communication, which frequently leaves the community feeling dazed and confused between major updates and promo releases.

Compared to popular games such as Fortnite, or even other sports genres, the lack of consistent timelines regarding the arrival of content is hopefully an issue that will be focused on moving forward.

And while the Free Agency promo hasn’t exactly been well-received, EA did manage to mention team chemistry updates to players would begin to be applied March 15, which would seem to indicate there is at least some level of accountability occurring in terms of providing proper timelines. 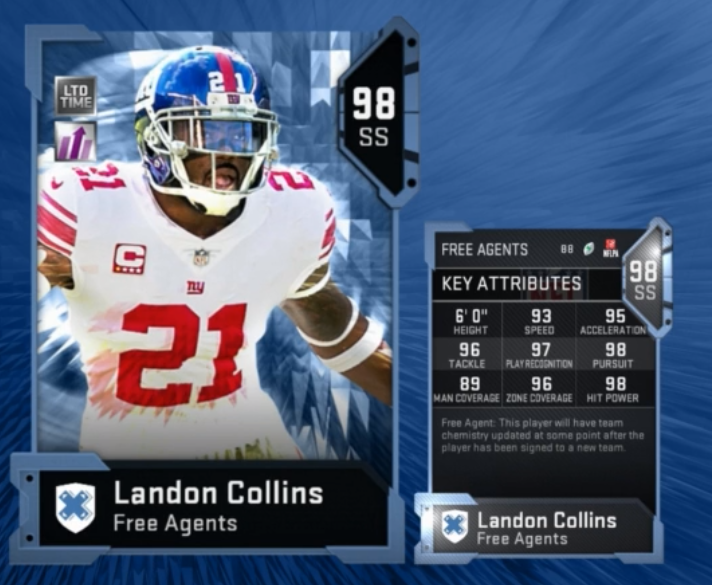 Sitting at 93 stock Speed, Collins will be among one of the best safeties throughout the duration of Madden 19.

Compared to the rest of Thursday’s hijinks, the two new LTD cards joining the aforementioned Brown and Beckham were hardly interesting, with new Redskins strong safety Landon Collins joining Golden Tate, who only hours ago signed with the Giants, as 98 overall items.

Collins is by far the more enticing of the two options, as the former Giants safety previous boasted a 93 overall Zero Chill item which was far below his level of play in the 2018-19 NFL season.

Only strong safeties, Super Bowl Past Rodney Harrison, NFL Combine Adrian Amos and MVP Antoine Bethea, boast a similar Speed (93) and Zone Coverage (96) combo which should make Collins among the better SS in the game, particularly with 96 Tackling. 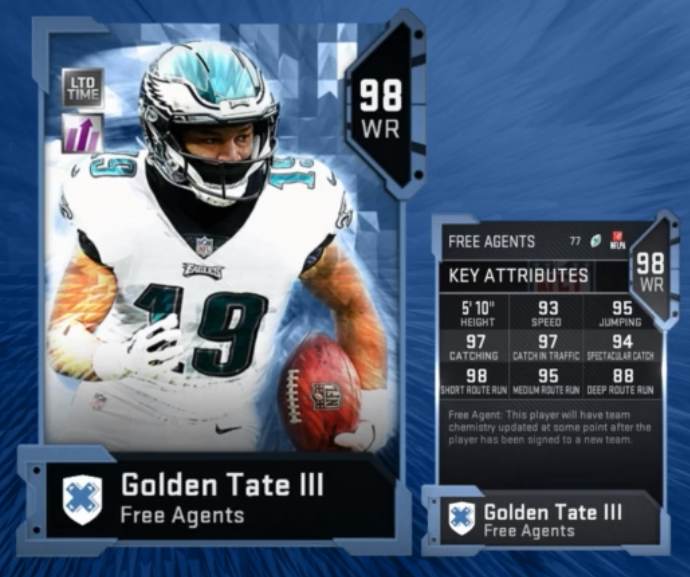 Tate is likely too slow to be of any use outside of a theme team, but that shouldn’t upset Seahawks, Giants, Eagles or Lions fans.

Tate will make Seahawks, Lions, Eagles and now Giants theme team owners happy, but with 93 Speed in the middle of March, it’s hard to get too excited for the diminutive receiver.

A LTD item of this high overall caliber would normally be the death kneel in terms of value, but with a guaranteed 500,000-coin floor and the incredibly cheap training options available on the open market, anyone who realistically would be interested in Tate will have already powered him up, and thus be set to pick up the receiver in a week after the training options update.