A new House Rules event and Easter-themed promo dropped April 9 providing Madden 19 Ultimate Team players on PlayStation 4, Xbox One, and PC plenty of content to devour in the coming days and weeks.

Perhaps mercilessly, the new promo still requires the use of “picks” as the third currency, meaning players who stacked up on the cheap option in past weeks could wind up profiting handsomely.

Five overall 97+ items also joined the fray, with another round of “offensive” Color Smash players likely on the way. 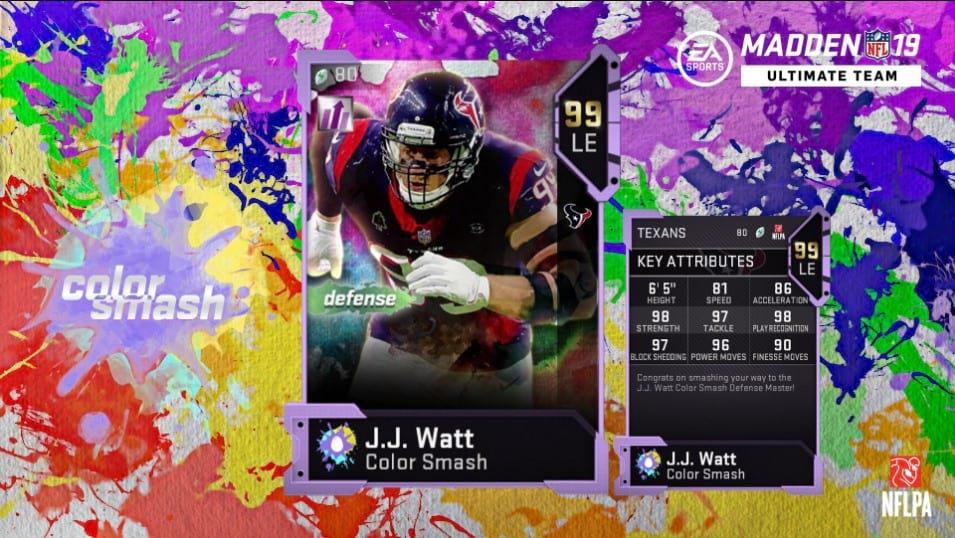 Watt joins a select few defensive ends who could be valuable as a pass-rusher or a user.

JJ Watt is the feature “master” set item for the defensive side of the Color Smash promo, joining an increasingly-long list of stock 99 overall items.

Much like Julius Peppers’ 99 overall Career Tribute item, Watt will likely be sought after for his use as a surprise user given his height (6’5), 88 Jumping and 84 Catching – the latter of which could be substantially boosted via his Power-Up.

Of course, that will require boosting his 81 stock Speed, but even still, Watt is a tremendous option along the defensive line.

Perhaps the only negative is that a significant percentage of the stud defensive ends currently available play on the left side as opposed to the right, meaning constructing an end-game lineup will need to factor in the positions in order to receive the chemistry/team boosts. 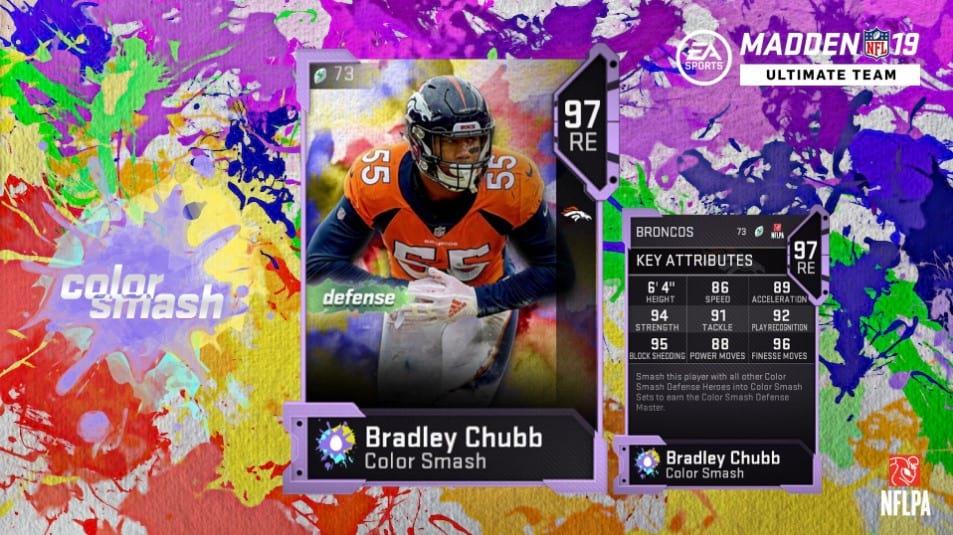 Chubb will be a highly sought after “spy” against the plethora of speedy QBs in MUT.

That’s semantics though, and surely is less of a worry considering users who complete the Watt master set will receive RE Bradley Chubb and three other 97 overall defensive players back as non-auctionable/tradable items.

Chubb’s speed (86) is the most enticing aspect of this item and figures to be a fairly good option as a spy in a meta heavily dominated by fast quarterbacks. 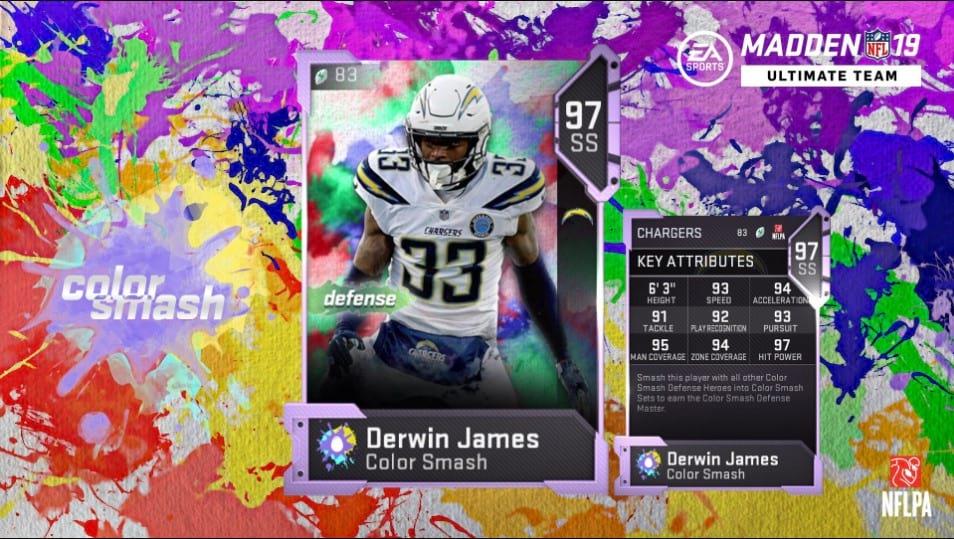 Missing out on Secure Tackler is a small pot mark on an otherwise excellent upgrade to the Chargers’ safety.

It probably says a lot about EA’s recent promos when three of the four 97 overall items are actually rather enticing, as Derwin James’ 97 overall item is also intriguing aside for the presumed Power-Up that will finally enter Madden Ultimate Team, perhaps as early as Sunday.

93 Speed is a bit depressing, but 95 Man Coverage, 94 Zone Coverage, and 97 Hit Power make the Chargers safety arguably one of the most well-rounded players out there.

The one knock is that James cannot get Secure Tackler, which has been essentially standard for safeties in the current meta, but that’s a small price to pay for a card that has proven to be reliable even as a 94 overall Ghosts of Christmas Future item back in December. 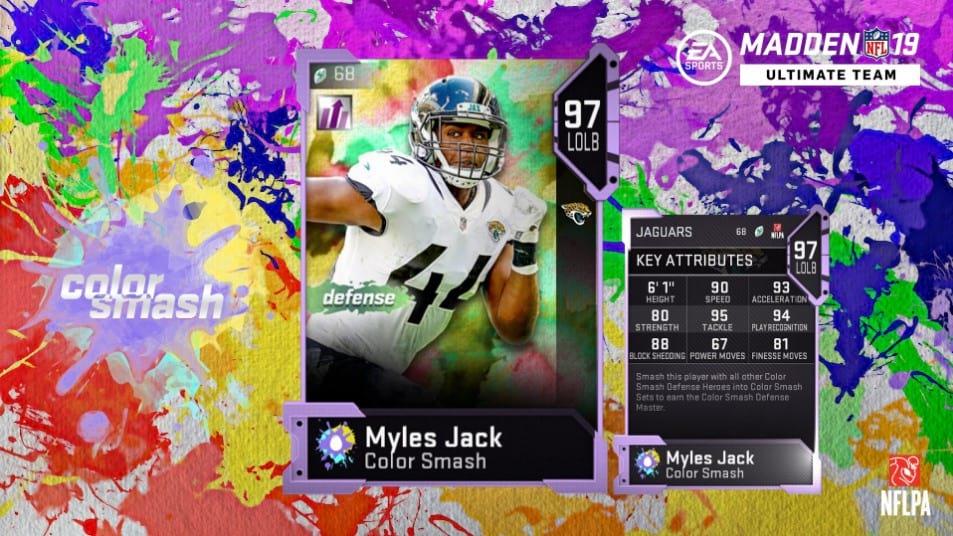 Jack is exclusively a coverage linebacker, but what he does, he does very well.

Myles Jack rounds out the trio of interesting 97 overall items, as Jaguars outside linebacker hadn’t had an upgrade since his 93 overall card in November.

Essentially a coverage option entirely, Jack could be used as a user but might be more valuable AI-driven considering he has 90 Zone Coverage and a respectable 84 Man Coverage.

While many users running a base 3-4 defense will complain about his 88 Blockshed, Jack is among the best at his position for his given skillset, which is about as good as you can hope for when it comes to EA balancing cards. 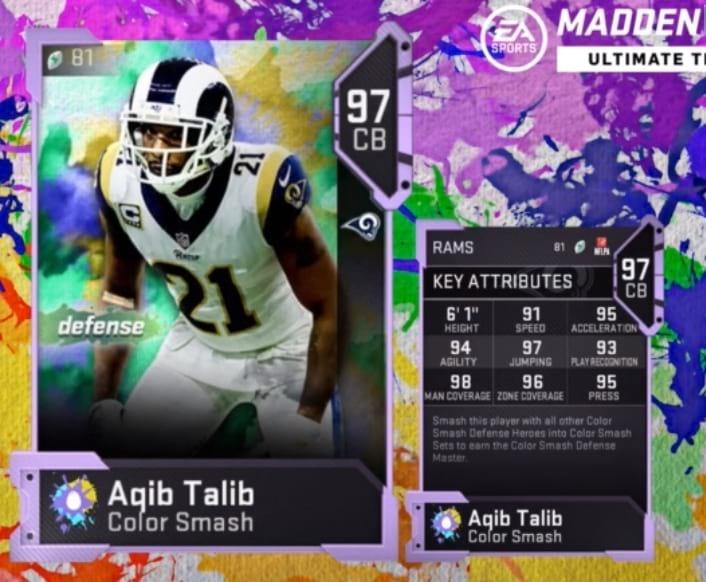 Talib joins a host of players that should have had a Power-Up item sooner, and that should be getting one in short order.

Aqib Talib rounds out the higher-end items, and make no mistake, the veteran cornerback will be a joy slotted into a plethora of theme teams (Bucs, Patriots, Broncos and Rams). At 91 Speed, however, it’s hard to suggest Talib, at least as a stock card, is anything more than quicksell fodder, even considering his more-than-respectable coverage stats.

It’s worth mentioning Talib, along with Chubb and Derwin, do not have Power-Ups currently, but considering high overall set items have gotten Power-Up items in the recent past, it seems all but likely they’ll be retrofitted for theme teams in the near future.

Those items, along with 14 other 88-94 overall Color Smash players highlight the “defensive” drop. Considering a “Tie Dye Color Master” set is available now, which will reward one of the “offensive” and “defensive” 99 overall masters in NAT form plus 750,000 coins, it seems safe to say the “offensive” side will of this new promo will drop in the not-so-distant future.

Similar to “presents,” “eggs” could be a lucrative way for users to exchange their “picks” currency should they get lucky with the re-roll sets.

Perhaps more mysterious, a handful of collectible “egg” items are available in packs and in the MUT Store, with four different “tiers” of eggs currently available.

Much like the Christmas promo which rewarded different “presents”, the eggs, which hatch April 21, all seem to tie in with different overalls, meaning Tier 1 Eggs are of the 88-90 overall, Tier 2 90-92 and so on.

While eggs have in the past contained hints to help eagle-eyed users identify the possible reward, EA representatives reiterated on multiple occasions that would not be the case this go-around.

More eggs will likely drop tying into the offensive side of the promo, meaning users hoping to get lucky with the MUT store options should re-roll now, with the pool of available options likely at the smallest point it’ll be.

For the first time ever, House Rules will take place in the MUT Draft format.

This, of course, ties into the newest iteration of House Rules, which for the first time will be played under the MUT Draft format.

While the actual ruleset – 1st and 5, with two chances at getting a first down – has been repeated before, the area in which the games will be played is an interesting wrinkle to the weekly H2H format.

Located inside the MUT Draft header, users will first need to draft their lineup in order to play their games. After winning 10 games, players will then earn one of the four 97 overall items pictured above. These games should go fairly fast, and it helps that users don’t need to pay tickets to enter the event – a feature which has previously hindered people from enjoying MUT Drafts in the past.

Users have reported the 1st and 5 format reverts back to normal when a player reaches a certain tier in MUT Draft, while others have reported the revert happens upon reaching the “sixth” game, which typically represents the “Super Bowl” in normal MUT Draft matches. Either way, a win under those conditions still counts for the needed 10 wins, which is all most people will care about.