Note: this article was written before the news about the departure of CvMax from Griffin. It should not impact the conclusions of the piece.

As a young team, Griffin had nothing but glowing comments both leading up to their qualification for the LCK in 2018 Summer, and during their debut split.

Whispers as far back as the 2017 World Championship bootcamp highlighted Griffin as the Challengers Korea team that would dominate the coming years.

When it comes to regular season, Griffin have certainly deserved the hype. In 2018 Summer, Griffin showed a bit of green by placing second to the KT Rolster super team, but in both splits of 2019, Griffin nearly dominated regular season with records of 15-3 and 13-5 in series.

Unfortunately, Griffin’s glow never held up when it came to the bracket stage. LCK’s unique Playoffs system only requires the first seed regular season team to play one best-of-five in the Grand Final. As such, despite placing second in every Playoff series in which they have participated, they have only actually won one series of four (the 2018 LCK Summer semifinal against Afreeca Freecs). Add in Griffin’s Regional Gauntlet loss to Gen.G in 2018, and Griffin have lost four out of five of their best-of-five series in LCK.

All of this has given Griffin a reputation for choking. That is, many LCK fans believe that, due to Griffin’s young roster and inexperience, they cannot put up the same form they show in the regular season as they do in Playoffs, and their losses do not represent the team’s true skill. As such, speculation also pegs Griffin as a good best-of-one team headed into the World Championship.

A closer examination of Griffin’s games, however, suggests that a lot of Griffin’s flaws remain pretty consistent game-to-game. They lose consistently — especially in the most recent split, 2019 Summer — to the same teams with very specific characteristics. Griffin don’t “choke,” they simply aren’t the best team coming to Worlds from the LCK. 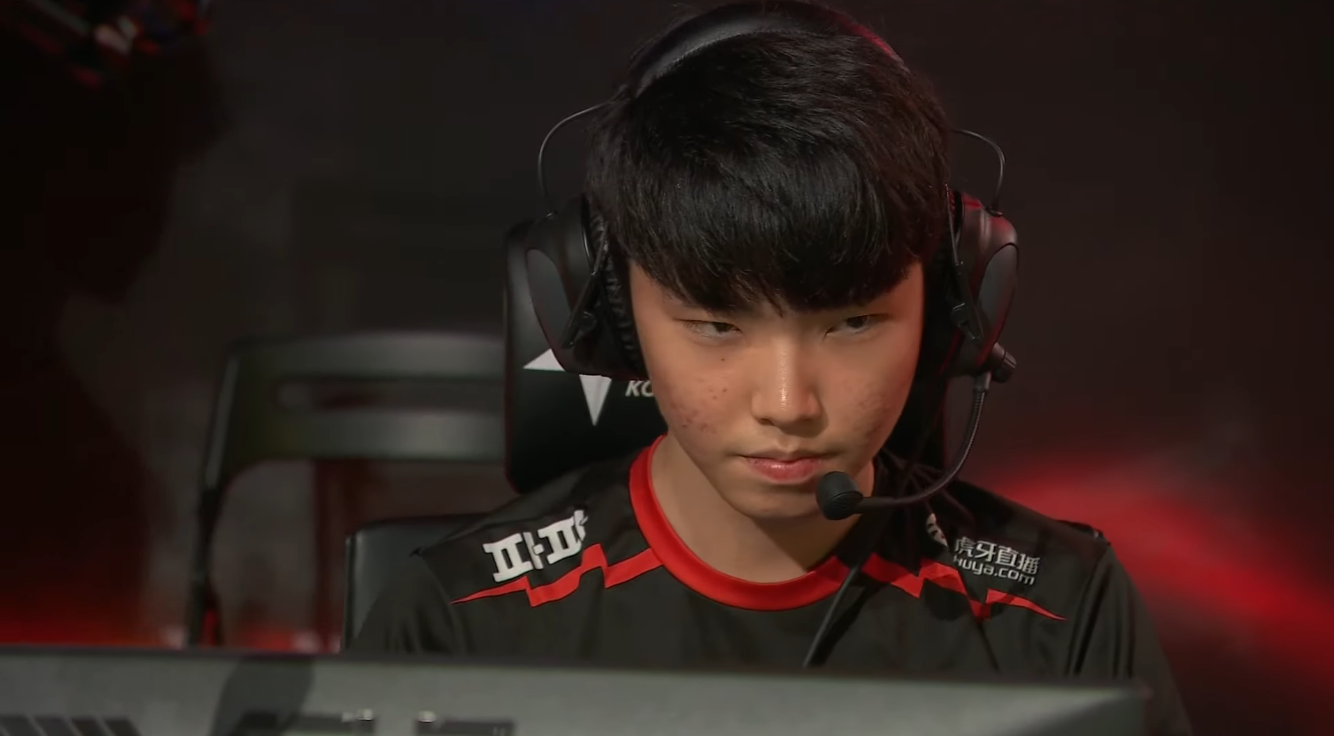 The term “Best-of-One Team” has been used a lot in the past by analysts to characterize teams that struggle in extended series. A best-of-one team can exist as such for a variety of reasons. Either they struggle with adaptation due to small champion pools that can be targeted as teams ban different champions throughout a series, or they prepare poorly with an easily targeted cheese strategy that they cannot execute two games in a row.

It makes very little sense to refer to Griffin as a best-of-one team in that context. Not only has Griffin only ever played best-of-ones at Rift Rivals in 2019 (where they represented one of the LCK’s only two losses to the LPL this year), but Griffin haven’t lost more in Game Ones than in other settings during the regular season.

The closest approximation to a best-of-one that one can argue Griffin have played outside Rift Rivals is the first game of any given series. Of Griffin’s 34 game losses in LCK regular season, 13 have been Game One losses, comprising 38% of their total losses, a very reasonable number for best-of-threes that doesn’t make Griffin seem like they are any more or less likely to lose a first game than any other game in a series.

In addition, calling Griffin a best-of-one team diminishes their accomplishments in defeating SK Telecom T1 in Game Three of the 2019 LCK Playoffs after falling down two games: a feat no other team in the running managed to accomplish this split. In addition, in 2018, Griffin participated in two five-games series in LCK.

One took place against KT Rolster and the other against Gen G. In both series, Griffin managed to win games after dropping them to their opponents. In KeSPA Cup in 2018 as well, Griffin managed decisive best-of-three and best-of-five series victories that showed no sign of them having a different form in more extended back-and-forths.

As a result, it seems very likely that Griffin’s reputation as a bad playoff or as a best-of-one team comes almost entirely from their two series against SK Telecom T1 in 2019 Spring and 2019 Summer Playoffs. But in those series, they showed problems consistent with their regular season struggles. 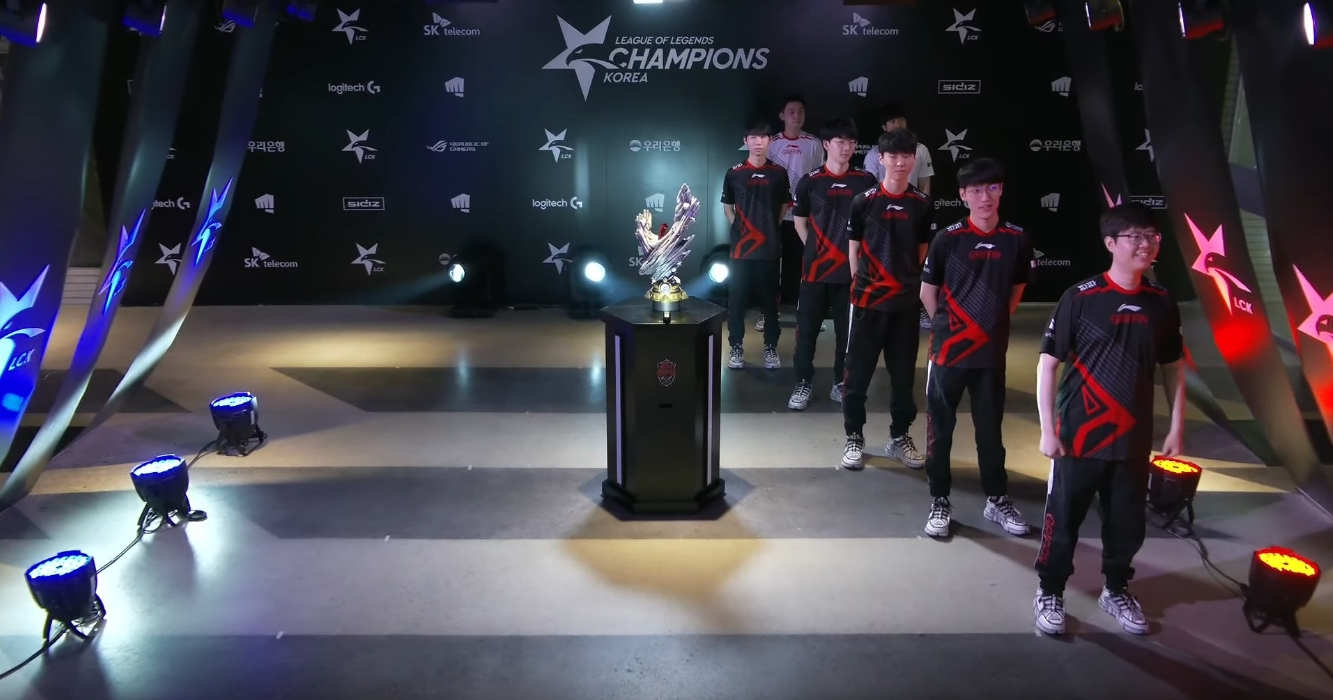 A cursory look at Griffin’s regular season game losses actually draws a pretty clear line across the kinds of teams Griffin wins against and the kinds of teams they lose against. Griffin dropped single games in LCK Summer 2019 to Afreeca Freecs, SANDBOX Gaming, DAMWON Gaming, SK Telecom T1, and Gen.G.

The top six teams in the LCK standings were Griffin, DAMWON Gaming, SANDBOX Gaming, SK Telecom T1, Afreeca Freecs, and Gen.G. Griffin didn’t lose a single game to the bottom four teams, but all of the top six could win single games or series against the LCK first seed team.

As such, Griffin’s consistency served as the team’s greatest asset in securing first place. While SK Telecom T1 dropped full series to Hanwha Life Esports and KingZone DragonX, Griffin remained steadfast in only dropping to other teams that could contest for the top. Griffin won and lost one series against SK Telecom T1 in the LCK regular season, and in the series they won, SKT T1 didn’t play with the roster that eventually became their stable starting five. They made multiple substitutions across the two game series, including Kim “Gori” Taewoo for star mid laner Lee “Faker” Sanghyeok in Game Two.

Griffin can indeed butt heads against some of LCK’s steepest competition, but they don’t always win. So discussing the team’s actual strengths and weaknesses seems much more productive than simply writing them off as nervous or inexperienced. 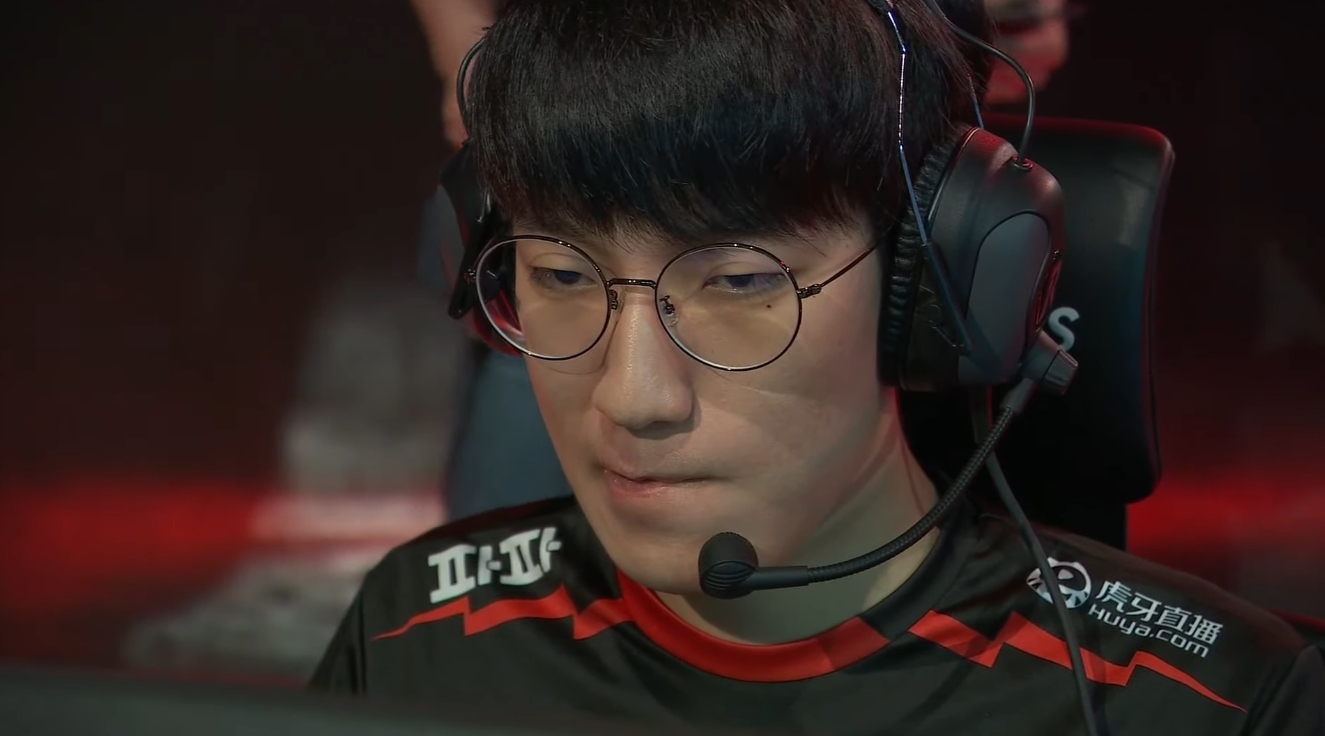 Jungler Lee “Tarzan” Seungyong stands out as Griffin’s most celebrated player by far. He occupied multiple top spots on the Korean solo queue ladder even when junglers didn’t make up most of the top fifty. Tarzan’s raw mechanical prowess seems obvious to everyone, but a noticeable decline in Griffin’s success between Spring and Summer can partially fall at his feet.

In some cases, as in Griffin’s loss to Afreeca Freecs earlier in the season, opponent junglers will focus the top side of the map to accelerate the game against Choi “Doran” Hyeonjoon or Choi “Sword” Sungwon. That strategy also worked well for SK Telecom T1 in the Grand Final.

But more often than not, teams succeeded against Griffin by having a better scaling top laner and leaving him to survive while the jungler played for dragons and then rotated to the top side of the map. Examples of this include the series against SANDBOX that took place shortly after the series against Afreeca Freecs, the game against FunPlus Phoenix at Rift Rivals, and many of the losses to Gen.G.

Gen.G’s near consistent upper hand over Griffin since the newer team joined the LCK provides the most interesting insight into Griffin’s problems. That comes from the fact that, at a very surface level, Gen.G is a very similar team to Griffin.

Both teams have a strong reputation for mid-to-late game team fighting. Both teams have (this year) had well-known young junglers with strong individual mechanics. Yet on paper, Gen.G seems significantly worse than Griffin with the exception of instances when Gen.G play against Griffin. 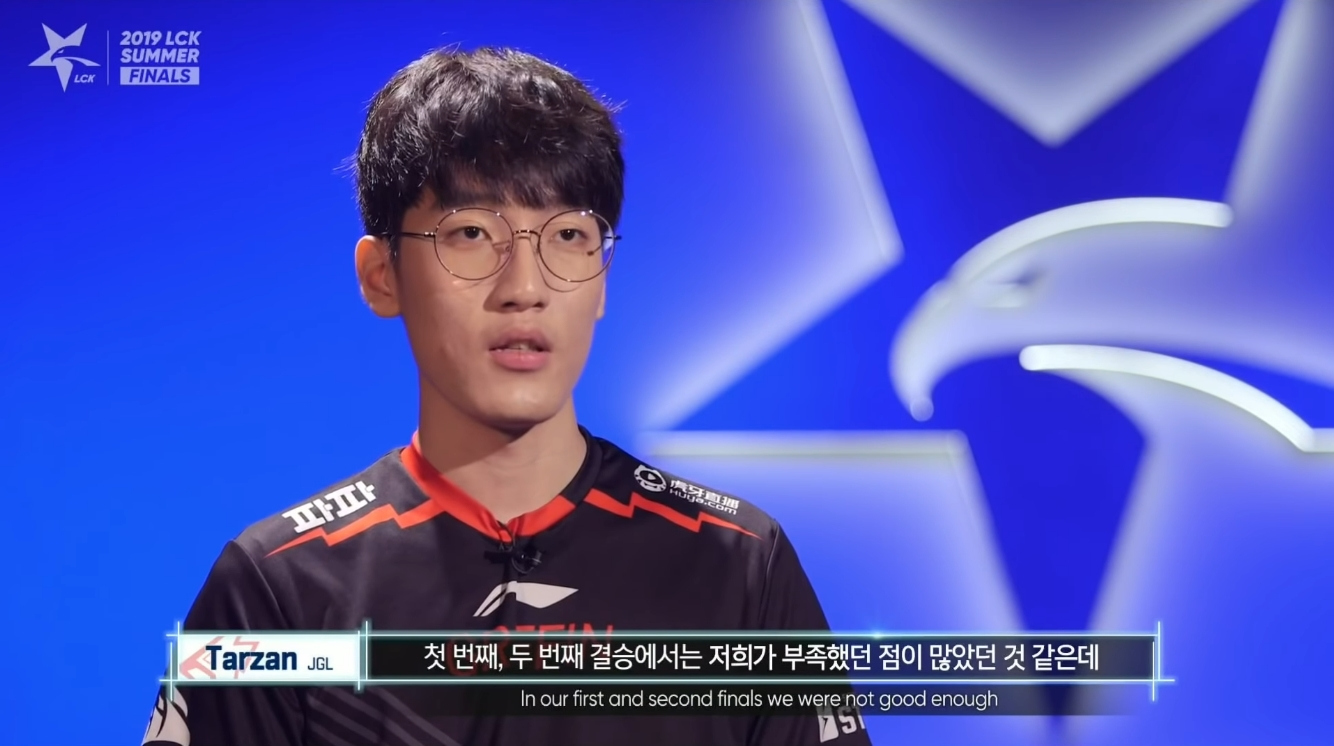 A lot of this comes from the way Gen.G play the map out. In all of the instances mentioned above where Griffin lose out, Tarzan either hovers around the top side of the map ineffectually looking for a strong side trade or fails to get an early game advantage in other lanes or playing for other objectives. In most of Griffin’s losses, it seems as if the opposing team’s jungle tracking is better, as their lanes remain safe while Griffin’s fall prey to obvious gank windows.

Then, if nothing happens to accelerate either side, as is often the case between Gen.G and Griffin, the team with the better top laner creates problems for Griffin to succeed. Gen.G’s Lee “CuVee” Seongjin, despite peaks and troughs in form, still seems to pressure side lanes better than almost any other player in the league, especially with the likes of Camille.

A lot of this comes from Gen.G’s more diligent map setups. Gen.G played much more defensively for vision even in a situation where Griffin denied the Camille. They played more for the wave in the center of the map as a unit, and Sword got caught out by a flank instead of waiting to fight for the wave. As the game progressed, Gen.G showed better coordination between four members of their team and the sidelaning CuVee than Griffin showed with Sword. That allowed them to find better windows for fights even with Sword winning the side lane.

But why a lot of this falls down to Tarzan and not Sword or Doran, despite the obvious gap in skill between them and the top laners they lose to, is that Tarzan often mis-positions when Griffin as a team want to contest for the mid lane. When Griffin’s bottom lane gets ahead enough that they can contest the mid wave 2v3, Griffin can win easily, and Sword and Doran’s lack of coordination in sides doesn’t come through as much.

When that doesn’t occur, Tarzan should head to the mid lane to contest the wave with Viper and Son “Lehends” Siwoo. As I pointed out in my article about SK Telecom T1, he seems to do that more often than not. 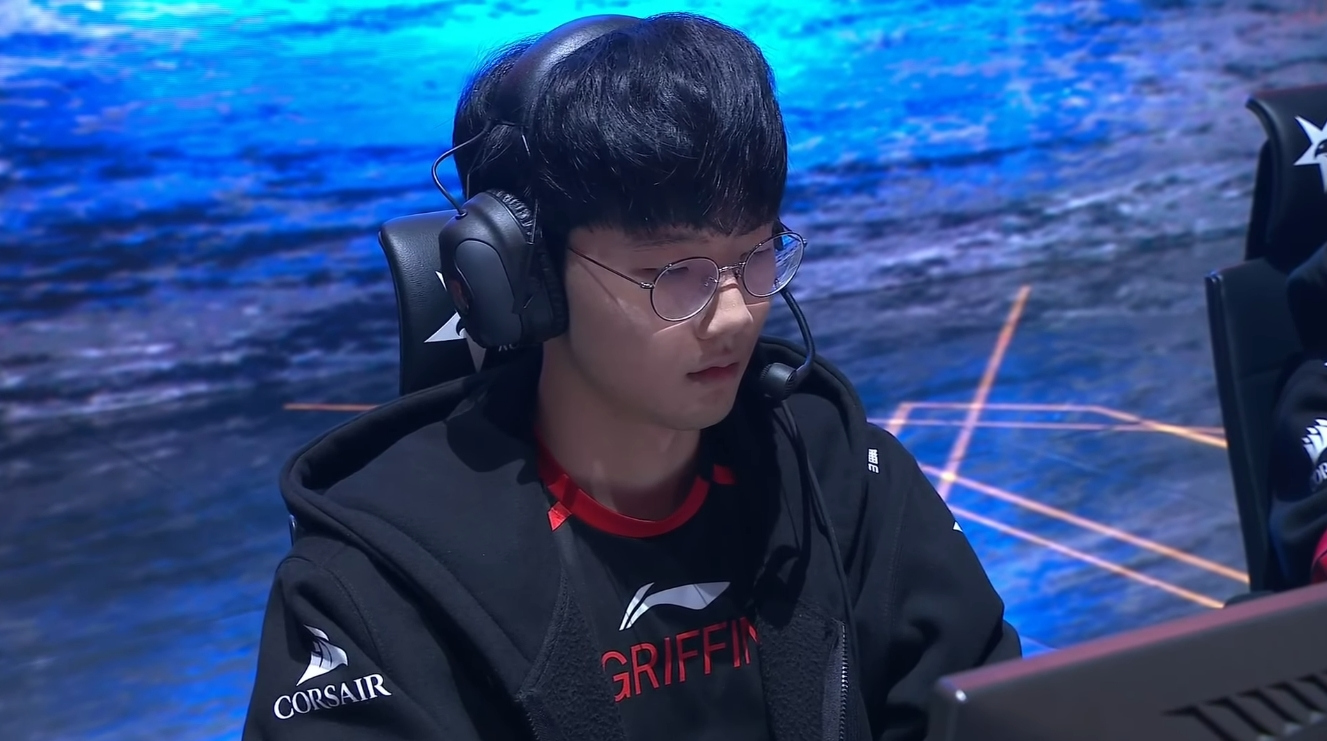 That also showed up in losses that Griffin experienced in the regular season, most often in contests for objectives after resets. Both Afreeca and SANDBOX could initiate fights around their top laner advantages after they swapped to the bottom side of the map. In Afreeca’s case, it yielded an Infernal dragon because Afreeca could funnel Griffin through Griffin’s jungle by denying them the lanes in the mid section, and collapse upon them with Taliyah’s ultimate.

Because Griffin struggle to contest the mid wave with their jungler, having a more skilled top laner and a better scaling top lane champion allows teams to deny Griffin two lanes of priority in the mid and late game. That makes it much easier to split a team off from objectives using the waves to zone them and deny Griffin the ideal team fight in which they usually excel.

Griffin enter the ring against Cloud9 and G2 Esports

No evidence suggests that Griffin struggles more in extended series than they will in Best-Of-Ones at the World Championship. Rather, Griffin is the most consistent team coming to Worlds from the LCK. They will lose to teams with a strong top-jungle duo that pick for winning a side lane 1v1 at two items.

While this article hasn’t investigated Cloud9 and G2 Esports enough to definitively conclude whether or not they’re up for the task, both have reputations for strong individual players in the top and jungle role. Given Griffin’s very consistent flaws, they shouldn’t be considered more fearsome in a best-of-one setting.

NOTE: I wrote this article prior to the announcement of the departure of Head Coach Kim “cvMax” Daeho. This article focuses on Griffin’s fundamental approach to the game between regular seasons and playoffs in the LCK. The article remains relevant, as