Following a 2-1 series win against SANDBOX Gaming to close out the 2019 LCK Summer Season, Faker sat down with Ashley Kang with Korizon Esports to talk about the game and the upcoming playoffs.

In a video uploaded to Korizon Esports YouTube channel, Faker explains his position.

When asked whether he would prefer to play Afreeca Freecs or Gen.G, Faker said he doesn’t mind playing either, but acknowledges that the team has performed better against Gen.G. But Gen.G would fall to DAMWON after this interview, so SKT will play Afreeca in round one of the arduous King of the Hill style bracket.

Surprisingly, Faker is actually looking forward to the long run. When asked about their lower playoff standing, and if it will affect their confidence, he says it may actually benefit SKT.

“We will play earlier and not get rusty on stage,” he told Kang.  Faker believes playing all the way through playoffs will help recover their performance and get back on track, and is important for their Regional Finals and Worlds performances.

For Faker and SK, this summer has proven to be a lot more difficult than their spring season. This past spring they finished second at the end of the season, and won back-to-back 3-0’s against Kingzone DragonX and then number one team Griffin to claim the Spring Playoffs championship.

A first place finish in the Summer Playoffs means an automatic trip to Worlds, but even just making it to the finals means SKT would finish first in Championship points. 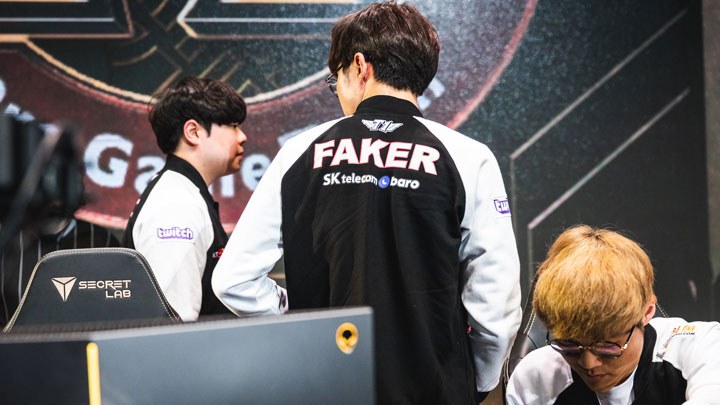 Faker with SKT teammates during the 2019 MSI semifinals

During the interview Faker also acknowledged that he wanted to see more individual effort from each player on SK. “The most important thing will be for individual SKT players to put in an effort to become even better,” he told Kang.

Finally, he thanked the fans who stayed in the arena so long to watch their match despite the long pause that occurred during the second game.