Fortnite pro leaves organization after being accused of racism

The Fortnite competitive scene was shocked on July 2 when an argument over the aim assist abuse topic boiled over into a serious allegation of racism.

Ghost Gaming’s controller pro Issa ‘Issa’ Rahim posted a video on Twitter playing without aim assist to demonstrate his skill without the mechanic which many PC players feel is ‘broken’. His comments sparked a massive argument in his mentions, including the opinion of Bloodx, but Issa hit back with a screenshot accusing showing his fellow pro player use the racial slur.

get off my mentions u cunt pic.twitter.com/aFXg384QRr

Despite denying the allegation, Bloodx revealed in a statement on Twitter that he would no longer be representing E11 after they mutually agreed to split.

“I am sorry to my fans, friends, family and Eleven Gaming for the events that have transpired over the last three days,” he said. “This is simply too much for anyone to take and because of the comments that were made against me, I have decided to mutually part ways with Eleven Gaming.”

The Norwegian maintained his innocence stating that he “is not a racist” and that anyone who knows him anyone close to him would know that. 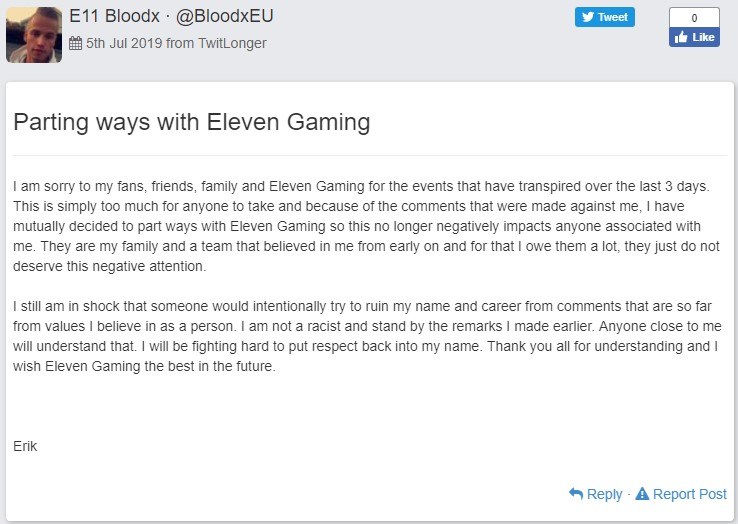 Bloodx vowed to bounce back from the incident.

As the proof was a screenshot from a Discord message, players in the competitive community were quick to point out that such a response could have easily been faked.

However, others claimed that Issa had no reason to create a fake message just to win an argument over aim assist, with Issa himself revealing he created a folder for ‘if they switch up’.

im so fucking done HAHAHAHH the amount of times he said it in a call, ive got so many pros that can back this ahhahahaahahah do i rlly have to expose him more?

Bloodx vowed to do everything in his power to regain respect in the community, after facing criticism on social media.

It wouldn’t be the first time that a player has recovered from serious allegations against them after Danny ‘Dubs’ Walsh was accused of cheating during World Cup qualifiers, only to prove himself innocent and later join FaZe Clan as a favorite for the tournament itself.