Epic Games’ Co-Founder and Vice-President, Mark Rein, has responded after he was criticized as “out of touch”, amid ongoing anger surrounding the BRUTE mech in Fortnite.

Since the start of its tenth season, Epic Games’ battle royale has been widely criticized for the implementation of BRUTE mechs. However, on August 15, Epic Games provided an update regarding their ‘Fortnite Philosophy’.

The update essentially explained that they are trying to create a gaming environment in which anyone can achieve a victory royale. This led to further backlash from the community, some of which was aimed at Rein, particularly after it was noticed he liked a tweet which said Epic Games “has no obligation” to listen to the community. 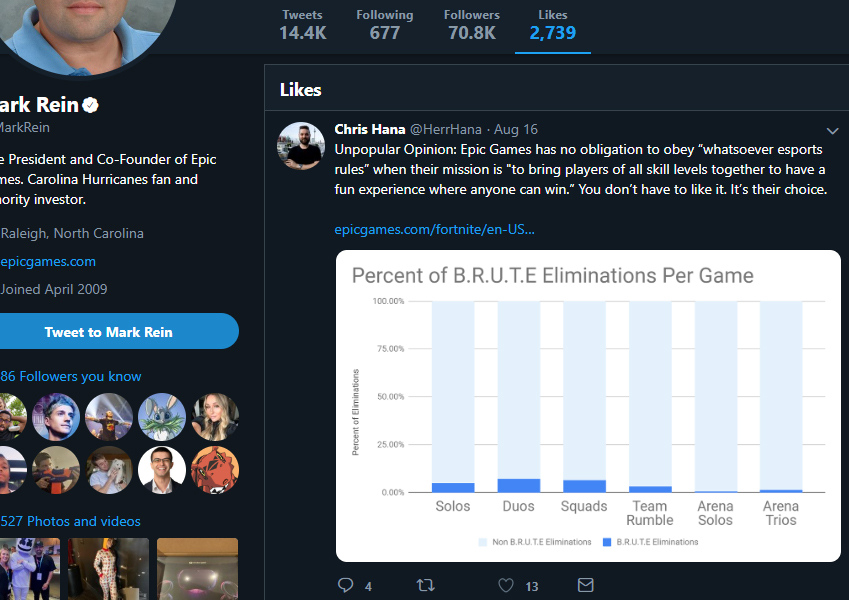 The tweet Rein liked stated that Epic had “no obligation to obey” what the community wants.
[ad name=”article2″]

Professional Fortnite player for Overtime, Pacifist, replied to Cowboy’s tweet, stating that: “He’s a super nice guy and down to earth. Met him at WC. Sadly he’s out of touch with what the competitive scene needs in order to thrive.”

Cowboy then responded that “no one who is pro mech is a nice guy”.

However, Rein seemed to take issue with this exchange, explaining that just because he liked the tweet does not mean he is “pro mech”, nor an advocate of ignoring the community.

Ima say something stupid and go out on a limb here; no one who is pro mech is a nice guy.

I use the like button on twitter as a bookmark to be able to remember and easily find things. It does not mean I agree or disagree with the thing I liked but simply that I wanted to reference it later.

“I use the like button on twitter as a bookmark to be able to remember and easily find things,” he responded. “It does not mean I agree or disagree with the thing I liked but simply that I wanted to reference it later.”

Rein’s point is a fair one, given that a ‘like’ on Twitter does not necessarily indicate agreement, although it is typical.

However, more cynical community members are unlikely to buy Rein’s response, as Epic’s VP was never going to stand by a tweet that essentially advocated for ignoring the community.

The BRUTEs were added to give lower skilled players a chance of achieving victory royales.
[ad name=”article4″]

It’s fair to say that the Fortnite community is up in arms about the mechs, and want to see a significant nerf, or even their complete removal.

Epic appear to be standing strong and rejecting all community accusations that they are “killing” their game, as some Fortnite creators have suggested.

You can stay up to date with all the latest from Fortnite Season X, right here on Dexerto.