Epic Games have hinted at “unbelievable things” coming to Fortnite: Chapter 2 in the future – leaving fans wondering what this could mean.

Fortnite has always had a certain strength in retaining players with brand new content, regular updates, and exciting changes, and it looks like they’re nowhere near done yet.

Responding to complaints of server and lag issues within the game, a member of the Live Operations team decided to explain what Epic will be doing to address it – and offered a little more, too.

The introduction of Chapter 2, Season 2 has seen some players facing more connection issues than before.

The original Reddit post addressed the fact that many people are reporting issues with ping and latency since the start of Season 2, asking what Epic Games can or will do to fix it, or whether they’re even aware of it in the first place.

Epic Games employee JShredz responded to the post explaining how exactly their servers work, saying that “always looking to improve the experience” for players, particularly where it pertains to server code performance.

Towards the end of the comment, which went into a lot of detail about the servers, Shredz added that as wells as new additions like the Choppa, they’ve “got some unbelievable things in store for the future.” This immediately got players talking and asking questions. 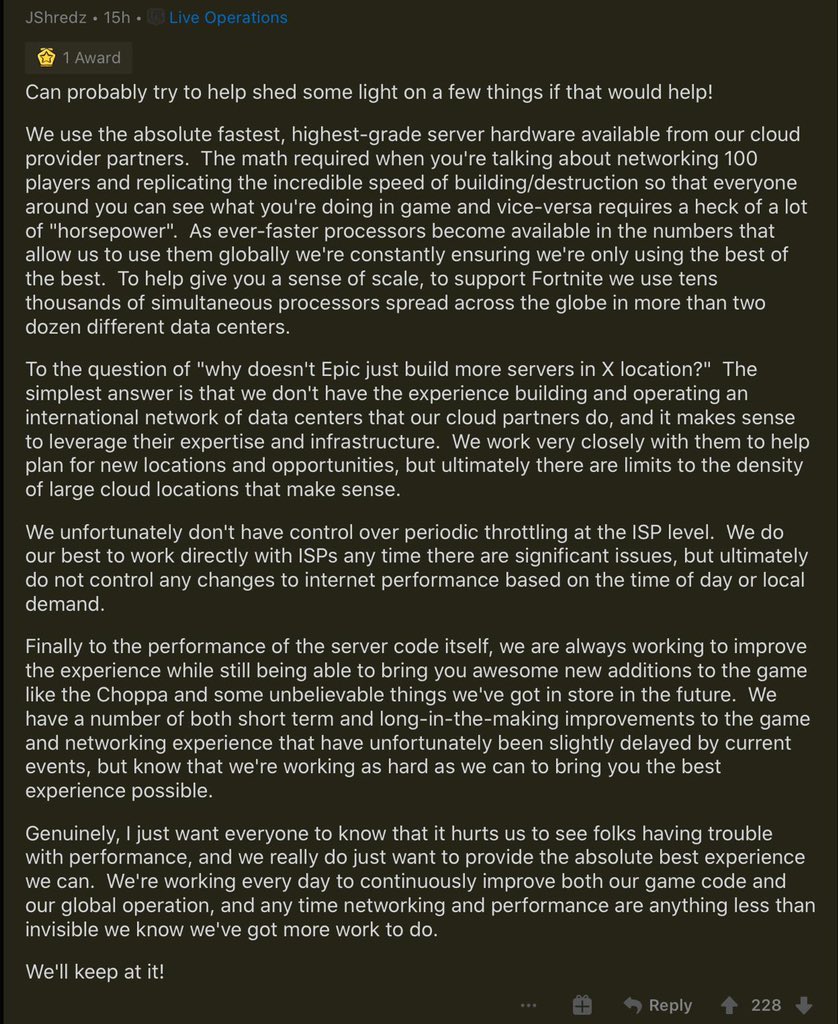 Of course, given the fact that the entire post was about server issues, it’s fair to assume that Epic has something big in the works to help improve performance and give players a more fair and enjoyable environment through that. But it seems to hint at something even grander.

What could Epic Games be planning for Fortnite?

Fortnite has had some of the biggest collaborations and activations we’ve ever seen in video games. The ongoing Deadpool challenges are a testament to Epic’s well-orchestrated relationship with Marvel, of which they have done many brand activations, so it’s possible that we see more Marvel – and possibly other big film franchises – arrive in Fortnite in the future.

There are also the leaked Travis Scott skins, which would make the U.S. rapper only the second person to get their own skins in Fortnite – behind Mixer star Tyler ‘Ninja’ Blevins. Could Fortnite be collaborating with even more big-name celebrities in the near future?

Thanos’ introduction to Fortnite in May 2018 was an unprecedented step forward for the game.

The phrase “unbelievable things” is one that could quite easily be attributed to some of the things Fortnite has done in the past, but it definitely raises some questions over how big exactly they’re able to go – implying it’s possible that they’ve hardly even scratched the surface so far.

What exactly these things are remains to be seen, but if one thing is clear, it’s that Fortnite players still have a lot to look forward to.