On August 14, Epic announced that the Gunner Pet will removed from players’ inventories moving forward, and anyone who purchased the cosmetic will receive a full refund.

In fact, almost uncharacteristically, they also apologized for having put the item up for sale in the first place, and have promised players an additional 200 V-Bucks of compensation as a sign of goodwill.

“We should not have released the Gunner Pet and apologize for doing so,” they tweeted. “Within the next couple of days, all purchases of Gunner will be refunded for the full amount of 1000 V-bucks as well as an additional 200 V-bucks and the Pet will be removed from the Locker”

Furthermore, those who purchased the item but used a Refund Token to return it will also receive the compensation, as well as another Token for future use.

“Anyone who purchased Gunner and refunds it prior to this make-good will instead receive 200 V-bucks and a replacement Refund Token that can be put towards any eligible items that were purchased within the past 30 days.”

Anyone who purchased Gunner and refunds it prior to this make-good will instead receive 200 V-bucks and a replacement Refund Token that can be put towards any eligible items that were purchased within the past 30 days.

Released in the August 13-14 Item Shop, the Gunner Pet instantly fell under extreme scrutiny and criticism from many in the community who felt that Epic were trying to rip off players.

The item, which cost 1,000 V-Bucks, was very similar to the Bonesy Pet offered to those who reached at least Tier 12 of the Season 6 Battle Pass.

In fact, the only noticeable difference between the two cosmetics was that Gunner had a light fur complexion than Bonesy. Otherwise, the two pets looked identical. 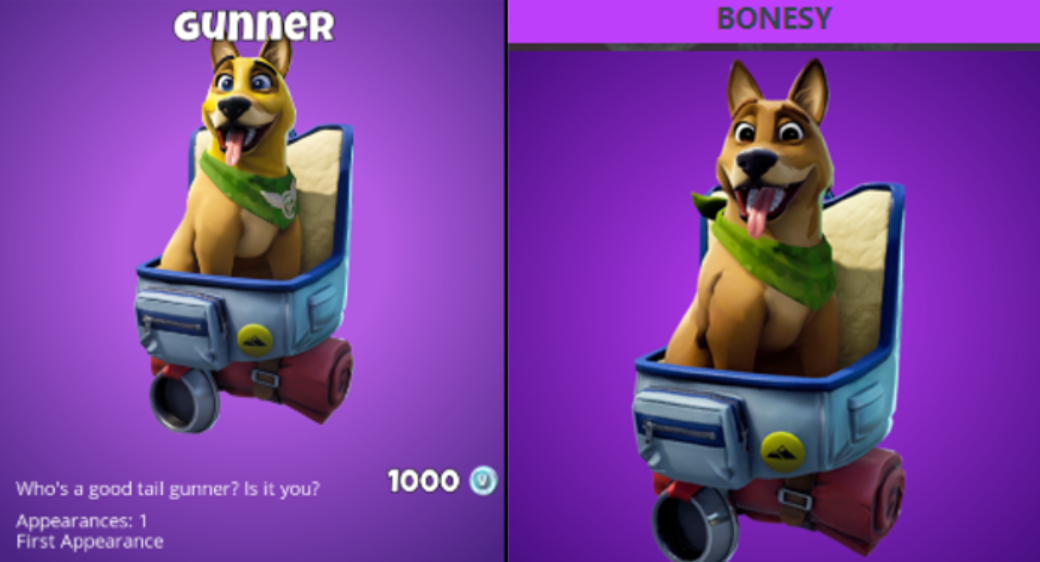 This, predictably, led to a lot of outrage from players, which did not think it was right for Epic to charge such a hefty price for an item that was once available for free.

“Wow they’re actually selling a literal recolor of an old battle pass item for $10,” wrote Reddit user ‘King_D3D3D3.’ “Not even a new model at all.”

“This is a massive red flag for me,” added ‘Tolbana,’ “At what point does the difference become minuscule enough for people to understand? Back when Skull Trooper was controversial many argued ‘It’s not BP so it’s fine!’ Now look how the goal posts have moved.”

Fortunately for players, Epic have decided to remove and refund the item, which otherwise would have meant setting a dangerous precedent that would open the door for them to recycle old Battle Pass items through the Item Shop for further profit.