The British company officially announced the item on Saturday, March 2, posting a picture of the item on Twitter.

Along with the image, Cranium Apparel posted a statement telling female members of the gaming community to “get ready” saying: “It’s high time that we do something for the female gamers who receive so much backlash in the community. Stay strong, we respect you.”

Its high time that we do something for the female gamers who recieve so much backlash in the community!

While Cranium meant well with their latest release, it quickly became clear that the community was not happy with the way the dress had been marketed, immediately responding with criticism aimed at the company.

Esports host Eri Neeman told Cranium Apparel that the company had “shot themselves in the foot” with the tweet they had posted, saying that “saying that this dress gives female gamers identity is wrong and plain ignorant.”

You guys shot yourselves in the foot with how you posted.

Some might have gone for the apparel if you simply announced it but you saying that this dress gives female gamers identity is wrong and plain ignorant.

But at least you guys are taking the criticism constructively. 🙂

Another Twitter users questioned why the company had created a dress in the first place, saying: “We’re playing games, not going to cheerleading practice.”

When asked if any females were involved in the design and creation of the dress, Cranium confirmed that this had not been the case, but stated that they had conducted “preliminary research.” 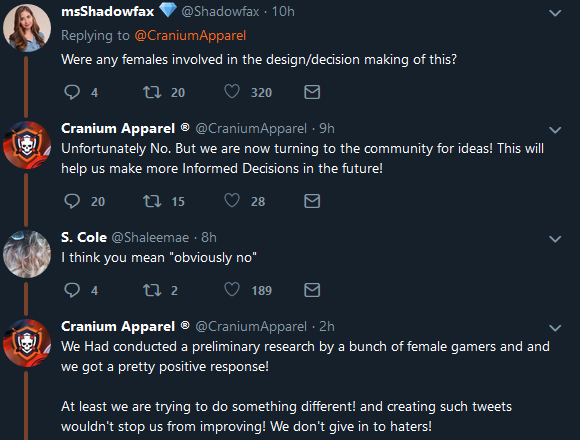 Cranium Apparel stated that no women had been involved in the creation of the dress.
[ad name=”article4″]

Another user asked the company to focus on items of clothing that people would actually want to buy, including jerseys and shirts cut for women, crop tops and leggings.

Thank you for your recommendations! Plus sizes are currently available in all our apparel! we are working On Women Fitted Jerseys & Leggings! You Should Be Expecting Them Any Time Soon! :yes:

Cranium Apparel confirmed that they would take the recommendations on board, and told potential customers to keep an eye out for new gear aimed at women which is set to drop in the near future.