ESPN’s ‘Esports64’ bracket is already merging worlds between people in different spaces of the industry as streamer Tyler1 and CoD pro Clayster have thrown light jabs in light of this year’s seeding.

ESPN kicked off their third consecutive bracket on March 26 to determine the most popular figure in esports, and the friendly competition is already heating up with numerous personalities.

During a broadcast on Twitch, Tyler1 was looking over the complete bracket for the 64 entrants this year, when he saw his name paired with eUnited’s Clayster which led to a hilarious reaction that sent Tyler to quickly lookup his opponent. 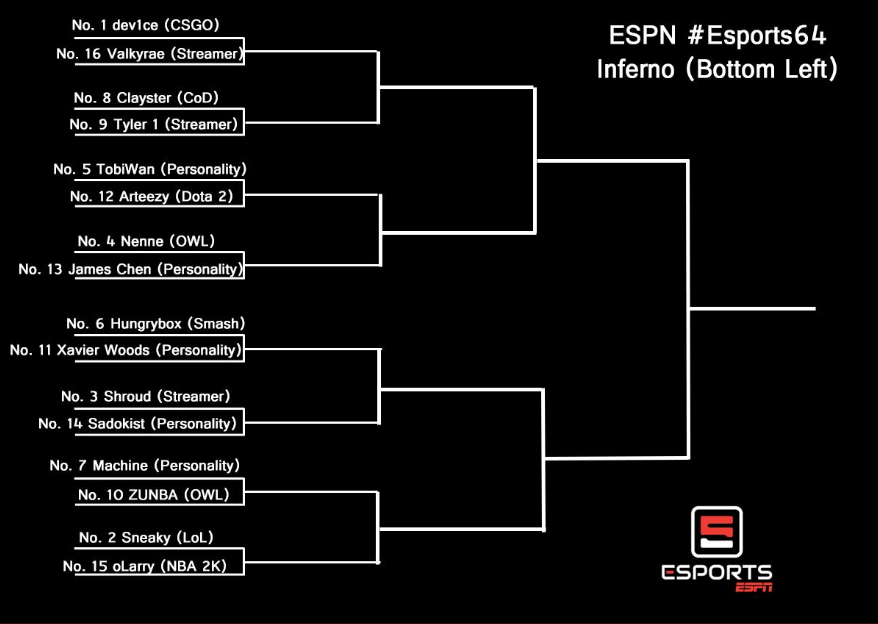 The Inferno bracket with T1 and Clayster.

At first, Tyler was dumbfounded to find he was seeded at the 9th spot in the Inferno division, but after coming to terms with the seeding his attention went straight to Clay.

“Who am I against,” Tyler said before seeing Clayster’s Twitter profile. “Who the f–, Who? Motherfucker is like 35 years old. The fuck you mean, who? Alright this better be a curbstomp, I’m not even fucking lying.”

After looking up his rival, the League of Legends streamer he called the matchup a “freebie” and was confident that he would be able to push past the 8th seeded Clay to make it to Round 2.

Tyler’s words reached Clayster who had a quick reply for T1 that seemed to be a callback for the popular meme that revolved around the “Reformed” streamer’s height, saying: “If I’m 35, [you’re] 4’5.”

Tame in its brevity, Clayster’s dig was met with hysterical reactions and was a suitable reply from one of CoD’s best trash-talkers.

ESPN formed a spicy match up when they put the two outspoken personalities together, and it’ll be fun to see where the good humor escalates when voting for the lower left bracket begins on March 27.