Superbad writer and actor Seth Rogen had the perfect response on Twitter to a story in the news about a student who actually tried to pull off a McLovin scam.

It’s been close to twelve years since Superbad first hit theaters, and is without a doubt one of the most influential comedies in the last decade. The raunchy teen comedy starred Jonah Hill and Michael Cera, and was a smash hit.

Seth Rogen had the perfect response to a student in Iowa who was arrested after attempting to pull off a scam with a fake ID that was featured in the movie.

One of the most iconic scenes in the film is when an underaged character named Fogell (played by Christopher Mintz-Plasse) devises a scheme to buy alcohol using a fake ID from Hawaii he obtained with the name ‘McLovin’ on it.

A twenty-year old man from Iowa actually tried to pull this off in real life, according to WSVN 7 News. After police were called, officers reportedly asked the student for his ID, to which he responded he didn’t have one. However, when his wallet was searched, police said they discovered a “fake Hawaii ID with the name ‘McLovin DOB 06/03/1981″, the outlet reported.

Replying to the news story on Twitter, writer and actor in Superbad, Seth Rogen, gave the perfect response.

“My work here is done,” he said, which sent his followers into a frenzy as many found the moment to be hilarious.

Stranger Things and IT actor Finn Wolfhard got in on the fun, and replied to Rogen’s tweet reciting a line from the film from when the character is asked why he chose “McLovin” for the ID card.

“It was between that and Muhammad,” he said. 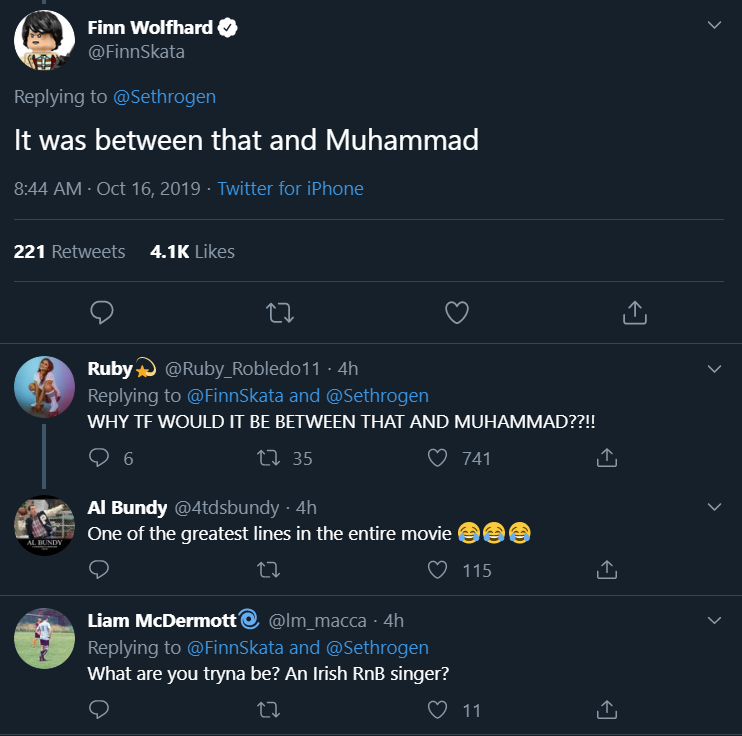 Set Rogen’s tweet has over 37,000 likes and 230,000 retweets as of the time of this article, as many Superbad fans have taken to the social media post to reminisce about the film, and cite their favorite lines.

Fans even began to spam McLovin gifs with scenes from the movie, proving that its legacy has endured over the last decade, as its popularity remains.

Superbad recently came to streaming service Netflix in September, and continues to be one of the most influential comedies from the 2000s.

The fact that an underage student actually tried to pull off a scam from the film is an example of why the movie is so popular, as it isn’t that far off from real life.