H3H3 snaps back at Trisha Paytas after receiving revealing pics

YouTube star Trisha Paytas sparked outrage after coming out as a transgender man on October 7 – but she isn’t done turning heads, later releasing a series of sensitive photos directed at another YouTuber.

Paytas shocked the net on October 12, posting a slew of highly sensitive pictures to Twitter in wake of the controversy surrounding her transgender announcement.

That’s not all: the YouTuber also tagged H3H3’s Ethan Klein in her post, seemingly in response to something he had said during an episode of his “H3 Podcast.”

Paytas’ antics didn’t go unnoticed by Klein, who posted a response to her photos in a Tweet shortly thereafter.

Rather than going into an all-out spiel, Klein merely gave a one-word reply to the shocking pictures: “Gross.”

“Can’t stop talking bout my *** ,” she continued. “You had the topic of my gen***ls in your mouth for 30 minutes on your podcast … Just educating you on what you’re talking ignorantly about over and over.” 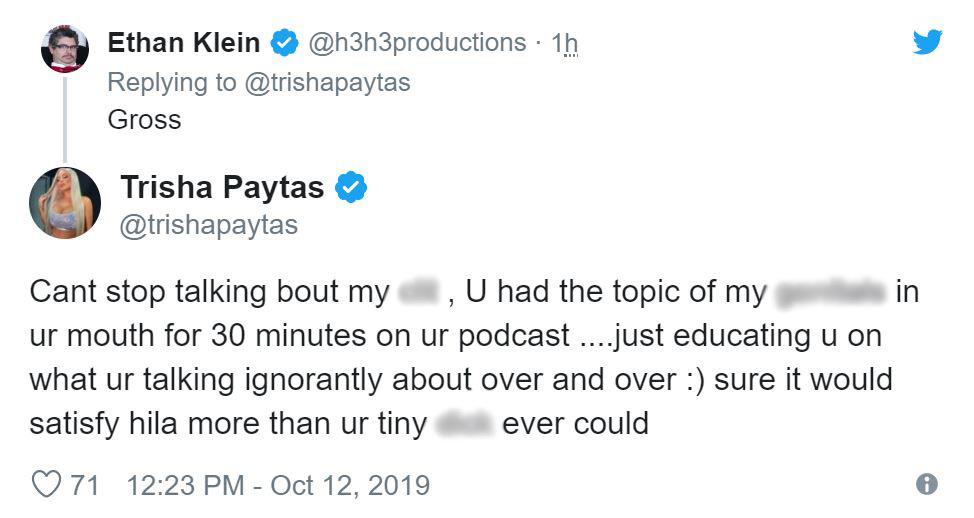 Paytas later uploaded a video discussing Klein’s comments in full, where she described him as “worse than Donald Trump.”

While Klein has yet to give Paytas a more verbose reply to her accusations, this wouldn’t be the first time the two YouTubers have had beef, by far: in fact, Klein had called out Paytas for photoshopping her pictures in early May, leading to an all out war between the two.

Needless to say, Paytas wasn’t impressed with his comments, calling his statement “predatory” and “harmful to young girls.”

Considering Paytas’ latest Twitter posts, it doesn’t look like things have gotten friendly between the YouTubers in the past five months – and with her comments on gender identity spurring backlash across social media, her sensitive photos are adding further fuel to the flames.

How to get coins in Pokemon Go: Earn free Pokecoins