Freakazoid is a veteran Counter-Strike player that has been playing professionally since 2010. He is best known for his time at Cloud9 in 2015-2016, where the team was the only American squad that could compete with the rest of the world.

In June 2019 his team, Ghost Gaming, broke up and he has been focusing on streaming CS:GO, as well as being an active member of the community. 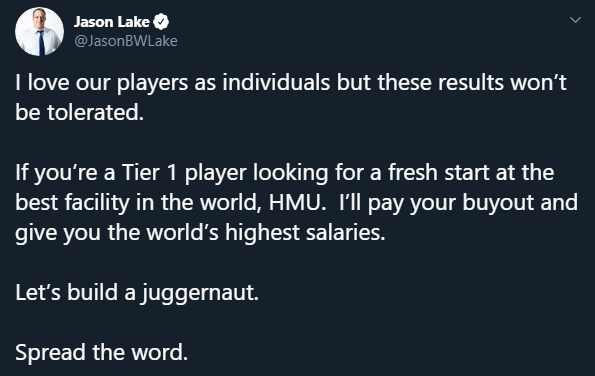 Jason’s tweet did not go down well with Freakazoid.
[ad name=”article2″]

On August 26 the American spoke about Jason Lake’s tweet, in which the Complexity CEO announced he is looking to build a new team, just minutes after the current squads’ elimination from the StarLadder Berlin Major.

“You’re never fucking going to get tier one players because they see a tweet like that and think, what would make me want to go and play for an owner that’s going to talk shit to somebody losing” said Freakazoid.

He then shook his head and added: “That’s embarrassing man. Aint anybody good playing for you… you’re silly man.”

Ryan was not impressed with Jason’s tweet and the way he treated his team, later adding “I think it’s fucking stupid. I think it’s silly you did the shit you did, you should never treat your players like that.”

Freakazoid also touched on Jason saying that he had talked to the team beforehand, and claimed it was “doubtful” he did, as the ex-Cloud9 star believes Jason does not respect his players.

Complexity’s future is uncertain as it has not yet been confirmed if the entire squad will be leaving or just a selection of players. However, they may be able to create an amazing squad, as players like Marcelo ‘coldzera’ David, Robin ‘flusha’ Rönnquist, and Aleksi ‘Aleksib’ Virolainen are all currently looking for a new home.