Professional esports league ELEAGUE and Call of Duty Endowment are partnering up for a Black Ops 4 charity event that will raise money and awareness for military veterans.

The event, which is being called Call of Duty: Black Ops 4 x ELEAGUE CODNATION Challenge for Vets, will take place on October 13 at 2 PM PT / 5 PM ET, and will be live-streamed on Twitch.

The challenge will feature 12 popular influencers from the CoD community, consisting a mix of content creators and pro players.

All of the participants will form three teams of five and face off in both the multiplayer and Blackout battle royale modes of the new game. The exact list of participants and the format of the challenge have not yet been revealed. 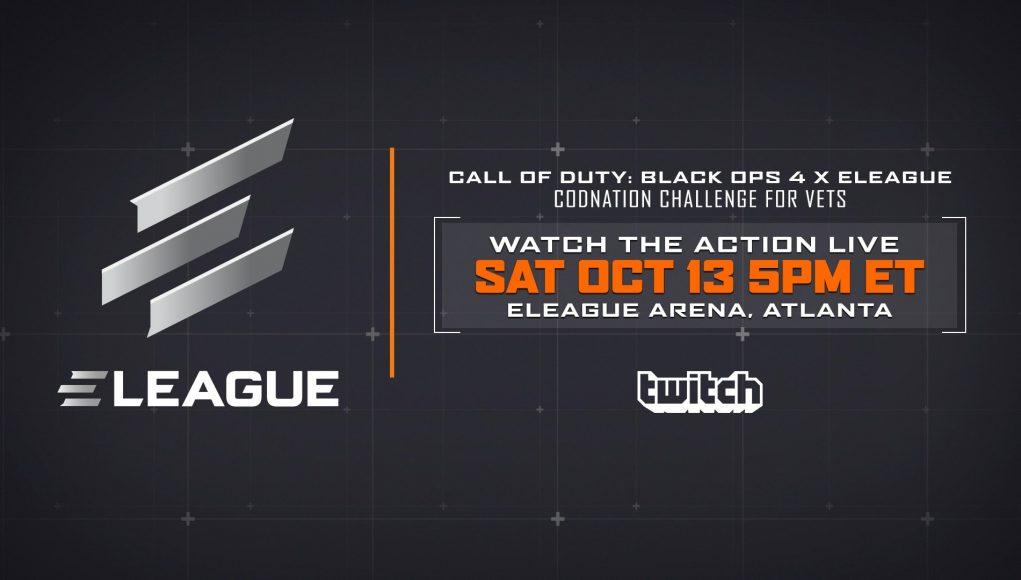 This exhibition challenge will be the closing event of Call of Duty Endowment’s three-day charity live-stream celebrating the release of Black Ops 4, with all of the proceeds going to charities that benefit veterans.

Fans will have several ways to watch and get involved with this event. Not only can they watch it live on Twitch, they can also view the best moments that will be featured in a three-part series that will air on TBS on October 26 at 8 PM PT / 11 PM ET.

Fans are also invited to attend the event, which will be held at the ELEAGUE Arena in Atlanta. Tickets to take part in the live studio audience will be free, and Turner Studios will offer on-site amenities that will include game-focused fan experience and free concessions.

The full press release from ELEAGUE for this charity event can be seen below:

Event to be Presented Live on Twitch with Best Moments Showcased in TBS Series Debuting Friday, Oct. 26, at 11 p.m. ET/PT

Turner & IMG’s ELEAGUE will feature Call of Duty®: Black Ops 4, the upcoming title from Activision’s Call of Duty series, as the culmination of the Call of Duty Endowment’s epic three-day charity livestream celebrating the game’s release. ELEAGUE’s fan-focused streaming event will pick up the action immediately after the close of the CODNATION Challenge livestream, which runs Thursday, Oct. 11, through Saturday, Oct. 13. Through this unique streaming event, ELEAGUE will showcase Black Ops 4 on the day immediately following its release.

The action-packed exhibition – Call of Duty: Black Ops 4 x ELEAGUE CODNATION Challenge for Vets – will be held at ELEAGUE Arena in Atlanta, Saturday, Oct. 13, beginning at 5 p.m. ET, with live coverage presented on Twitch. The event will feature 12 popular influencers from the Call of Duty community.

Players will form three teams of five and face off in several Black Ops 4 multiplayer games, highlighted by the anticipated “Blackout” battle royale mode. Each team will consist of a mix of community figures and professional Call of Duty players, with casters as captains.

Additionally, fans will be able to contribute to the Call of Duty Endowment, a non-profit organization that seeks to help veterans find high-quality careers, directly via the Twitch stream.

ELEAGUE will capture the event’s top moments for a three-part feature series premiering Friday, Oct. 26, at 11 p.m. ET/PT on TBS.

Attendee Information
Fans are invited to join the live studio audience at ELEAGUE Arena in Atlanta by obtaining free tickets here. On-site amenities at Turner Studios will include a game-focused fan experience and free concessions.

About ELEAGUE
ELEAGUE – formed in partnership between Turner and IMG – is a premium esports content and live tournament brand that has aligned with some of the most popular titles in the business through its first two years: Counter-Strike: Global Offensive – including the hosting of two Major Championships – Overwatch®, Call of Duty: Black Ops 4, Street Fighter® V: Arcade Edition, Dota 2, Injustice 2, Rocket League, Formula Eand TEKKEN® 7.  With a focus on innovative production capabilities, storytelling and exploring compelling narratives surrounding star teams and players, ELEAGUE has generated record levels of engagement with its content and positive reaction throughout the esports community since its launch in 2016.