The dramatic saga between the Excelerate Gaming esports organization and Call of Duty player Ethan ‘FA5TBALLA’ Wedgeworth continues to roll on as the player has responded to accusations made against him by members of the org.

On February 25, FA5TBALLA put out a message on Twitter in which he addressed the Reddit post that ExG’s General Manager Jay ‘j0rdinho’ Helton had put out about the CoD player following his demotion from their starting squad at the CWL Pro League.

The Reddit post was published by j0rdinho in order tell the team’s side of the story concerning the roster move, and in it he put the majority of the blame on FA5TBALLA, calling him “incredibly toxic and uncoachable,” and claiming that he “refused to listed to anyone but himself.”

This claim was pretty much backed up by the official statement that ExG put out via their own Twitter, in which they stated that the decision stemmed from the team and was carried out “based on their remarks regarding team atmosphere and overall cohesion.” 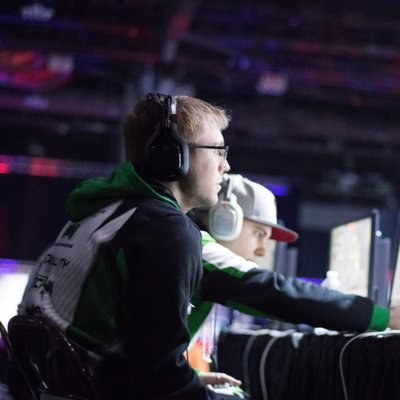 FA5TBALLA was emotional once again when describing how much time and dedication he had invested into become a Call of Duty pro player.

As expected, FA5TBALLA has challenged the accuracy of these statements, claiming that he and j0rdinho had never once spoken to each other and that the manager had never watched or listened in to any team scrims.

“The fact the he would go to Reddit and speak on business which he has little to no information about is ridiculous,” he wrote. “The fact that someone who’s never spoken a word with me made up such a statement is crazy.” 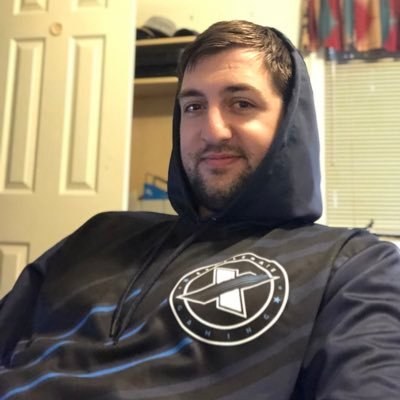 FA5TBALLA was surprised by the comments made by ExG manager Jay ‘j0rdinho’ Helton, claiming that the two had never once spoken.

He did go on to admit that the team chemistry may have not been optimal, but claimed that the lack of cohesion was not due to his actions but rather to the disrespect he was treated with by some of his teammates.

“Arguments would burst out and become extremely personal, so much to the point I was told ‘it’s actually embarrassing how bad you are’ and ‘every map we lost at the PLQ was your fault.’

“I put my hear and soul into achieving my dream and got it ripped away from me,” he went on. “Then I was told I was toxic and uncoachable and people believed it. I was treated with little to no respect by some of my teammates and it was honestly a depressing atmosphere.” 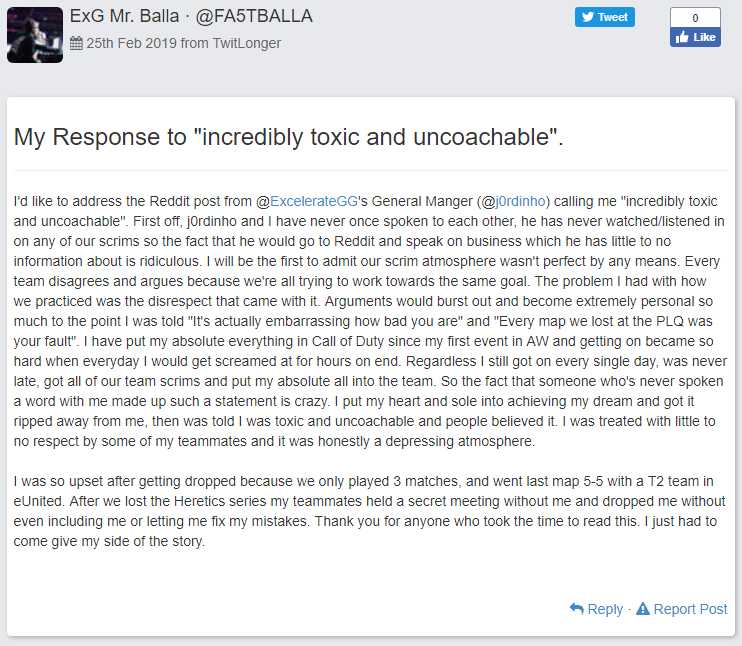 Of course, all of this stems from ExG’s roster move on February 23, which saw FA5TBALLA moved to the substitute’s role and former sub RobbieB being promoted to the starting squad.

This led to a whirlwind of controversy in the competitive CoD community, in which accusations were sent flying left and right while fans and pro players alike expressed their own judgments on social media.

Since then, FA5TBALLA has been accused of leaving a “parting gift” at the team’s Pro League apartments, clogging the toilet before he left for the airport.

Which side of the story do you believe more in regards to this controversial roster change and the accusations made in its aftermath? Share your thoughts with us by tweeting @DexertoINTEL!