Respawn Entertainment have given an update for the rising audio issues players have been experiencing throughout Apex Legends.

The studio launched their battle royale on February 4 and were welcomed by an incredible reception from fans. Since then multiple bugs have been reported throughout King’s Canyon and the team behind the game have been hard at work trying to resolve the more pressing issues.

One of those persistent problems have been the clunky or sometimes absent audio that comes in and out during firefights as well as when tons of people land around the same location, making the game difficult to play. 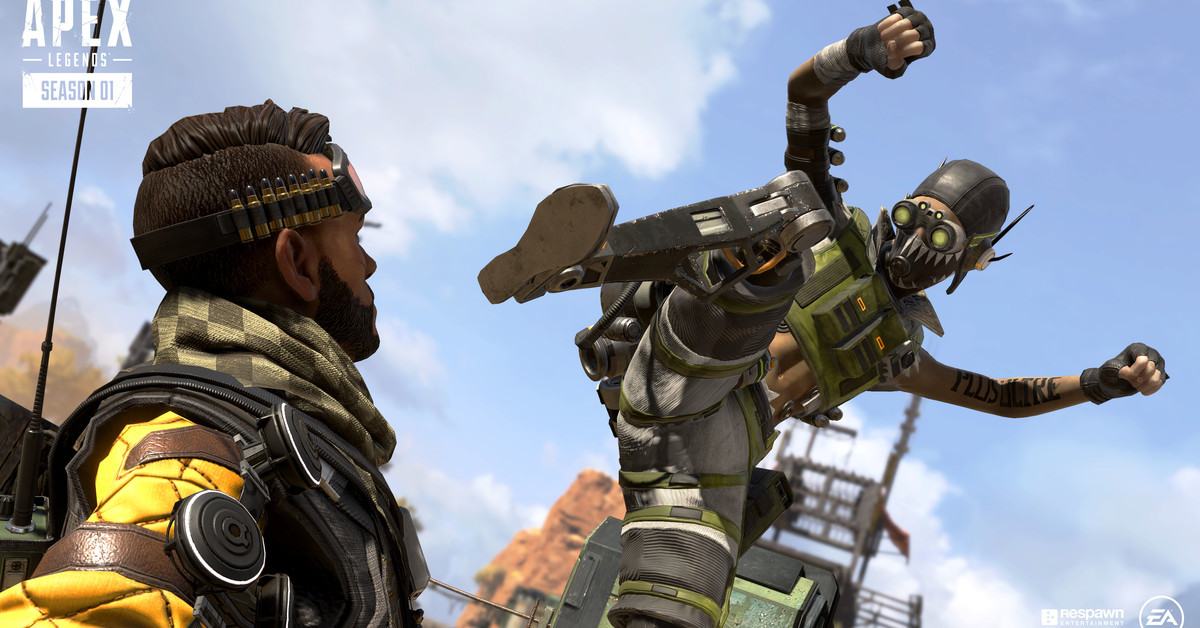 Respawn Entertainment have been looking for ways of taking care of all the bugs that have been cropping up since their last major update.

After the Respawn team addressed the problems PlayStation 4 players have been experiencing after the 1.08 update, Community Manager Jay ‘Jayfresh’ Frechette responded to a fan who laid out the think of the consistent sound problems.

“The game sfx audio was 100% when it launched,” Reddit user ‘SunnyXtreme83’ said. “But now it sometime tears up or completely unhearable specially when Skulltown is a hotzone and [the majority of players] drops there. The sound tears badly unabling us to hear anything no gunshots no footsteps and the game lags.”

For some time the Apex Legends community thought there developers must not have been the wiser about the consistent audio problems. But Jayfresh was quick to respond, saying: “Yep we are aware of that and audio team is on it. We’ll be talking more about what they’ll be addressing next week.”

The Respawn team also said they think they know what was causing the PS4 crashes. He pointed to “the “Pick Me Up” Banner Frames for Lifeline” that were trying to “call up a non-existent file.”

They have since issued a “partial fix live now disabling the Banner, [though] crashes may still occur when unlocking the Banner or equipping it and we’re continuing to work on fully resolving the issue,” according to the dev. 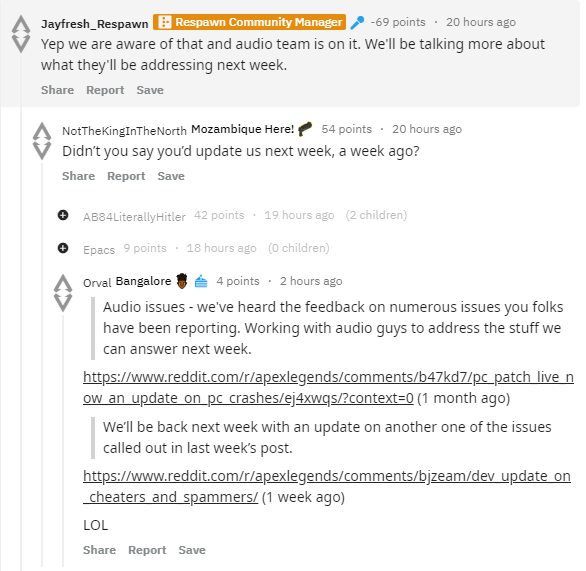 It seems like not a lot of fans were happy with the Respawn Community Manager’s response.

When will an Apex Legends update come out?

It didn’t seem like the Respawn community manager’s words were going to hold over impatient fans, as Jayfresh’s response was quickly downvoted with players saying they’ve been waiting for the devs to address it for weeks.

Players have been waiting for crucial fixes to come for the game’s audio problems and beyond. But there might have to be a bit more waiting as the devs work hard on putting out the small fires popping up here and there.

With reports of Respawn Entertainment announcing more details on Season 2 during the E3 conference, one could imagine that the devs would want their game as polished as possible before hitting the stage floor.

The Apex Legends community is starved for solutions to the growing amount of bugs found throughout King’s Canyon, and Respawn is sure to make them priority in the near future.