Respawn Entertainment have officially released the full trailer for Apex Legends Season 5, giving fans a look at upcoming character Loba as she hunts for Revenant, the Synthetic Nightmare who killed her family.

As always, a new season of Apex Legends brings a brand-new character for players to sink their teeth into, and for Season 5 Respawn have decided to go with Loba, a character who has been mentioned in the game’s files for most of its lifespan, but had never officially made an appearance inside the battle royale.

That all changed with the release of the first Season 5 teaser back on April 30, ‘Legacy of a Thief,’ and since Loba has been spotted in the game’s menus, seemingly keeping an eye on what’s going on around King’s Canyon as the game prepares for her imminent arrival to the game.

Loba will finally join Apex Legends on May 12.

The storyline between Revenant and Loba actually dates back to Season 4 and the introduction of the simulacrum, who was seen murdering an entire family after realizing that Hammond Robotics and the Syndicate had turned him into a robot. Only one member of the family was spared, a young girl who watched the entire incident unfold, and grew up to become Loba, now determined to take down Revenant once and for all, and avenge her family who he brutally murdered.

Throughout the early Season 5 teasers, Loba has been hunting down the machine, following him to Kings Canyon where he’s been sent while they try to figure out how to deactivate him permanently.

The trailer ends with Loba facing off against her nemesis, but as she’s joining the games, is putting off her revenge for a bit. After all, they might need to be on the same team somehow. The trailer also appeared to show some significant map changes, with what looks like the destruction of Skulltown.

In the trailer, we finally get a look at what she is capable of in the Apex Games. Like the leaks suggested, she will be able to teleport, using her special tool.

Another ability shows her stealing a weapon from an enemy, seemingly also using the teleport ability. We don’t know yet, officially anyway, which is her ultimate and which is her tactical ability.

These line-up with the leaked abilities:

What else is coming in Apex Legends Season 5?

One of the biggest additions in Season 5 is the introduction of Quests, which will act as a new way for players to earn rewards. The official description from Respawn says that players will “hunt for treasure and answers,” with a mysterious promise of rich rewards for those who are successful.

How exactly these Quests will work remains unknown, but it’s expected that they will run throughout the season, giving Apex players an overarching objective to work towards over the coming months. 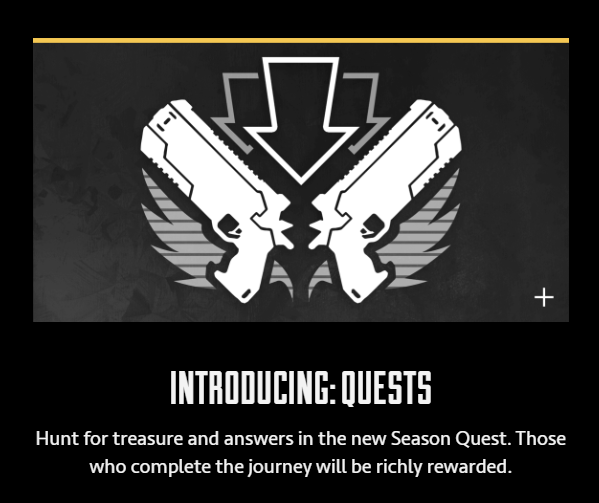 A new Battle Bass for Season 5: Fortune’s Favor will also be added, with 100 items including Legendary character and weapon skins, Apex Packs, and other cosmetic items up for grabs to those who choose to purchase it.

Respawn also teased that “new Battle Pass content” would also be making a debut this season, but what that could be remains unknown.

A new season means a new Ranked Series, which will be the fourth running of the game’s competitive playlist, designed to test your skills and see where you rank among other competitors.

Just like last season, the Ranked Series will be split in half, with the action shifting from World’s End back to Kings Canyon at some point in the next few months.

Apex Legends Season 5 will be available on PC, Xbox One, and PS4 on Tuesday, May 12.