There are a lot of secret spots and glitched areas in Apex Legends’ new Firing Range training area, and players have found many of them in their search for the mysterious Season 3 easter egg.

The recently-released Firing Range is a massively-revamped version of the previous training area in Apex Legends, as it includes many new options for players looking to practice.

It also features a variety of hard-to-get-to secret areas, like the Dropship, as well as a supposedly massive easter egg that the developers teased in their November 27 Devstream.

Players have spent countless hours in search of it, and although no one has found it yet, they have stumbled across some of those unknown parts of the map.

Most of those spots are difficult to reach, either because Respawn placed them that way intentionally or they’re glitched and require a specific process to get into.

Aside from being a great training area, the new Firing Range features a lot of secrets.

How to glitch outside of the map in Firing Range

In order to reach most of the hidden areas in Firing Range, you must first glitch yourself outside of the map. To do this, you must walk into the entrance chamber that you load into at the start of your session.

On the right side of the chamber, where the rock wall meets the pathway to outside, there is a corner you must climb into and follow these steps: 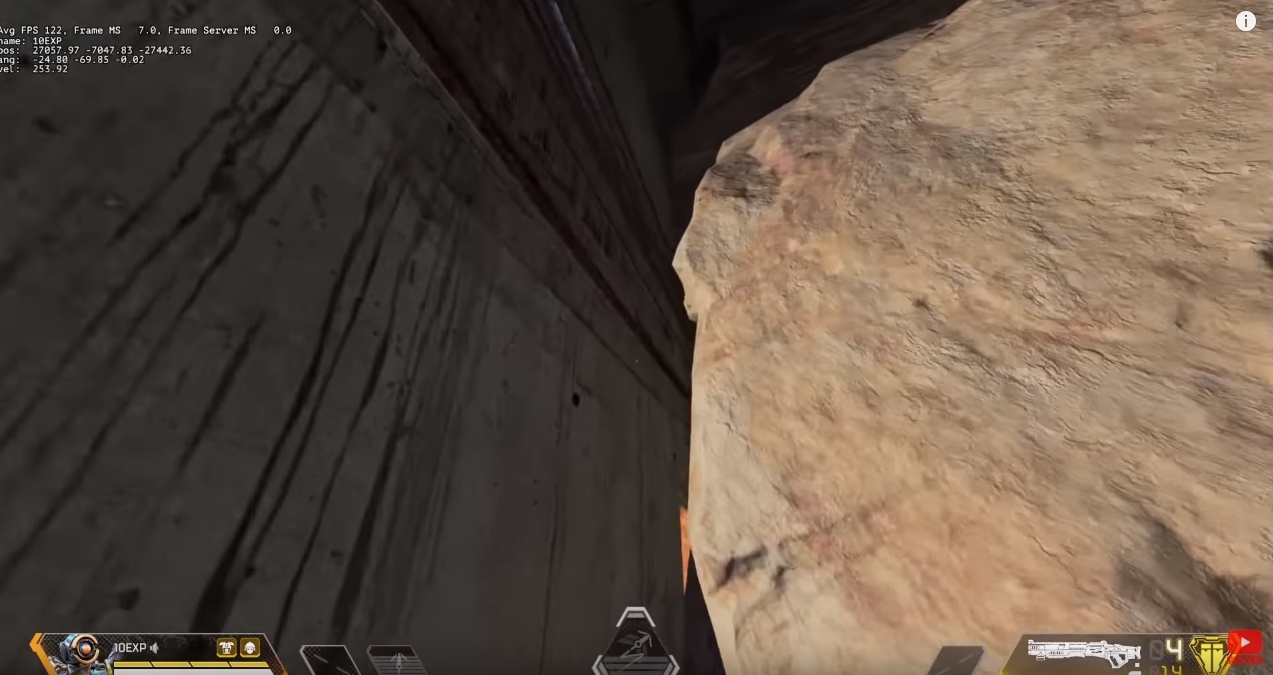 The right corner of the entrance room where the rock wall meets the exit arch is where you can glitch out of the map.

How to get into the Dropship outside of Firing Range

One of the most interesting things to visit outside of the Firing Range map is the parked Dropship that carries all players over World’s Edge at the start of every match.

Getting to the Dropship isn’t easy. You must first drop into the water and run a long way to another rock island and begin climbing up, which involves a lot of calculating.

Using Pathfinder is essential to the climbing process, and it’s recommended that you also carry a lot of Ultimate Accelerants to keep regenerating your Zipline Ultimate Ability as well as a sniper rifle to be able to see farther away.

Once you’ve finished the climb, the Dropship will there to greet you at the top, and you will be able to see the inside of it by switching to Crypto and using his drone.

Interestingly enough, the developers made the inside of this version of the Dropship very detailed with a high-quality design, despite the fact that players aren’t even supposed to reach it (technically). For whatever reason, the interior of the Dropship was designed with a lot of attention to detail.

For an in-depth video about all of these glitched secret areas and detailed steps on how to reach them, you can check out the video below, courtesy of popular Apex YouTuber ‘The Gaming Merchant.’

There are some who believe that the Dropship is the easter egg that the developers have teased, seeing how so much effort was put into making it very detailed inside.

However, most think it’s too simple to be THE easter egg, especially since it really doesn’t hint at anything or serve any purpose, so the hunt for the biggest secret in Firing Range rolls on.