An Apex Legends player has explained why Kings Canyon seemingly has limited loot compared to when fans were dropping into the original map back in season one.

With the start of Apex Legends season four, Respawn Entertainment finally introduced Revenant to the Apex Games and dropped a handful of map changes to World’s Edge. Though, one of the other big things that got fans excited was the return of Kings Canyon in its original form.

The first map that the popular battle royale title used was confirmed as returning as a part of the new ranked splits – where players would play both World’s Edge and Kings Canyon. Though, it was introduced ahead of time in unranked matches for a limited time. However, the much-loved map has faced some criticism about its loot and not being as enjoyable as its replacement.

Many Apex Legends had called for the return of Kings Canyon.

In the face of those complaints, some fans have defended the classic map, with Reddit user Ozqo giving some analysis on why the map seemingly has limited loot compared to World’s Edge.

They explained that when fans first entered Kings Canyon, they would usually just need a Wingman to wreak havoc on enemy players and because you didn’t need a tonne of ammo, you never felt like you were running low. However, new things have been added that impacts the loot pool.

“This is the first time we’re seeing sniper ammo on Kings Canyon. Those sniper ammo stacks and extended mags are taking up spots that could’ve otherwise gone to more useful items – this puts additional strain on the loot,” the Redditor noted. 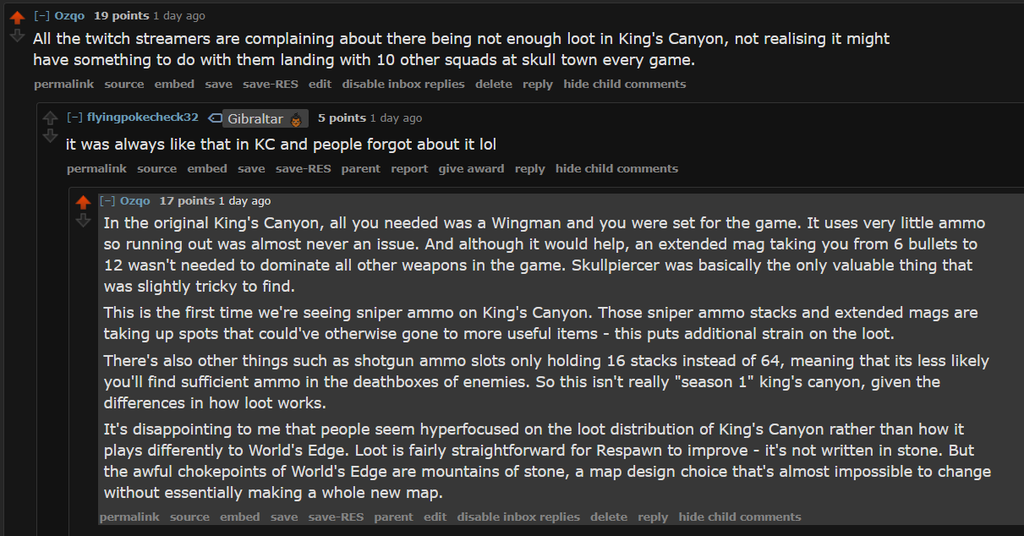 Ozqo also claimed that the map “isn’t really ‘season 1′ Kings Canyon given the differences in how loot works,” though the locations on the map might be the exact same.

Whether or not Respawn takes the feedback on board for when Kings Canyon returns as a ranked mode map remains to be seen, but it appears as if fans would like to see some tweaks.