Concept art is often used to promote games or in Apex Legends‘ case, its latest chapter, Season 2. Respawn Entertainment have now shared some concept art which you may not have seen before.

The new concept art was highlighted in Respawn’s most recent Reddit check-in – a semi-regular post to update Apex Legends players with the latest happenings within the game.

Art showing off changes to Kings Canyon and the new legend Wattson can be seen throughout Apex Legends media. Some of this art wouldn’t have been used though, being relegated to the artist’s personal profiles. Fortunately, these have now been shared for players to get an idea of what the process is like when adding elements to the game. 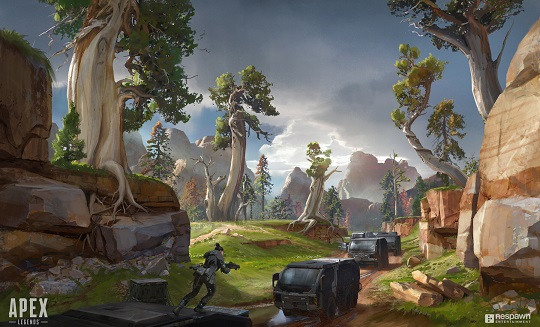 “When new content comes out in the game, artists will often post the work they did and it’s a great way to see concepts of things in the live game and high res of skins or weapons they worked on,” Respawn’s Community Manager posted.

Three Concept Artists were highlighted – Liam MacDonald, Cliff Childs and Danny Gardner – their work can be seen on Art Station by clicking their respective names. 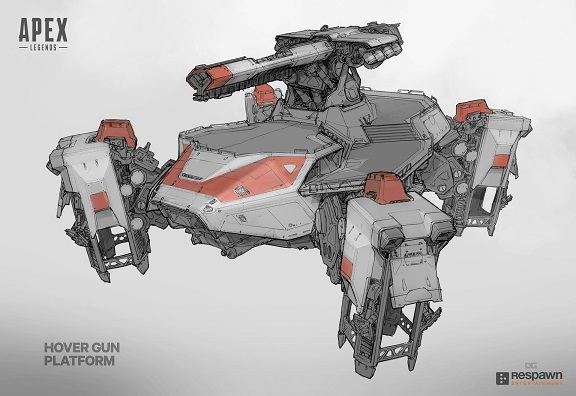 A concept design of a hover-gun on a Supply Ship…

One of the most fierce pieces of art is Caustic surrounded by his toxic gas. While deadly, its vibrant yellow color makes it look anything but in this instance. If you look closely you’ll see just how poisonous it can be for his victims.

Another interesting bit of art by Cliff Childs shows off King’s Canyon in a more cartoonish setting. The reimagined setting shows what Apex Legends may look like if it were built in the style of Fortnite.

Elsewhere, Danny Gardner’s work seems to be focused on the machinery in the game rather than the environment or characters. One interesting design shows the idea of adding a hover-gun to a Supply Ship. Quite how this would work and how powerful it would be, will have to be left for your imagination, for now.

Apex Legends Season 2 is now well underway but who knows what interesting ideas and concepts will come about in the future.