Finding and gearing up with the best loot in Apex Legends will often make a difference between winning and losing, and there’s a great tool that shows you where to find the best loot on the map.

The way loot distribution works in the game is different locations have different amounts of each tier of loot (high, mid, and low). When players traverse into a certain named area on the map, they will be greeted with an on-screen message that lets them know what kind of loot can be found there.

In order to help fellow players, a devoted Apex Legends fan has created an interactive online map that indicates which locations have the best chances of containing the highest quality loot.

According to the map, the best locations to land at for loot are Artillery, Relay, Swamps, Repulsor, Water Treatment, Thunderdome, Airbase, Runoff, The Pit, and Bunker.

Now, players aren’t guaranteed to find the best loot here, but each of these locations have at least an 86% chance of having high tier loot, with some going as high as 92% 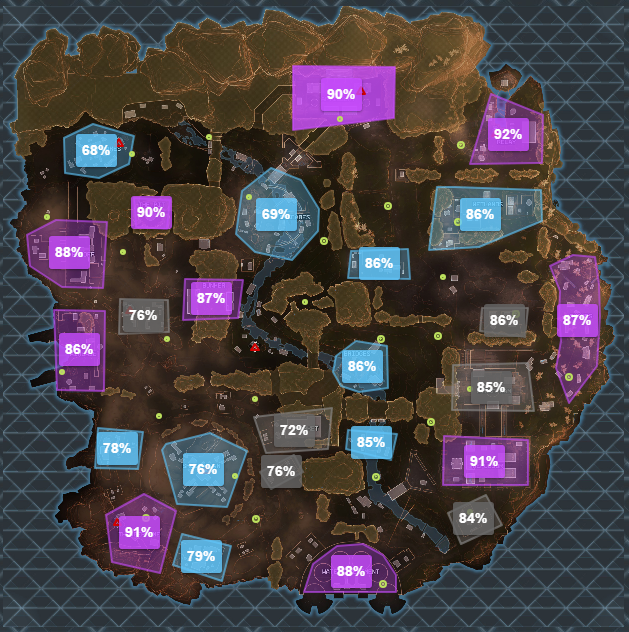 It shouldn’t come as a surprise that most of the locations that have the best odds of featuring high tier loot are located towards the edges of the map.

This is because landing at such locations presents a greater risk of being on the opposite end of the safe zone, while landing in the middle means you’re always relatively close to the next circle.

The interactive map, of course, also shows which locations have higher chances of featuring mid and low tier loot. To check out these locations and all of their loot percentages, feel free to visit the interactive Apex Legends Map website.

The manner with which the website has been built and operates is quite remarkable, as the information presented is based on community feedback.

Players who visit locations and make note of the loot quality can then go to the website and input that for the specific location. As time progresses and more players contribute their feedback, the data presented will become more a precise and reliable.