Apex Legends‘ Season 1 battle pass has not been officially unveiled yet, but data miners have been digging through the game files and discovered new assets relating to the battle pass.

These leaked files give us an indication of what the battle pass will include, but there are no image assets associated currently – only file names.

The first set of files, shared by data miner @RealApexLeaks, show a number of files which have been found since the latest update, which are preparing the game itself for the battle pass launch – such as a ‘purchase’ button, and ‘reward’ button. 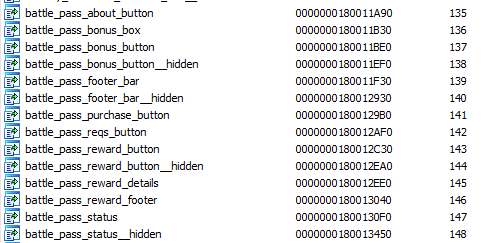 As for what the battle pass contains, as expected there will be character skins, confirmed with another game file found by the data miner.

There is also a ‘battle pass bonus’, although what exactly this bonus entails is unclear. Potentially this could be bonus XP, or perhaps bonus Apex Packs to be opened.

A ‘bonus’ of some kind appears to be part of the battle pass.
[ad name=”article3″]

It also looks like there will be a new lobby section added to Apex Legends specifically for the battle pass, what exactly it will contain is unclear though.

For the battle pass rewards, one game file describes a ‘free_icon’, and another is less clear, called ‘details_box_indicator’.

Finally, there is a ‘battle pass status’, which possibly differentiates between a free or paid version of the battle pass. The only ‘status’ level found in the game files by the data miner was ‘diamond’.

As with all leaks, it must be noted that everything is subject to change, and Respawn could still be developing the entire battle pass – which could lead to new additions and removals from the game files.

On March 6, Respawn said they “still have work to do to get everything ready” for Season 1, and asked players for patience.