A sudden change to the dates for Overwatch Competitive Season 17 has players speculating about the introduction of a role queue in the near future.

With the Overwatch League now looking almost certain to introduce a role lock for Stage 4 and beyond, players have been speculating that a role queue system could also be on its way for the broader game, and a sudden change to the Competitive season dates could hint at a timeframe for the feature’s release.

On July 16, players noticed that the in-game counter to the end of Competitive Season 17 had dropped significantly, showing that the season is now apparently due to end in just 27 days’ time. 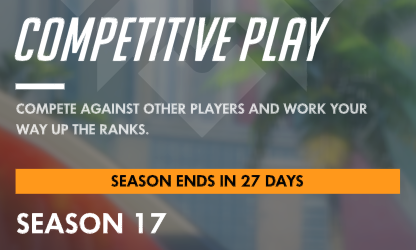 The in-game counter now shows the season ending much sooner than expected.

The change appears to take weeks off the anticipated duration of Season 17, which was originally expected to finish at the end of August. Instead, it now appears set to end weeks earlier around August 12.

With the season having begun on June 30, assuming the in-game counter is accurate and the change isn’t a bug, Season 17 is set to be significantly shorter than the typical two months for most competitive seasons.

Many fans have taken the sudden change as an indication that Blizzard could be planning to implement a role queue for the next competitive season, and have adjusted the current season’s dates to line up with when the feature is due to go live.

What is role queue?

A role queue would allow players to queue up to specifically play as a Tank, Support, or DPS, and then lock them into that role for the duration of the game. It would also mean players could have a separate ranking for each role, so it would make sense that if Blizzard are going to implement such a change that it would need to start with a new competitive season.

If a role queue is indeed to be added in time for competitive season 18, however, Blizzard will likely need to announce the feature fairly soon, as something as big as a role queue system will almost certainly need to spend several weeks in testing on the Overwatch PTR before hitting the live servers.

Blizzard have yet to even officially confirm that the Overwatch League will be implementing a role lock, however, so it very much remains to be seen whether a role queue could be appearing in-game so soon.