OpTic Gaming’s Nick ‘MaNiaC’ Kershner has announced that he will be returning to competitive Halo as Excelerate Gaming’s new coach.

Kershner will be reunited with former Believe The Hype teammate Daniel ‘Demon D’ Yakovleff and long-time friend Aaron ‘Ace’ Elam, who MaNiaC said he “would have to be with” if he was to ever “touch the mainstage again”.

He will also be working with two of Halo’s rising stars – former eLevate player Uriah ‘Artic’ Legorreta and Jesse ‘Bubu Dubu’ Moeller, who finished third at the 2018 Halo World Championship with Team Envy. 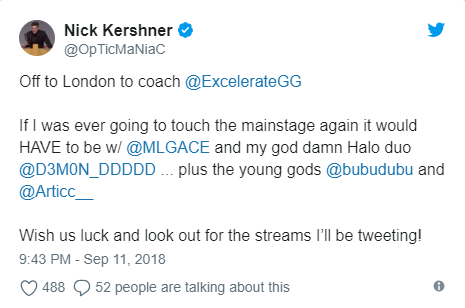 MaNiaC will begin his coaching duties on Friday, September 14 as Excelerate fly out to London to compete in the Halo Championship Series event, which takes place at the Gfinity Arena.

The 27-year-old last appeared at a Halo event back in 2016, when he competed as part of an OpTic squad that finished 9-16th at the North American Regional Qualifier for the Halo World Championship.

Since he retired from playing professional Halo, MaNiaC has focused on content creation, regularly streaming Fortnite gameplay on his Twitch account. He has become one of the most popular members of the OpTic organization, garnering over 200,000 subscribers on YouTube, and appearing in numerous videos on OpTic Gaming’s YouTube channel.

Excelerate Gaming have been drawn in Group B at HCS London, and will take on Radiance Esports and TOX Gaming when the action begins on September 14.