Leaked information about Fortnite Battle Royale’s soon-to-be-added “Grappler” seems to confirm the rarity of the item and how many uses players will get out of it.

According to well-known @FNBRLeaks data mining account on Twitter, the Grappler will have a total of 15 uses and only be available in the Epic (purple) variant.

It also looks like players won’t be able to pick up more ammo for the movement-based item, with @FNBRLeaks saying that the item will “break” after 15 shots: 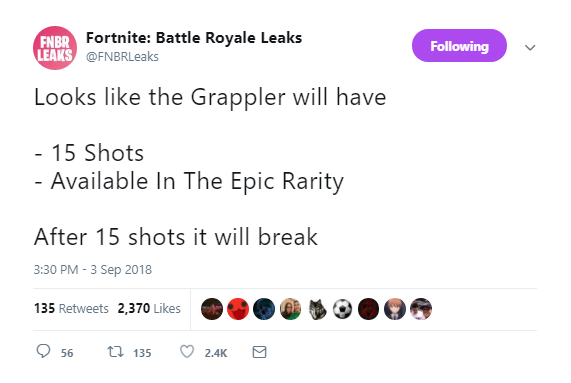 The Grappler’s official on-stream reveal at PAX West 2018 confirmed the belief that it would work like a high-tech grappling hook that pulls players towards whatever object they latch on to.

It has since made its way to Fortnite’s “coming soon” section of the  in-game news feed with the description “Pulls you to anything it hits! Make a daring escape or close the gap to an enemy player!”

Already one of the most highly anticipated additions to the game in recent weeks, the Grappler’s exact release date is still unknown.

It is widely believed that it will be added in Fortnite’s upcoming V5.40 patch, but the usual release time on Tuesday has already been and gone, meaning that the update is unlikely to release until Wednesday or Thursday.