One of the oldest debates in the Fortnite Battle Royale community is about aim assist and whether it offers too much of an advantage to those playing with a controller.

Many who predominantly play on mouse and keyboard can be found complaining about the “overpowered” nature of aim assist and how it can make controller players’ gameplay much easier.

One of the exploits that these players often cite is “ADS spamming,” which involves the continuous pressing and depressing of the button on a controller responsible for getting the player to aim down the sights of a weapon.

Since aim assist is activated every time a player ADS, the constant spamming of the button allows for the aim assist to refocus every time, making it a lot easier to hit moving targets.

This exploit can be seen in action in the clip below, which shows truly how powerful its effects can be when the technique is executed perfectly.

Here’s a clear example of why ADS Spamming should be looked into/removed. Again, I have no issue with Aim Assist, at all. In the video provided you can see ADS Spamming hitting numerous shots on someone who can’t be seen in a Stink Bomb

The clip, which comes courtesy of prominent Fortnite news outlet @FNBRLeaks, demonstrates that the ADS spam exploit can be used to shoot at and hit enemy players who may be not even be visible on the screen.

It also shows how it can be used to hit a player that’s moving at a rapid pace, since the spamming of the button keeps refocusing the aim assist onto the opponent’s body. 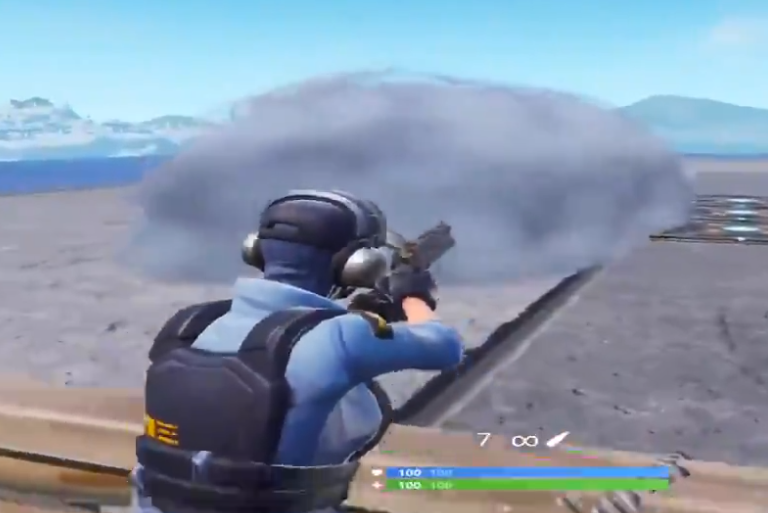 Controller players contend that, despite the apparent advantages of this exploit, having the full control of a mouse still trumps the way aim assist is currently is in-game.

Furthermore, they claim that shooting at enemies that may not be visible due to a Stink Bomb or Smoke is not a legitimate example to bring up since it’ll never really make a difference in actual matches.

While that may be true in most cases, it was not true during the recent Ice Storm event that covered the entire map with snow and fog, as many controller players were joyfully able to shoot at enemies that they could not see through the haze.

When you can’t see but your aim assist can :see_no_evil::raised_hands: pic.twitter.com/VaKwwp9f9w

can't see through the fog but aim assist can pic.twitter.com/sHzNFVPBIB

Just to be clear, no one is really asking for aim assist to be disabled. Almost everyone accepts the fact that aim assist is absolutely necessary to keep playing with a controller a viable option.

What many players are asking is for exploits, such as the ADS spam shown above, to be either patched or nerfed so that aim assist will operate at the levels it was intended to.

Whether or not their voices will be heard, only time will tell, but until then, the age-old debate about aim assist will continue to roll on.