It looks like Fortnite data miners were correct when the leaked a ‘TNT Bundle’ item, because Epic Games have now confirmed that Dynamite is ‘coming soon’!

Very little else was known at the time but it was clear from the leaked images that the item would resemble sticks of dynamite.

The addition of the new item was confirmed in the in-game news section of Fortnite and comes with the following description:

“Light the fuse and wait for the boom!” 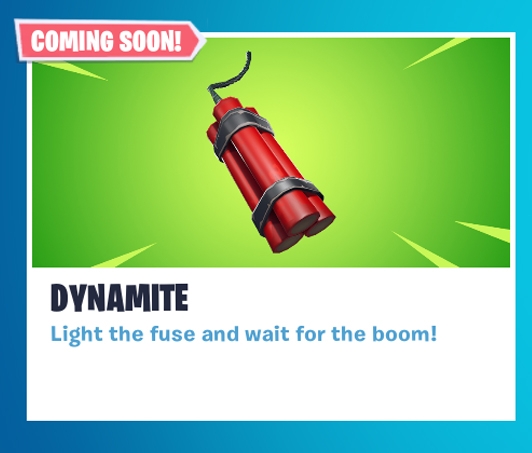 Expect to see Dynamite added to the game in the next patch.

As a general rule of thumb, anything that is announced in the in-game menu is then released in the next major patch. Updates have typically been released on a Tuesday but the schedule has been somewhat less rigid throughout Season 6.

If it is released on Tuesday, though, players could be getting their hands on it as soon as tomorrow (November 20).

Presumably the Dynamite will be on a timer so players can plant it and then retreat to a safe distance to see their opponents go up in smoke. However, Epic Games like to put their own twist on things so we’ll have to wait and see if that is the case!

Stay tuned for more information about the Dynamite, and the patch that it will be released with, as it becomes available.