Popular UK streamer Sophia ‘Djarii’ White founder herself banned from Twitch for 24 hours after being falsely accused of streaming the KSI vs Logan Paul fight.

In fact, at the time of the bout between the two hugely successful YouTubers, Djarii wasn’t even watching the fight, but actually live streaming herself playing World of Warcraft.

Taking to Twitter on Sunday, August 26th, the 24-year-old posted a screenshot of an email she received from Twitch, informing her that she had been issued a copyright strike against her channel, and that she would be unable to stream for a 24 hour period.

Not sure why I’ve suddenly been banned for copyright infringing???? @Twitch @twitchsupport never even rebroadcasted this match, I’ve been playing WoW all day? 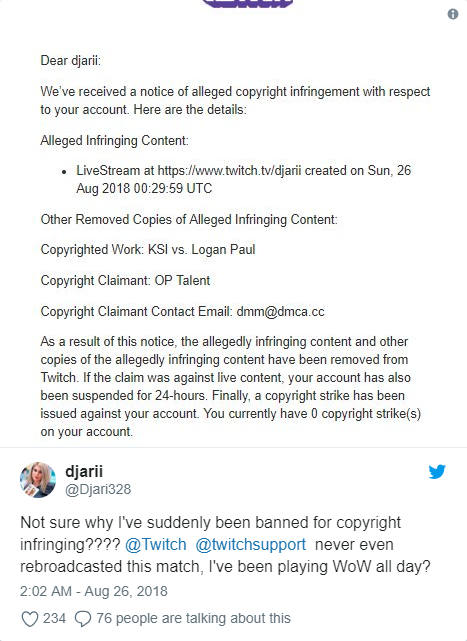 The ban came on a day where White celebrated hitting a major milestone, as she crossed 300,000 followers on Twitch. However, just hours later, the Brit was looking at the possibility of being unable to fulfil sponsorship requirements due to her inability to stream.

Understandably, Djarii was annoyed by the false claim against her, and immediately filed a counter notice to Twitch, who reinstated her account.

Had to file a DMCA counter notice since @OP_Talent FALSELY had my channel banned. Now I’m finally upbanned you can enjoy the World of Warcraft gameplay that summarises the VOD yesterday. 🙂

All the love to @ShengAtLaw <3 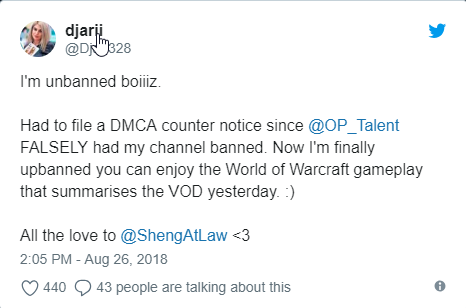 OP Talent Management, who issued the DMCA takedown against Djarii, have since taken to Twitter to confirm that the error was made by a Content ID Company working on their behalf, and have apologised to White for the mistake.

While Djarii was falsely accused of rebroadcasting the KSI vs Logan Paul event, plenty of other Twitch streamers used the service to stream the fight to large numbers of viewers.