Pokimane Has Another Weird Encounter with a Young Kid on Fortnite

Pokimane, a popular streamer on Twitch, recently had the unfortunate pleasure of dealing with a very rude 12 year old she matched up with on Fortnite duos, and now it seems she can’t get away from them.

As many Fortnite streamers do, Pokimane often plays ‘random duos’, where she will search for a duo game by herself and is then matched with another random player.

It can make for great stream highlights, as fans will often recognize the name of their partner and be starstruck, not believing their luck that they get to play with one of their favorite streamers.

But unfortunately, not all fans are so courteous, as Pokimane found out the hard way. Her first encounter, which quickly went viral, had a 12 year old go way too far in explaining how much he liked her.

The young player did however come out and make an apology video following his actions.

However, it quickly took a turn for the worst after Pokimane complimented how ‘cute’ he was – to which the young player responded by just swearing back at her.

The kid didn’t say a single word after this either, completely ignoring Pokimane as she tried to co-ordinate where they would land for the match, and then just leaving the game as soon as he was eliminated.

On this occasion, it seems the player was actually too young to even know who he was playing with, which at least mean that Pokimane didn’t have to endure any over the top comments of affection.

After the first incident, Pokimane took to Twitter to ensure that the reputation of young players wasn’t painted with the same brush:

“I’ve played countless games with strangers and I’ve rarely ever had negative interactions with them, but there’ll always be a few bad apples here & there.” 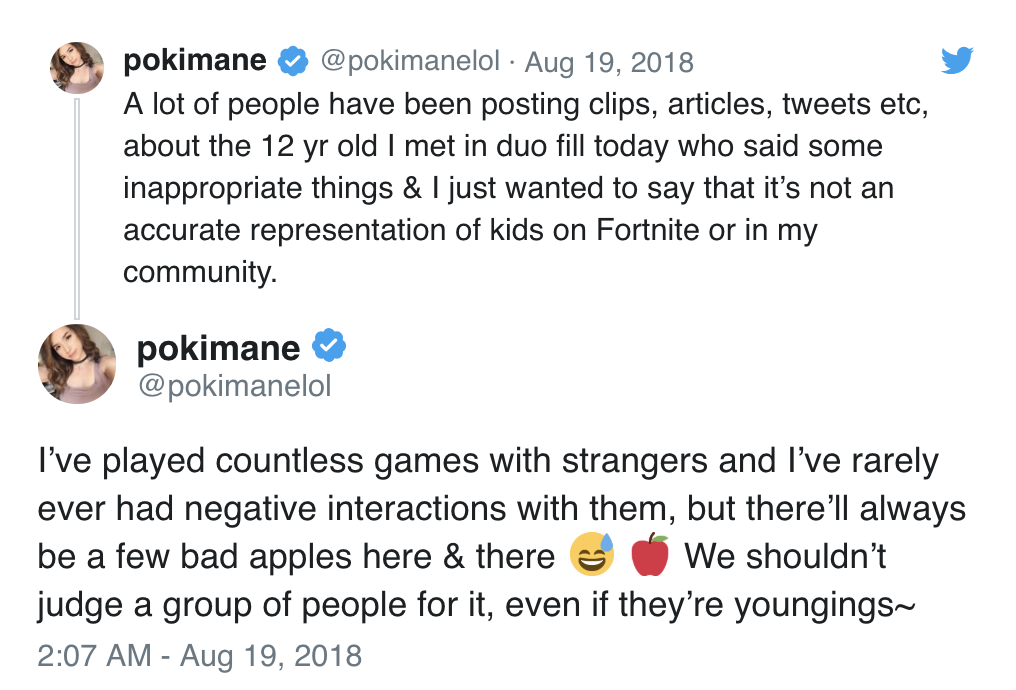 Regardless, Pokimane’s experience with some players, especially of the younger generation, may cause her to be cautious with who she plays with in the future.