Black Ops 4 Zombies fans might have felt a bit overshadowed by the mega-popular shooter’s other modes, but Treyarch has announced a helpful serving of coming updates and features that are sure to revamp its players.

Black Ops 4 was met with incredible reception when it launched on October 2018, and its Zombies mode is now looking to aggregate a ton of new content for its survival-horror mode.

Treyarch is celebrating its annual 115 Day with a slew of content that will grace the undead playgrounds in the months to come such as varying camos, new perks and an update on Gauntlets debut.

As for immediate offerings, Zombies will have a 2XP, 2X Weapon XP, and 2X Nebulium Plasma on all systems starting January 15 until January 18 at 10 a.m. PST. 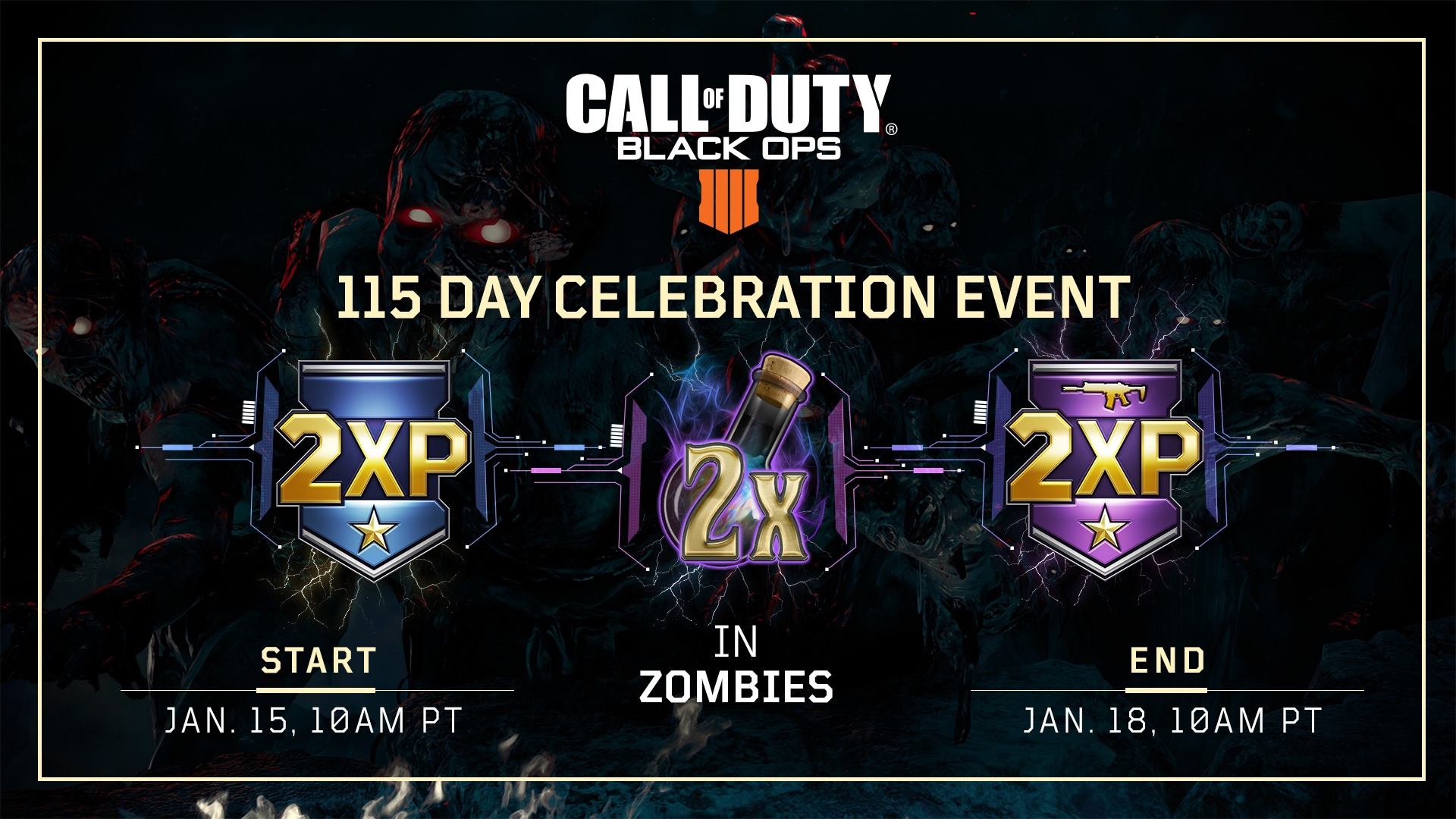 Treyarch wants players to indulge in the 115 Day festivities by offering huge amounts of XP all week long.
[ad name=”article2″]

New Elixirs and changes to existing ones

Zombies will also be welcoming new Elixirs in the form of Perk Up that gives four random perks outside of a loadout, Refresh Mint that resets perk/equipment cooldowns for the entire team, and Conflagration Liquidation that spawns a Bonfire Sale power-up.

The company stressed that a lot of these changes will be experimented with in the backend, meaning if players don’t see an immediate change then it’s probably on purpose.

The game is going to give six Elixirs an update including Sword Flay that will now instantly kill Basic and Vermin while dealing 5x damage to all other enemies and Cache Back that has been downgraded to Legendary giving players a better chance of crafting it. 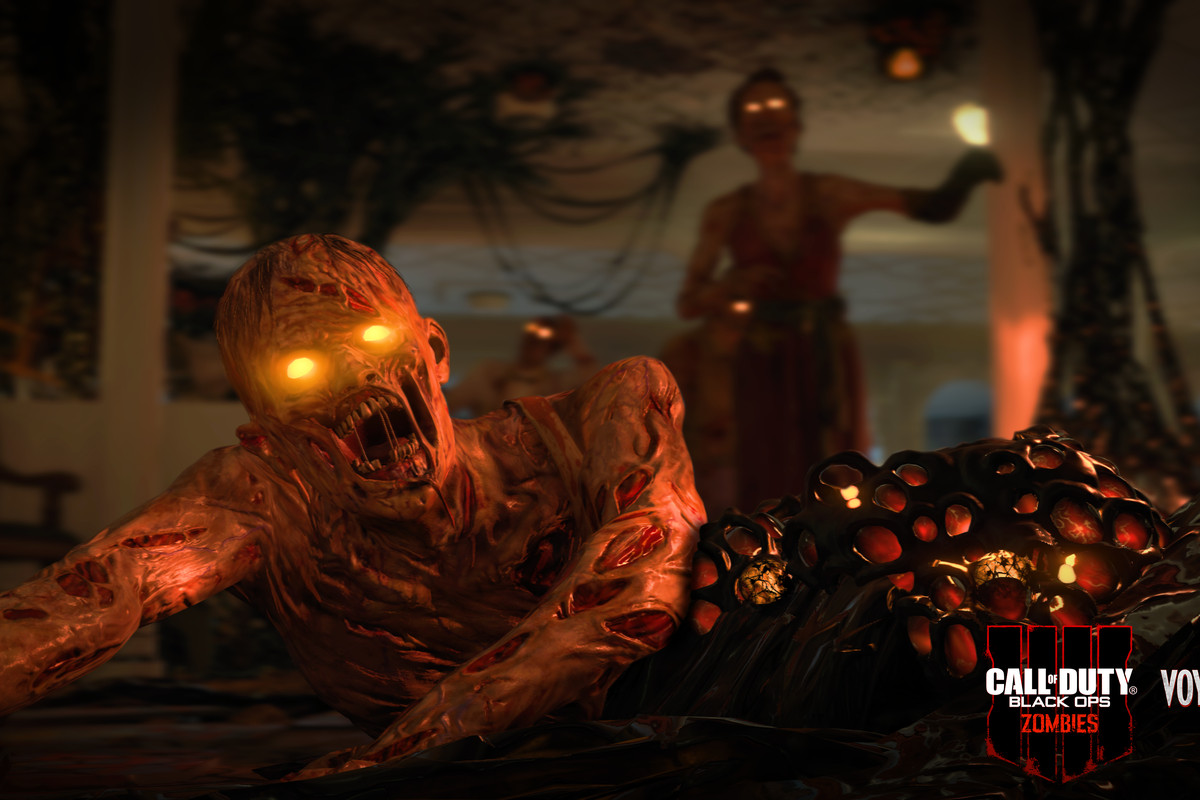 There will be more ways to kill the undead are coming in 2019.

Unique camos are coming to Zombies in the form of Gold, Diamond, and Dark Matter master camos. While opening up Mastercrafts, Reactive Camos and more items acquired in the Black Market usable in Zombies.

Zombies mode is also getting more firepower as the MP 40, Grav, Daemon 3XB and SWAT RFT will help players tame the undead.

Treyarch wants their undead mode to become more user-friendly by letting players have more control of their Zombies parties. The company will want to introduce highly anticipated features such as Host Migration, Server Pause and Split Screen Pause in the coming months.

The company also outlined the upcoming Factions Callings that will look to play as events for Zombies where players can test themselves with special challenges that will reward them with equally unique rewards.

January 15, AKA 115 Day – a nod to the notorious Element 115 from Call of Duty Zombies lore, for those of you scratching your head – holds a special place in our hearts. This week, we’re excited to celebrate our global Zombies community with a special Zombies 2XP in-game event, the debut of Gauntlets and new Elixirs on PS4, a preview of what’s coming to Zombies later this month, and a look ahead at what to expect in 2019. Let’s get into it.

How about some Zombies 2XP to kick things off? Now live through 10AM PT on January 18, Zombies players earn 2XP, 2X Weapon XP, and 2X Nebulium Plasma on all platforms! Get out there and slay to your heart’s content, because we’ve been working on some new Elixirs and bundles to brew up with all that newfound Nebulium.

First up, let’s talk about our newest Zombies feature with the introduction of Gauntlets in Voyage of Despair.

We’re excited to debut Gauntlets in Zombies this week on PS4, starting with “Unsinkable” in Voyage of Despair! Gauntlets in Zombies are endlessly-replayable, 30-round challenges with unique rules governing gameplay in each round. Players earn medals and tiered rewards for completing rounds 10, 20, and 30, as well as a unique reward to adorn your Emblem for completing round 30 without failing a round. Sound easy? Think again.

The rules of engagement change each round, including weapon restrictions, area defense challenges, health-drain modifiers, time limitations, and much more. You and your crew will earn a Strike by failing a round, and after three Strikes, it’s game over. Mastering all 30 rounds will test the skills of even the most seasoned veterans, and only the best zombie killers will conquer an entire Gauntlet with zero Strikes.

We’ve also designed Gauntlets to be played competitively, with permanent rules for reach round and a timer running during every match. We can’t wait to see the incredible speed-run records our community come up with! Jump in today and show us what you can do.

We’re adding three new Elixirs to craft in the Laboratory starting this week on PS4: Perk Up, Refresh Mint, and Conflagration Liquidation. These powerful new Elixirs are all Epic in rarity, and their effects can make all the difference between life and death in a sticky situation. Here’s the lowdown:

Perk Up: Gain 4 additional random Perks that are not in your loadout.

Refresh Mint: Refreshes the cooldowns for Equipment, Perks, and Special Weapons for your entire team.

Join The Party: Now revives downed players in addition to respawning dead party members, but will not restore lost Perks.

Sword Flay: Melee attacks now instantly kill Basic and Vermin enemies for the duration, and deal 5X damage to all other enemies.

CTRL-Z: Increased the duration of turned zombies from 15 seconds to 30 seconds.

Cache Back: Reduced rarity from Epic to Legendary to increase the chance of concocting Cache Back more frequently.

Blood Debt: Duration reduced from 3 minutes to 1 minute, and Blood Debt now simply ends when points are reduced to zero, rather than killing the player.

You might see some new Concoction bundles in the Laboratory over the coming weeks while we test out some fresh combinations, so feel free to try them out and let us know what you think! If you don’t see anything out of the ordinary this week, don’t worry – we’ll be tinkering with different offerings behind the scenes, and everyone will get a chance to check out these new bundles soon.

We’ve got more exciting Zombies features planned for the coming weeks, including:

Mastery Camos: Gold, Diamond, and Dark Matter camos are coming to Zombies with their own unique Challenges to complete in the Armory. These camos represent the highest level of achievement in Zombies weapon mastery, so get out there and show off your skills.

New Perk: Our first new Perk is coming to Black Ops 4 Zombies in the near future! Look for more details as we get closer to this update later this month.

New Gauntlet: Today’s Gauntlet in Voyage of Despair is just the first of many to come. Keep an eye out for our second Gauntlet later this month.
But that’s not all… let’s take a look ahead into what’s coming to Zombies over the next few months, shall we?

Black Ops 4 Zombies is the biggest and most ambitious Zombies mode we’ve ever created, with five unique experiences already available within two months of the game’s launch. Now that Dead of the Night has been released to the world, we’re heads-down on developing the next series of features and content scheduled for the coming months, in addition to upcoming gameplay improvements, bug fixes, and quality-of-life updates.

Plans for the coming months include:

Host Migration: We’re always working on ways to improve the public Zombies experience, and host migration will help to ensure everyone in a match can continue to enjoy the game if the host player disconnects. This will be a key priority for the team after our 1.12 update goes live.

Server Pause: For the first time in Call of Duty Zombies, we’re planning on allowing hosts to pause the game at the server level during online matches! At last, bathroom breaks during all-night Zombies sessions can become a reality.

Splitscreen Pause: While adding the ability to pause online matches is a priority, we’ll also add support for pausing splitscreen matches in an update shortly afterward.

More Gauntlets: We’re currently planning to release a new Gauntlet with each major game update throughout the year, beginning with “Unsinkable” in Voyage of Despair and continuing with the next Gauntlet in our 1.12 update.

Faction Callings: This is the big one. Faction Callings, or “Factions”, is planned to be our most intricate new feature coming to Black Ops 4 later in 2019, and as such, will require the most time to complete the engineering, scripting, implementation, and testing needed before going live in the game. Faction Callings are designed to feature a full season of 12 unique challenge events across all Zombies maps and game modes that reward players with never-before-seen character customization loot. Completing each event will culminate in Faction-based narrative reveals that flesh out the Zombies universe even further.

These details are subject to change during development, and we’ll have more info on each of these features as we get closer to releasing the updates containing them – and later today, we’re excited to share more Zombies intel from the man himself, Zombies Director Jason Blundell, in our Zombies Twitter Q&A live from Treyarch.