The first phase of the $1.25 million CWL Finals weekend has now wrapped up, as the Play-In tournament came to a close on July 19.

Although there technically wasn’t any money on the line at the Play-In tournament itself, for the eight teams that didn’t qualify for the CWL Pro League Playoffs, the competition meant everything.

The four bottom teams from both Division A and B came into the tournament knowing that their final chance at competing in the Playoffs was to be one of two teams left standing from the single elimination bracket, in which every match, every map, and even every round, had a special kind of intensity to it.

Once the dust settled, the two teams remaining were Luminosity Gaming and Evil Geniuses, both of advanced to join the top eight teams from the Pro League regular season in the Playoffs. 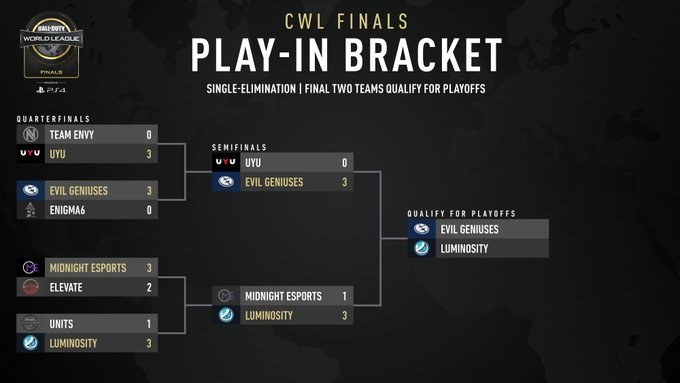 The completed Play-In bracket after LG and EG were the last two teams standing.
[ad name=”article3″]

That said, here is the updated Playoff bracket following the Play-In. LG are slated to face Team Heretics while EG will do battle against Team Reciprocity.

You can keep up with all of the action, including all streams, scores, brackets, schedules, and more, by visiting our dedicated CWL Finals hub. 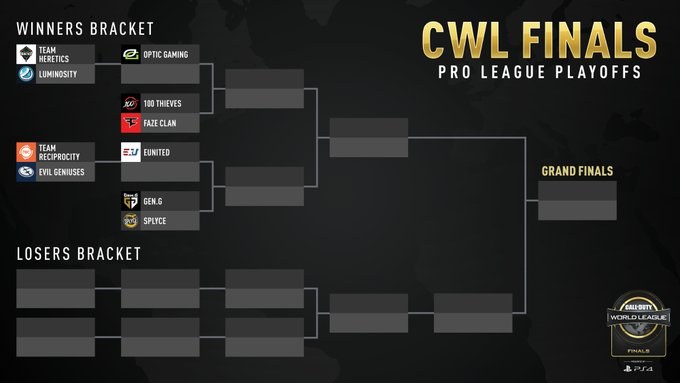 After finishing the CWL Pro League regular season with a disappointing 8-14 record, there were major question marks surrounding EG coming into the Play-In

However, the team made as strong of a statement as they could have, defeating both Enigma6 Group and UYU in 3-0 fashion.

The squad looked as locked-in as ever during their matches, which was made clear when the broadcast went for a listen-in during their map one Hardpoint victory against UYU.

.@EvilGeniuses grab the opening Hardpoint over @UYU, take a listen to their comms in the @ASTROGaming Listen-In! pic.twitter.com/9PTJ3YletW

Luminosity power through Play-In with hardly a scratch

Much like EG, there were many who doubted LG’s ability coming into the Play-In, considering that their regular season had been nothing short of a disaster.

Their late-season roster changes had some positive effect early on, and they really showed through during the Play-In, as LG defeated Units and Midnight Esports to qualify, both with a 3-1 scoreline.