Flavor-of-the-month Twitch sensation Escape From Tarkov has blown past the viewership records from World of Warcraft Classic’s massive launch month, clocking up nearly 200k average viewers in January so far.

Escape from Tarkov’s recent explosion on Twitch has been nothing short of meteoric, with the 2016 title flying to the top of concurrent viewership charts, and roping in major streaming names like Dr Disrespect and Benjamin ‘DrLupo’ Lupo.

According to TwitchTracker, Battlestate Games’ military roleplaying game, which challenges players to survive as long as possible in a harsh player-vs-player world, is even dominating titles like World of Warcraft in its surge. 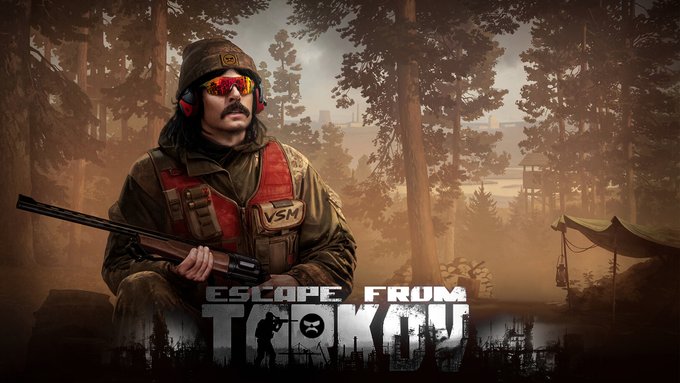 There’s no denying WoW Classic’s re-launch in August 2019 was one of the biggest gaming moments Twitch has seen for a long time. There are always games that spike in popularity, but Blizzard’s nostalgic MMORPG blew them all out of the water.

Now, it looks like Tarkov is on its way to challenging the fantasy titan for a place in the annals of streaming history. Just days into 2020, the FPS is already boasting more than 182k monthly average viewers, and doesn’t seem like it’s slowing down.

Already, Tarkov has celebrated one of its biggest ever days — on Saturday, January 4 it dialed the records up to eleven with a 232k day, before beating its own peak the very next day with a massive 296k average viewers.

In comparison, WoW Classic’s biggest months were August and September last year, when it clocked up 91,242 and 124,718 average viewers respectively. WoW did boast a higher peak on launch day, with more than 1.1 million fans piling on to watch players that had beat log-in issues, but that pinnacle didn’t last long. 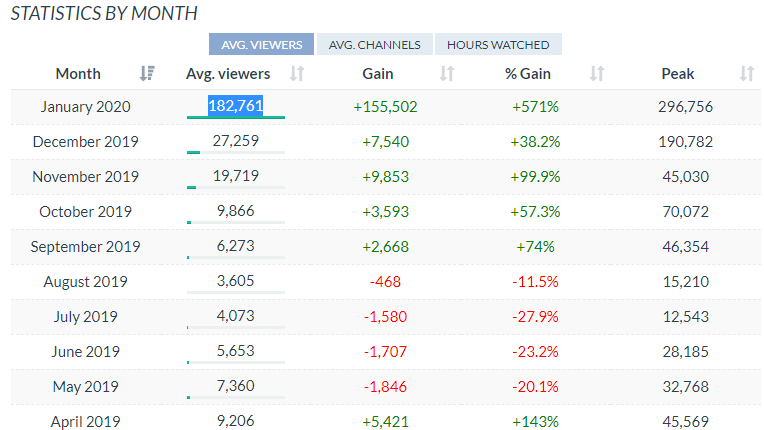 Escape from Tarkov’s explosion in popularity in 2020 was unexpected and surprising.

Why is Escape From Tarkov exploding on Twitch?

For a game that’s nearly two years old, it’s a bit strange that it’s alpha-state has finally exploded in the streaming world, but there are a few reasons behind Battlestate’s hardcore FPS finally finding a more permanent way into the public eye.

For one, the developer’s enabled Twitch loot drops in a marketing run for the new alpha release, meaning anyone tuning into livestreams of the game would score some rare in-game cosmetics for their troubles.

This, in turn, led to major names like Dr Disrespect, DrLupo, and even Just Chatting star Hasan Piker jumping into the hardcore world to take advantage of keen viewers, with many smaller streamers joining the bandwagon too.

On top of this, it’s just a fun game to watch, with twists and turns, and the finality of deaths creating some great streaming moments, and even some great rage quits.

Between the chance for free loot, and some of the platform’s biggest names hitting play in the first days of 2020, the hype hit fever-pitch. Escape From Tarkov brushed past FOTM game Jump King aside, and took control of the charts.

The question on everyone’s lips now is can Escape From Tarkov keep up its momentum on Twitch?

Can this level of hype on Twitch last for Tarkov?

Now that Tarkov is the game on everyone’s lips, there’s another question that’s beginning to form — can the military shooter maintain it’s strength on the charts?

The obvious answer is, of course, no. Not even WoW Classic, one of the most hyped gaming releases from modern times, could retain the pure domination it showed on Twitch, and has now dropped down to 25k average viewers per month.

There are also some that believe Tarkov’s viewership records have been inflated, including gaming consultant Devin Nash, who has been immersed in streaming culture since he stepped down as Counter Logic Gaming’s CEO.

According to Nash, EFT’s numbers look “bullsh*t,” especially when compared to World of Warcraft, and he suggested on January 6 there was “no f*cking way” the FPS could even hold a candle to the fantasy game in terms of views.

Escape from Tarkov was first released in 2016, and has remained basically dormant on Twitch until its explosion in 2020.

Then again, Tarkov’s hype has done its job: last month, only Mixer superstar Michael ‘shroud’ Grzesiek — who said he has little faith streamers will stick around — was playing the game. Now, the Doc and DrLupo have both bought in, with the Two-Time even suggesting he’s “pretty addicted.”

With some major names behind it on both Twitch and Mixer, Tarkov is sure to stick around for a while. It may not compete with mainstays like League of Legends and Fortnite for long, but it certainly won’t fall into obscurity again just yet.